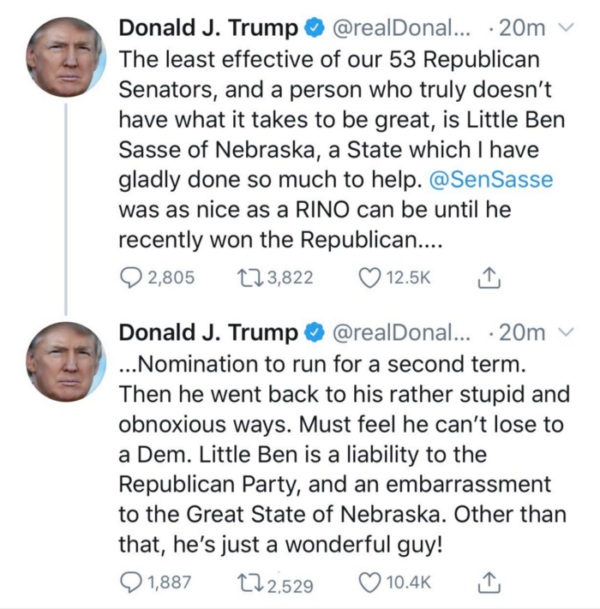 Trump’s abusive, bullying tone is a narcotic to MAGA. Hypocrisy, lying, tax fraud, adultery, and allowing 210,000+ Americans to die from Covid is fine with them. Their own histories of trauma inform their addictive need for authoritarian leaders.

Creating a culture of ongoing chaos and violence feeds MAGA’s core appetites, born out of generations of untreated trauma and abuse. They call Trump their “payback.” This is why white nationalists love Trump. Racism is a powerful form of destructive chaos. As is sexism.

When Trump admitted to sexual abuse on tape during the 2016 election, it confirmed his authoritarian credibility with his base, because it made liberals/progressives so angry and reactive. That’s the narcotic. Other’s horror and shock.

This is the slippery slope of authoritarians like Trump. It’s why MAGAs supports his worst decisions, deceptions, lies, and violence. If pressed, they may even doubt these decisions, but the rage and shock of the rest of us are a narcotic they can not resist.

This is the slippery slope. Trump’s MAGA base supports more and more shocking atrocities. Children in cages, letting Americans die from Covid. Eventually, the narcotic of authoritarian shock needs to be increased, the doses made more extreme. Genocide.

Trump’s base will never abandon him because they want to do violence to the rest of us, and he is their weapon. The question we must ask ourselves is: why are so many Americans so traumatized that they wish only harm on the rest of us? What went wrong in America?

MAGA’s are a reflection of an America that does not care about individuals, that fails to bring everyone along, that let’s poverty run rampant, that offers not a hand up, but the brutality of the prison industrial system.

For now, we must put out this terrible fire that is Trump and Trump’s Republican Party, feeding on the pain and trauma of millions of MAGA. We must go to the polls and elect Democrats in a landslide, but we can not stop there. Our work is only beginning.

If we don’t fix America’s brutal, violent domination-based social, political, and economic systems, systems designed to drive wealth and power to the few at the top, we will not survive as a nation. We, as Democrats, have to understand this now.

Time is running out for us all.