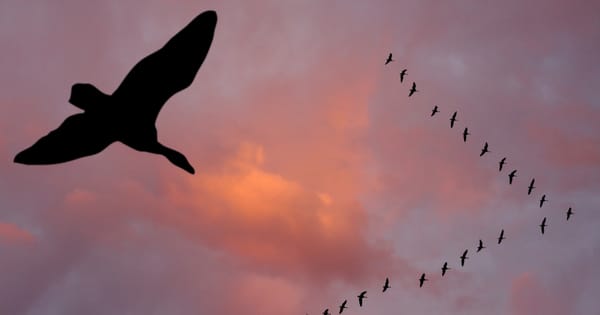 …Tell me about despair, yours, and I will tell you mine.
Meanwhile the world goes on.
Meanwhile the sun and the clear pebbles of the rain
are moving across the landscapes,
over the prairies and the deep trees,
the mountains and the rivers.
Meanwhile the wild geese, high in the clean blue air,
are heading home again…

Indulge me a story about myself. I’ve been thinking about this recently, the memory resurfacing with the considerable political and media attention given over the last few weeks to 9/11. I was a still a young man at the time, living in Hoboken, New Jersey, and working in lower Manhattan.

I was also at a crisis and a crossroads in my life: I was separated and moving toward divorce, my first marriage had imploded months earlier, and I had started a new job where I had yet to gain solid footing. I had also found new love, which brought up the contrasting need to let in and to let go, a back and forth emotional rocking that left me alternately energized and drained, my mind grappling with what had happened and where I was going.

The morning of the attacks I took a train to work, as I always did. I arrived at my stop and noticed people lined up on the sidewalk, oddly quiet, their gazes directed downtown. Living in the city for years had made me indifferent and conditioned to difference.

My thought was that they were queuing up for tickets to a concert or a show or waiting for some free offering at a hot new eatery, and I trudged, head down, to my office a few blocks away. It was there, when greeted by a frantic colleague, that I learned that a plane had crashed into one of the Twin Towers. After finding a television and watching the unfolding horror, I returned to the street. No longer were people standing and staring in stoic silence, but scrambling and shouting in fear and despair.

I cannot begin to fully understand the pain and suffering of the people trapped in those buildings that morning, the agony experienced by those who perished in such unthinkable circumstances. Nor can I adequately capture in words the heroism of responders, the police and firemen and all the others who charged into sheer hell to help save lives, and in doing so lost their own. Then for weeks and months, even years after, painstakingly digging through rubble to find the remains of those who had fallen, trying to bring closure for the families, and dignity to the departed. I just can’t do justice to this heroism and selflessness on the page.

I cannot also begin to fully understand what was in the minds of those who perpetrated these suicidal attacks, the depth of anger and self-righteousness that might be needed to carry out such carnage, the driving force, whether it be missionary zeal, religious fanaticism, nationalistic fervor or other motivations, behind such violence. It is beyond me to make sense of the senseless.

But Dubium sapientiae initium (Doubt is the origin of wisdom), wrote philosopher René Descartes. After 9/11, fortunate as I was to be safe and sound, and more to have lost anyone I knew in the tragedy, I, like countless others, was awash in doubt, the instability of my personal life swamped by the tidal wave of uncertainty and disbelief and shock over what had happened. Living in Hoboken, I spent the next several evenings alone, sitting on a pier at the waterfront, watching just across the Hudson River, the blanket of smoke enveloping the World Trade Center. From that vantage point, I would experience emotion after emotion, trying to process the pain, to ward off feelings of hopelessness, to quell rising rages and thirst for revenge and once again see the good in people.

As hard as I tried, however, I could not shake the feeling that humanity had passed a tipping point, and that we were sliding down a slope of cruelty we could never recover from.

Then, one beautiful and crystal clear evening at dusk, I saw, gliding through and past the dissipating smoke, a flock of geese flying south in V-formation. The sight moved me to tears. At that moment, my doubts gave way to a much-craved for and a much-needed clarity that calmed and comforted me: While the human world was out of order, the natural world was not. No matter our struggles, these geese, supporting each other in their journey, working as a cohesive team to save energy and to stay oriented, watching out for those who falter or stray and bringing them back to safety, continued to follow an inner guide, a purer instinct.

The wisdom it gave me was not just that life moves on, but it can move on with grace and beauty, in pristine and primitive perfection.

And that in the overwhelming face of chaos and crisis, when things seem lost or broken forever, we can take heart that they are not, and find sustenance and strength that we are a part of such a wonderful world, intimately linked with the grounded glory that is nature: be it the crocus that comes up from a thawing soil, the salmon fighting its way upstream, or geese soaring overhead on their way home.

Facebook90TweetPin2EmailShares92
wpDiscuz
Share this ArticleLike this article? Email it to a friend!
Email sent!