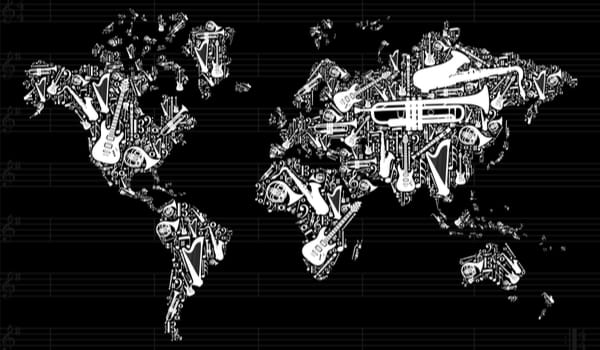 In an era when citizens theoretically have the opportunity to listen to more voices than ever before, they are exposed to fewer.

And as a direct result, the music industry is not dying as many people misconceive but is actually growing—generating revenue to the tune of over 50-billion dollars a year.

Yes, we live in a world where Justin Bieber concerts gross 4-million dollars a night.

Despite over 100,000 music releases annually in the USA alone, the majority of countries will have none. But it is not for lack of product. It is based on the reality that most music on earth remains imprisoned within its own linguistic borders.

And, this disproportion in distribution is not a case of 100,000 to 1, which are already ridiculously unfair odds.

Extrapolate that out over a decade and we have a million-to-one (or less) odds, an indefensible and unsustainable equation for democracy.

Meanwhile, as inventors of most one-way communication technologies, the English-speaking media has pervaded almost every corner of the globe for decades and re-colonizes the world daily with western imagery.

The song continues on long after the departed are gone.

English is the third most spoken, but debatably most hated language in the world since most people do not choose, but are forced to speak it for their own economic survival (e.g., unlike someone learning Finnish or Cherokee simply because of admiration for the way they sound). One Portuguese musician I know goes so far as referring to English as a “speech impediment.”

Unknowingly privileged people from the West often protest that it is “difficult” to listen to music in a foreign-tongue. But this argument is highly selective. For if that same person was pressed to recite the lyrics to the majority of pop songs— including those that they have heard hundreds of times— they would prove completely unable. Even in the case of their favorite songs.

If then asked, at minimum to provide a synopsis of at least the gist of what a given song is about, many listeners would also be unable to do even that. And, in fact, instead they often falsely believe that the song is about the exact opposite of its literal meaning.

“Born in the USA” a patriotic jingle?

Yet, what an avalanche of outrage would result if for even a single morning every television set and radio station in New York City blared out nothing but Basque. Yet, this is the equivalent that has been and continues to be the case for almost every other place on the entire globe since at least WWII.

I propose that artists past their prime should be issued anti-recording contracts— to be paid to stop releasing music and thereby to help unclog cultural circulation of excess and refuse, halting the collective aesthetic carnage.

I would happily donate $50 or more to any Kickstarter campaign urged the Rolling Stones to never again release another album. Ever!

Even better would be retroactive recording contracts— whereby legends would be justly rewarded for annulling and unreleasing their more lackluster material.

Does the world really need another Neil Young song? Did he really have more than one (or maybe two) to begin with?

Do we really benefit any longer from hearing yet another group of white, straight males whine to standardly-tuned guitars?

Not a hairsbreadth as much as we would profit from listening to an artist from the Central African Republic or Laos or anywhere but “here.”

For the price of the soy decaf cafe-latte and Coconut Water budget during the rendering of the latest corporate star-merger single, literally hundreds of albums from the least wealthy nations of the world could be made instead. But in their steed, we are offered up gilded turds, slathered as “comebacks”— a return to form hype. We are blue-balled ceaselessly by promo-machine fed false prophets, spitting out confectionary misdirections.

Can you hum one song by Bon Jovi from the past three decades? Or Paul McCartney? Sting or Roger Waters?

Yet, who here has not involuntarily been bombarded by “Living on a Prayer” at the mini-mall or “Comfortably Numb” while boarding an airplane or standing in line at the grocer— held hostage and force-fed piped tuneage.

How many artists are there really that you can get past your hands counting the number of great songs harvested from throughout their generations-long spanning career?

The music industry has a dirty, dark secret. There are millions upon millions of talented people around the world. And you will never hear any of them. They’ve been made disappeared, silenced by sound.

A truly democratic system would be music released with complete anonymity: no photos, no names, only music. Songs without faces nor bios.

Just sound standing on its own.

Ian Brennan is a Grammy-winning music producer (Tinariwen, Ramblin’ Jack Elliott, Zomba Prison Project) and the author of five books. He has worked with the likes of filmmaker John Waters, Fugazi, Flea, country-legend Merle Haggard, and Green Day, among others. Since 1993 Brennan has taught violence prevention and conflict resolution around the world for such prestigious organizations as the University of London, the Smithsonian, New York’s New School, Berklee College of Music, the University of California–Berkeley, and the National Accademia of Science (Rome).

Facebook178TweetPin1EmailShares179
wpDiscuz
Share this ArticleLike this article? Email it to a friend!
Email sent!