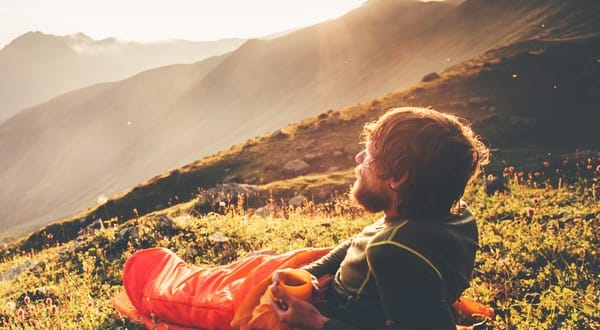 —
Did you know that Oklahoma has mountains?

When Diana and I started our reconciliation journey, one of the things we decided to do was to be more intentional about taking some extended private time.

We didn’t vacation much in the early days of our marriage. We took our honeymoon in 1994, and after that, trips were mostly for weddings and funerals. It’s really hard to travel with as many kids as we had, especially as young as they were.

Our church district holds a retreat for the pastors and spouses each year in Branson, and we’ve been able to attend that for the last several years. This year though, it was the weekend immediately following our daughter’s wedding, so we decided to skip it. The retreat, not the wedding.

That made scheduling our getaway a little difficult, because we had the wedding to get ready for, then school was spinning up, and one of our daughters is dancing in Nutcracker this year, so the weekends are busy.

But we ended up finding a place called the A to Z Guest Ranch, in Smithville, OK. We were planning on going in early November because that was the best weekend, but the cabin we wanted was booked for both of our open weekends.

But it was open for the last weekend in October.

Diana called and set up the reservation. We took the Mountain Country Cottage and the Sweethearts Getaway package that included all meals, a two-hour trail ride, and two hours of ATV fun on our own.

Getting to the cabin was something of a battle.

My car had been in the shop for a couple of weeks getting a new engine (does that sound familiar?), and I picked it up late Friday morning. I had a physical therapy appointment that, for some reason, I scheduled at the same time we picked up the little boy who we babysit. Except that I didn’t make it to the appointment because one of the transmission lines came off of my car on my way in. Ninety later, I was headed home from the shop with the line reattached and fresh transmission fluid. That put us behind schedule to get down to the ranch, and we were sort-of concerned about our arrival time versus the 7 PM dinner.

We didn’t need to worry.

We got to the ranch about 6:30 PM and were in the middle of checking out the cabin when there was a knock at the door. It was Zondra with our dinner. She said she didn’t want us to have to rush around, getting settled in, then walk back over to the dining room in the dark.

That set the bar for service over the weekend.

The Mountain Country Cottage sits next to Cucumber Creek in a back corner of the ranch. It was dark enough when we arrived that we couldn’t see much beyond the creek. Its burbling and bubbling were a pleasant accompaniment to the evening.Weekend in the Mountains

The cabin has a gas fireplace, which we didn’t need during our visit, and a hot tub, which we checked out Friday night. Our hosts had set the TV to the SiriusXM Love Channel, which was playing Chicago’s “Hard To Say I’m Sorry” as we walked in, setting the mood nicely. We left the channel playing as we sat down to dinner, and we enjoyed the trip down memory lane. The channel seemed to be playing a lot of songs from the eighties and nineties.

The food throughout the weekend was incredible. On the ranch’s website, Zondra says she’s a chef, and that’s easy to believe. Dinner the first night included barbecue beef, green beans, and macaroni and cheese. Dessert was a disturbingly rich apple cobbler. I don’t doubt that the macaroni and cheese was homemade.

Breakfast the next day was fresh eggs and bacon, along with waffles with fruit and whipped cream. I’m pretty sure it was real whipped cream, too. Lunch was a ham and turkey sandwich along with soup made from last night’s leftovers. Dinner Saturday night included ribeye steaks, baked potatoes, and a very good salad, all of it topped off with a raspberry cobbler. Sunday’s breakfast was quiche, blueberry muffins, and a fruit cup. It’s easy to see that Zondra is a very talented chef, and loves to cook.

I wasn’t entirely clear on how much land the ranch actually owns, but we had access to 1400 acres. I think Zondra explained that they owned about half of that, and had permission to use the other half. The ranch is located near the western edge of the Ouachita National Forest, and some of the views were just absolutely spectacular.

I’ve said before that “things are different in Oklahoma,” and here was another example. At the farm in northwestern Ohio where we’ve done most of our horseback riding, things are fairly regimented. There’s a short instructional session for everyone going out on the trail ride, because the groups usually aren’t segregated by skill. You might have some very experienced riders going out with someone who’s never been on a horse before. They’re also fairly strict on how fast you’re allowed to go, restricting riders to no faster than a trot. I understand why they do that, for the most part. Because of the size of the groups they take out on the trail, and the variety of experience levels for the riders, it makes sense, especially from an insurance standpoint.

Here at A to Z, Greta asked if we had ridden before, and how long it’d been since we’d ridden. She asked if we needed a refresher course, and then helped us on our horses, and we were off. Then again, for the first half of our trail ride, there were only four riders plus Greta.

We spent a glorious two hours trooping along Saddle Rock Creek, and climbing up into the mountains that surround the ranch. “Fun” doesn’t really come close to describing it. About an hour and a half into our horseback ride, we came across a meadow scattered with white pines that towered forty and fifty feet in the air. The only thing that you could hear was the creaking of our saddles, and the horses’ breathing and hooves.

After lunch, we got to run around part of the ranch in their Polaris Ranger UTV. I’ve ridden in one several times before, and they’re a lot of fun. Zondra provided a map to a pair of small waterfalls that were a pleasant find.

Here’s a brief compilation of some videos and photos I shot over the weekend.

Probably the best thing about the weekend was that we were completely off-the-grid. The ranch is down in a bit of a hollow, and T-Mobile’s signal doesn’t reach down there. Our cabin was far enough away from the main lodge that we couldn’t access the Wi-Fi signal to call out that way, either.

I don’t think we missed being connected to the outside world.

We had a great time at the ranch. There’s a guest book in each cabin, and in our note, I wrote that I appreciated the opportunity to rest, recharge, and reconnect. We didn’t do a whole lot this weekend except hang out with each other, but sometimes, that’s all you need.

Don’t forget to sign up for my newsletter. That’s where I’ll announce preorders and things like that. It’s otherwise very low traffic. Subscribe to the blog via the link in the right sidebar so you never miss an update here, either. You can also add my RSS feed to your favorite reader. And of course, I always appreciate readers sharing my posts via social media shares.
—