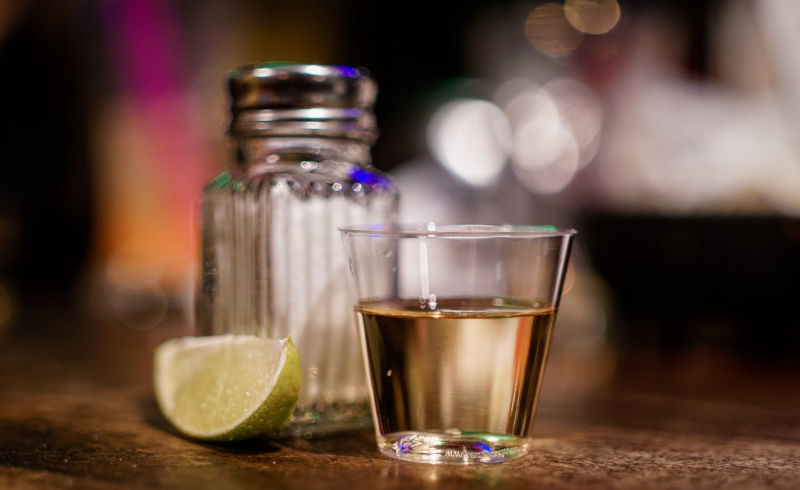 Tequila and my dad were besties for a long time. Tequila was the type of friend that manipulated him into becoming a different person. My dad, eager to please, reluctantly morphed time after time. His comrade in crime was always ready. Eventually they created a vacuum-sealed life that prevented anyone besides themselves from getting inside.

The leftover words that hadn’t been forgotten on their way to blackout.

Their relationship evolved. Like many co-dependent situations, they became an “Us” and put themselves against “them.” The them was me. Daddy and I went from being the best of friends to severed. They disagreed with the boundaries I set — “Don’t call me if you’ve been drinking.” They couldn’t handle it. Instead, they called me a collection of names that they’d cleverly (or lazily) assembled together. A string of slanders that could be used as nouns, verbs, or descriptors slurred together like leftover soup. That’s kind of what they were. The leftover words that hadn’t been forgotten on their way to blackout.

I took 9 months in 2018 and grieved the loss of my Daddy. He was gone and what or who was left in his body I did not know. Mourning his loss allowed me to accept the person that he’d become. I no longer wanted to change him. All I wanted was to love the new version of him well for and appreciate what he represented without resentment for who he was. Our relationship lacked substance. As any person who loves an addict understands, there’s a void from knowing what used to be there. I’d keep him updated on my whereabouts, knowing he wouldn’t remember. He’d tell me the same stories and gossip about my family. It was dull and sometimes seemingly pointless, but it wasn’t heartbreaking as it had been before. There were rare moments when I’d catch him at the right time. The right time, I assume, was when Tequila had run out to the store or was taking a shower. The precious moments I caught him alone made all the other mundane encounters worthwhile. It was like gambling, but better.

Those precious minutes kept a tiny bit of hope inside of me alive. The clarity of his voice. His ability to comprehend what I was saying and respond. I wanted my Daddy back, and these tiny gems told me that there was still a chance because somewhere in that body he still existed.

The slightest bit of hope can make all the difference.

The pandemic quarantined my Daddy and his 80 proof partner. They endured a lot together over 2 months. First, an upper respiratory infection that postponed a,“This should be tested immediately,” mass in his mouth. When the mass was eventually tested, its results were also delayed because of the staffing consequences of the pandemic. Ultimately, he received a Stage I cancer diagnosis. This was quickly followed by a Stage IV cancer diagnosis. Then a positive testing for Covid-19, which pushed his new, “This should be treated immediately,” recommendation back further.

Daddy, Tequila, Cancer, and Covid. The foursome created a pandemonium. As his fear increased his need to self-medicate, he became an even emptier version of himself. His body was there, but there was no soul. No reason. No will. Just a hollow man, a victim of life, waiting for it all to end. Eventually, he told me he couldn’t care for himself anymore, it was too much. I started grieving again, but this time with anger directed at myself.

Hope brought me here. My relentless optimism inevitably brought me to my knees. If I’d just let it go before I could have saved myself the heartache now. That’s the problem with hope. It’s just like tequila. The potential for change makes it a welcome party. It doesn’t make any guarantees, and, like tequila, it often doesn’t change things the way we think it will.

I crumbled sobbing on my apartment floor and called the only person I could think of who could understand the depths of my despair and my dwindling hope.

My mother and I have spent the majority of the last fifteen years, not speaking. My parents divorced 20 years ago and immediately became estranged. I called my mom, gasping for breath in between sobs. She listened the best she could, trying to decipher my words in between my desperate gulps for air. She knew. My dad called her on the way from the hospital a week before let her know what was happening. The problem with tequila is that it can’t drive you to the hospital or help you call 911. My mom was the last person my dad could call that lived near him, and so, out of nervous preparation for the worst, he’d called her.

She didn’t try to save him or fix him. She just let him be the version of himself that he was.

My mom is a good woman. Her heart is vast, and she finds value in providing for other people. After my phone call, she asserted herself as a positive force in my dad’s life. The action alone was surprising but I think the manner in which she did it was more astounding. She didn’t try to save him or fix him. She just let him be the version of himself that he was. She took him to the hospital. She made sure he was eating. She bought his cigarettes. She bought his tequila. She organized his medical documents. She did all the things that he would have done for himself had he been able too, and she did it under excruciating circumstances.

Even in the wreckage, there is light.

Two days before my dad was to go into surgery, he tested positive for Covid-19. Two days later, the day he was supposed to go to the hospital, he ran out of tequila. My mom rationalized that he would have been out of tequila anyways had he gone to the hospital. So, she allowed for his companion to remain absent. She called his doctor. And absent it has been for 2 weeks.

His steady beer buzz does not replace the full distorting effect that tequila did. He finds himself unwanting to speak to me. I assume because of his anger towards his cancer and somewhat because of the hostility towards himself. Tequila, his lifelong companion, betrayed him. Without its ever-presence, he can finally see the damage, but there is light even in the wreckage. He is not as keen to see it as I am, but its existence is undeniable.

For the first time in my dad’s life, he has a companion who is not trying to change him. Tomorrow is a scary day, but when it comes, we will approach it together with a collective knowing that the slightest bit of hope can make all the difference.