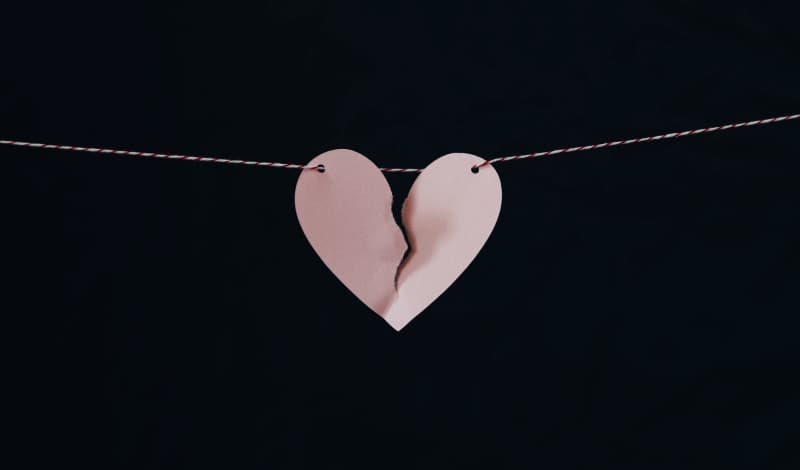 I’m not talking about why extracting yourself from a relationship you’ve both long outgrown and going on an Eat, Pray, Love style journey of self-discovery is awesome. I’m talking about why having your heart ripped out of your chest and stamped on is highly underrated.

Years ago a friend Rob told me that while having his heart broken was the worst experience of his life, he “wouldn’t have missed it for anything”. It made no sense to me at the time, and it certainly made no sense to me when I too was dumped by the love of my life.

My dumping took place in early December. We’d had a stressful weekend, and X had seemed a little distant. But it was a hectic time of year and only two days before a three-week holiday we had planned in New Zealand.

I definitely wasn’t expecting him to sit me down and tell me he wasn’t in love with me, and hadn’t been for more than a year.

Over the next few days we packed up our apartment, speaking only with polite formality, as we sifted through four years of entwined life. The long silences were punctuated with soft beeps as Google calendar updated me with relentless, tactless notifications of when our flight to Queenstown would leave, and where we would stay each night.

Facebook stepped in with a never-ending wave of ads for dating apps, relationship therapy, holidays for singles, weight loss, fertility treatment, and ‘life-coaching’ promising to reveal “the one mistake all women make”.

But even from the beginning there were perks.

Your friends and family show you how loved you are

There’s nothing like a break up to show who is really there for you for better or for worse.

My father finally learned how to send text messages and messaged to say, “You are my lovely daughter and I love you very much.” (This was no small achievement – his last attempted sms, years before, had ended enigmatically with “nun says hut gur”.)

When I told my friend Emma from high school that X said we had different values, and lamented that I didn’t understand what the differences even were, she clarified impatiently: “You value openness and honesty and he values BEING A DICK.”

My friend Lucie took me hiking with her for three days over New Year, even though I was, as expected, lousy company.

At Christmas my mum insisted I have at least three times my fair share of the pork crackling.

The sisterhood steps up

If, like me, you have no filter whatsoever and will tell anyone anything, you might be surprised at the support that’s out there.

The woman at the airport wine tasting stand when I flew back to Melbourne for Christmas with my parents – instead of to NZ – gave me generous tastings of the best wines, told me about troubles she had with her boyfriend, and sympathised with the awfulness of it all. “And then he moved to the Blue Mountains without you? After it was your idea in the first place? Scumbag!”

There’s always a funny side (no, really)

The juxtaposition of humour against tragedy amplifies the laughs. Ask anyone who writes black comedy. And don’t underestimate the power of a real belly laugh in those first dark days after a breakup.

My mother sagely assured me that my long deceased Nanna in heaven must have arranged the hailstorm that struck the day X moved out. “God was probably saying, ‘No Ellie, no you can’t have a thunderbolt… Ok, I’ll do you a storm… Yes, alright then, a hailstorm’.”

Mum then warned me not to stand to close to X if we ever met for any reason. “Just in case Nanna gets her thunderbolt, you better stay clear.”

My group of female rock climbing friends decided breakups were like falling on a climbing route. “Sure, you’re scared at first, but then you realise you’re fine… It’s just time to find a new route.”

You realise just how deep your reserves of inner strength run

Think of it like running a marathon or climbing a mountain – painful and awful and you’d give anything for it to be over while you’re in the thick of it. But once it’s done, you look back and say “Wow, I got through that. I can survive anything. I’m a goddamn warrior.”

When I sobbed over the phone to Emma, yet again, four weeks after the breakup and asked, dramatically, when the pain would end, she told me, “Two months. It takes two months, so you’re halfway there. You’ve got this.”

So I plodded through, trying to do the right things – seeing friends, staying active, talking to a counselor, focusing on life’s positives, limiting daytime drinking to ‘moderate’. And Emma was right – it did take about two months. Eventually I stopped waking up full of crushing dread, and instead up woke up looking forward to the day ahead.

Call me competitive, but I totally win at surviving breakups. You can too.

While you will undoubtedly have another chance at love, if that’s what you want, in the meantime enjoy the freedom and possibility.

More spare time, admittedly a mixed blessing, gives you the chance to spend more time with friends, and focus on new (or old) interests. Sounds cliché. Try it anyway. I discovered how much fun rock climbing with my female friends was, compared to always partnering with X.

You also get freedom from your exes annoying habits – no relationship is perfect, so you may as well enjoy no longer having to put up with snoring, smoking, whinging, boring sex, veganism, or inability to clean the bathroom. (Does that sound judgey and unfair? Of course it is! You’ve just been dumped – judge away and embrace it.)

You get to experience the joy of falling in love again

It may not seem possible in the beginning, but it absolutely is.

When Emma listened to me wail that I would never meet another man, she cut in, “Yeah, yeah, I know, no one will ever love you again, right? This is just a stage everyone goes through. It doesn’t last long. I promise.”

Turns out she was right about this too. I did meet another man – a brilliant, kind, eccentric, hilarious quantum physicist. I got to enjoy the early romance moments of being utterly besotted and blown away – butterflies in the stomach every time he texted, first kiss, first sleepover, first time to hear him say “I love you”.

I finally understood what Rob had been talking about all those years ago. The breakup was brutally painful. But the support and solidarity, the humour, seeing my own strengths, and the chance to build an incredible new future, was all utterly, utterly brilliant.