Get Daily Email
Join/Login CLOSE
Home / Featured Content / Why You Need to Shut Up, Listen, and Communicate Heroically 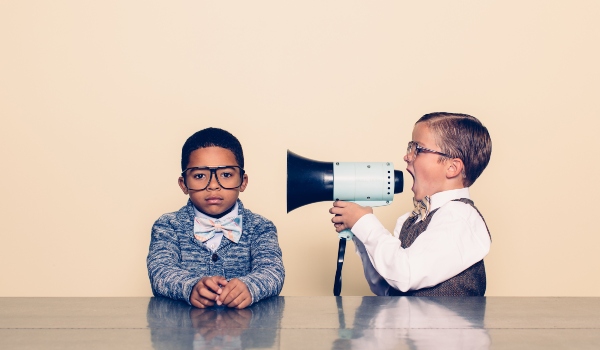 I did it. I argued with someone on the Internet.

It wasn’t the first time, and probably won’t be the last.

I know what you’re thinking: arguing on the Internet is the greatest exercise in futility since Sisyphus rolled his boulder.

We all know about the infamous echo chambers created by the greatest information sharing invention in human history, where confirmation bias can run rampant. It’s easier than ever to find information that backs up your beliefs.

Unfortunately, this has also made it easier to think that people with different opinions are idiots and unworthy of your respect. The Internet, once predicted to be the harbinger of a new age of human cooperation, is also the impetus for bitter division.

But it doesn’t have to be that way. We can still communicate in a civil, constructive manner. What we need to do is shut up and listen to each other again.

Agree to Disagree, But Don’t Label

Brick I don’t knowSo, someone disagreed with me.

They responded to my post about mass shootings, taking issue with the statement that “we are all responsible.” I replied in order to reinforce my point: if people in our society work together in the aftermath of mass shootings to promote hope and seek solutions instead of degenerating into cynicism, we might be able to reduce the occurrence of such events in the future.

Here’s the thing: I “argued” with this person, but not in the way you think. I didn’t attack them personally. I didn’t assume they were some demonic being that I needed to banish.

Rather, I did what we’re supposed to do in the grand tradition of civil discourse: I calmly replied in order to clarify what I had intended to say. I also suggested they may have missed the point of my post (if, in fact, they read it at all) and recommended they read it again if they wanted to discuss further.

I stood my ground, but in a way respectful of the other person. There’s no need to try and destroy someone else.

Was I a little angry that they jumped to a conclusion and missed the point? Sure, but that’s a natural reaction. But we can work to control our anger before we let it run through our fingers into the keyboard.

labelsSpecifically, I was angry because the person used the word “liberal.” Nothing bothers me more than labels. Labels are a boil on the backside of human existence. They’re arbitrary dividing lines between people that we often forget we’ve simply made up.

If I have to be labeled at all, I’m a humanist. I believe we need to drill down past all the stupid labels we put on ourselves and others in order to access the fundamental humanity we all share. This transcends politics, religion, and any other major affiliations.

All of the things we invent to categorize human beings are just ways to separate us into petty gangs. We need to remember it’s better to be part of the human tribe, instead. Gangs exist only to cause chaos. A tribe works together to benefit all.

In the end, we agreed to disagree, and that particular Internet-based conversation became quite cordial. I know, that’s like seeing a unicorn, right?

We both said “fair enough.” Sometimes, that’s as far as you’ll get. But in words like “agree to disagree” and “fair enough” are the ground rules for civil conversation, based on respect for our mutual humanity. We need more of that these days!

Yes, there is every possibility the other person will take advantage of your kindness and refuse to be civil in return. Yes, that sucks. But at least you made the attempt. And don’t forget you took the hero’s path. Heroes can take a licking and keep on kicking.

Don’t let them walk all over you, though. Extricate yourself from a lopsided conversation with someone who’s being narrow-minded, for sure. Don’t waste your time. You’re never going to change another person’s mindset directly. They need to do that themselves. You can only give them the suggestion of being more open-minded, and show them a better way by example.

Like I said, someone needs to be first. Someone needs to be the one to extend the olive branch. Be prepared for confusion and suspicion. Many people have forgotten what it’s like to have a calm conversation. You have to wait for their knee-jerk defensiveness to relax!

Keep trying to bridge divides, and you’ll be rewarded, maybe even surprised, by the people with which you’re trying to communicate.