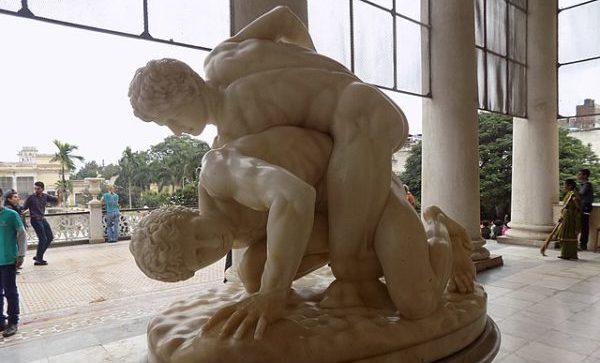 Years ago, as a young journalist in Washington, DC, I was assigned to attend a Senate hearing on foreign relations.  Upon entering an elevator reserved for Senators and their staff, which I was ushered into because the Capitol was under construction, I noticed the floor was covered with a bright blue mat.

As the doors were closing a man jumped on.  He carried a leather briefcase and resembled a corporate raider on his way to buy a company or unload vast amounts of stock.  I recognized him as Senator Joe Biden.

He looked at the blue mat and asked me as if I was responsible, “What the hell is going on?”

I replied, “The gym was closed so the Iowa contingent just had a wrestling meet in here.”

Biden immediately dropped his briefcase and contorted himself into a wrestler’s crouch, hands in front ready to strike.  His eyes widened and he said, “Well, let’s go then.”

My reflexive obeyance to authority kicked in.  I dropped my briefcase and mirrored his same stance.

Like Hamilton and Burr on the shores of Weehawken, we stared at each other and waited for the other to make the first move.  He was the Senator.  It was his to make.  He faked high with his left hand, a jab to set up his right hand, which he used to “shoot the leg.”  But he pulled back and just slapped my leg as if he were a Mama dog toying with her pups, a hard nip to keep them in line.

As the elevator stopped, he placed me in a headlock and grabbed his briefcase.  I squirmed enough to grab mine.  We exited the elevator with me bent at a 90-degree angle, staring at the ground while he was erupting in laughter yelling at bystanders, “Look what I got.  This young man tried to wrestle me.  I still got it!”

He walked me into the Senate hearing room as if I was a prized animal he had just bagged on the Serengeti.  When a Capitol Policeman delicately separated us, Biden tossed me into the wild.  “Now that was fun!” he said while patting me on the back.

Admonished by my editors for wrestling a Senator rather than posing a question while trapped in an elevator, I recognized that I had little future in investigative journalism and applied to law school the next year.

My 48-year old self is more cynical and growing more so every day.  I look at the world more cautiously and with scars from a career where the person on the other side doesn’t nip you in the leg, she or he bites hard and takes you down if you flinch.  You must learn to get back up.

Joe Biden knows that.  I thought of the Vice President when his son, Beau, died 5 years ago.  I pondered how many times he must have wrestled with Beau, only three years older than me, while raising him after his wife and daughter died in a car accident in 1972.  I read that after the loss he was going to quit politics to raise his sons.  But he re-entered the ring.  Biden realized he had to get back up.

Today, had the scenario replayed, suspicion and maturity would rule and our encounter would be far different.  There would be no playful wrestling match.  I would be armed with questions, which I would ask.  The content of my coverage of the hearing would be more substantive.  It would have an angle, a spin, or at least that would be the perception.  Now more than ever, when clicks are a more vital barometer than truth, stories need a hero and a villain.  “What’s this guy’s take?” readers now ask, always searching for good versus evil.

Liberal?  Trump supporter?  Is he for Biden or against him?

In choosing sides, we fail to see each other for who we are and the stories that make us whole.  We only see what we want to see or are conditioned to see.  It becomes reflexive.  We see a reporter and a politician, wearing their perceived biases and labels for the world to judge.

In truth, there is more.  There’s an anxious youth looking for lessons on how to survive in a challenging world to come, and a father seeking solace in the embrace or grip of a son and daughter he has lost and now misses.  When he lets go, if we so choose, we recognize that we all need to get back up again.  It’s the only way to survive.

Christopher Parent is a writer and intellectual property attorney
currently living in Zurich, Switzerland with his wife and two daughters.
Chris was a journalist and speechwriter before entering the field of law. He moved to Zurich after practicing law in New York, Denver and Seattle. He has published academic pieces in journals sponsored by the University of Virginia, Fordham University, the University of Notre Dame, Tulane University, and The George Washington University. He recently published two short humor pieces in Points in Case and Public House Magazine as well as a creative nonfiction essay in Memoirist. These works can be found on chrisparent.net

Facebook94Tweet1PinEmailShares95
wpDiscuz
0
0
Would love your thoughts, please comment.x
()
x
| Reply
Share this ArticleLike this article? Email it to a friend!
Email sent!