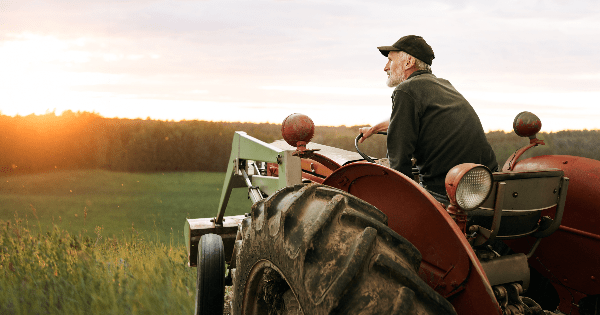 For L.F. on her birthday

When our first son was born, we lived across the road from a field that was farmed by a father and his son. These dairy farmers were faithful members of the church where I served as pastor. That first spring, they planted soybeans. In the summer sun, the plants shined as brilliant green but, by the beginning of fall, the leaves had started to brown. I expressed my concern to the older farmer, wondering if the soybeans were suffering from a lack of water. He shook his head and explained: “The leaves turn to goldening before they turn loose.”

In the coming weeks, the field did indeed transform into a sea of gold. One crisp morning I stepped onto the porch with my coffee and saw that the leaves had dropped to the ground just like my friend had assured me. Newly exposed bean pods rattled in the cold wind.

That very afternoon two John Deeres came over the ridge in a commotion of noise and smoke. Watching from our porch, my one-year-old was entranced. The farmer had once told me that his son had rode beside him in the tractor’s cab when he was that age. But after my son eased down the porch steps, he reached up for me with both hands. I was happy to hold my boy on the other side of the road as that team of father and son harvested the field.

The following spring the farmers planted corn. My wife and I asked the younger farmer and his wife to be the godparents of our son. My own father gave the sacrament of baptism in the little country church.

We had good rains and the stalks shot up in neat rows like obedient soldiers standing at attention. During a midsummer’s drought, their leaves spiraled so that they resembled the green spikes of a pineapple. This time the older farmer was concerned. I prayed for an end to the dry spell but obviously deserved none of the credit when the rains finally returned. I was just thankful that the leaves had unfolded and the stalks continue to rise toward the heavens.

By early fall the corn had sprouted spindly fibers from the top like tuffs of braided hair. I learned this was called tasseling. I asked the farmer’s son, as he was looking over the corn one afternoon, if it was time for the harvest. He told me they waited for the stalks to brown and dry so there would be less chance of jamming the combine. I ventured, “You wait for the corn to turn to goldening.” He chuckled, “And you’ve been listening to my dad.”

My wife and I have moved away from that house across the road from the field and those dairy farmers, our dear friends. We now live much closer to the beach and steal a few days on the coast during different seasons of the year. Looking over the ocean, the cycle of nature is not nearly as apparent as surveying a crop. There are changes in temperature, but the sea is steadfast, ebbing and flowing. And on any clear evening, the light is golden.

My wife refers to “the golden hour” as those last sixty minutes or so on the beach before sunset. After supper she would hurry my son and me from the house to the shore and take action pictures of us digging in the sand or scurrying away from the surf, hand in hand. The light was amazing. After putting our boy to bed, she’d put her feet up and scroll through her phone, perusing that evening’s pictures with a glass of wine in her other hand.

While savoring my own drink, I have sat beside her as the years have passed and the times have changed. Over the course of our marriage, we’ve moved four times, had three children, and I’ve served two churches. Our firstborn is now in school. Our youngest’s hair is as fine and blond as corn silk—like her mother’s hair at the same age. I’ve seen the old photographs. Now I watch my beloved resting on the couch in the soft lamplight. Her hair has darkened. Has turned to goldening.

“That’s a track-tor,” my two-year-old firstborn declared. I explained that, according to his godfather, that machine mowing through the corn was actually called a combine. His slow nod indicated that he heard me. Still, he didn’t pull his gaze away from the action in the field before us.

Having reached the end of a row, the farmer’s son brought the great mechanical beast to a shuddering halt and motioned us across the road. When we came within shouting distance, he called out, “Does he want a ride?”

I hoisted my wide-eyed boy into the strong arms of his godfather. Alone, I watched them drive into the setting sun. A perfect picture.

A few days later I made sure to tell my other friend, the father, about this ride. He said that I’ll wake up one morning and my son will be driving his own tractor. I agreed that they sure do grow up fast. Times change, I commiserated, expecting a replay of the conversation I’d already had dozens of times with different people living in that agricultural community. But this time was different. The farmer’s tanned face lit up with a bright smile: “Times change, but I’m still as handsome as ever!”

END_OF_DOCUMENT_TOKEN_TO_BE_REPLACED

Facebook62TweetPinEmailShares62
wpDiscuz
Share this ArticleLike this article? Email it to a friend!
Email sent!