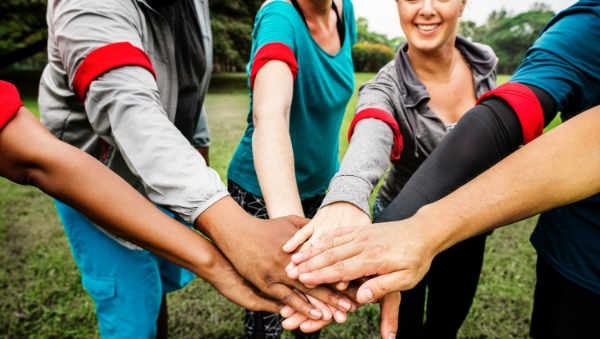 In the wake of the 2018 midterm elections, after months of political advertisements, enduring slander the likes of which we’ve never seen—let me offer a hopeful plea for unity:

We’re all on the same team.

And it’s the fourth quarter. It might even be overtime. Either way, the game is on the line, and if we can come together now, there’s still a chance we can keep moving the ball forward.

Let’s talk a little history first, and then we’ll get to football.

There’s this thing called The First Amendment. It guarantees all citizens the right to free speech. It protects the presses. It’s the reason I’m able to write whatever I want in my weekly column.

Remember when I imagined Trump as a high school football coach?

Free speech is the reason I was able to do that.

In response to that column, many of my readers reached out online and made their disgruntled voices heard (a few more livid readers stormed The Courier’s offices and ended their subscriptions).

And guess what? That’s okay.

Those readers were exercising their own freedoms. And that’s what makes America great (no, sadly, a trucker hat with a slogan stamped across the front isn’t the key to our country’s future success). To be clear, it’s okay to have opposing views with your neighbors, but don’t forget they’re still your neighbors.

Let me describe a place where differences are put aside in pursuit of a higher goal:

The gridiron is a cross-section of our country: black, white, rich, poor, Christians, atheists, heterosexuals, homosexuals. On the field, teammates fight for the same goal and try to move the ball forward, one yard at a time.

And it’s not just football.

Throughout my life, sports have allowed me to meet people I would’ve never met otherwise. Whether I was playing AAU basketball with boys from different parts of the state, or traveling to Sweden after college to encounter an entirely new culture — sports have served as a bridge to new perspectives in my world.

As a coach, I’ll never forget the times I had to pick my players up at their homes. I soon realized the ones who needed rides also needed a whole lot more. I bore witness to trailers on cinderblocks with busted-out windows, a one-bedroom apartment with a bed sheet hung from the ceiling—home to a family of seven. I saw clearly how different their lives were from mine.

The way it works in the heat of the battle, your value is determined by your contribution to the team. This leaves no room for political correctness. There are no labels like black or white, no references to political, religious, or sexual preferences. Even positions titles like “quarterback” or “linebacker” lose their importance within the structure of a true team. The hardest workers, the ones that contribute the most, be it during practice or in the fourth quarter of a game — those are the ones whose voices are heard.

In a democracy, though, all citizens are given a chance to vote. Whether you took advantage of that freedom last week was up to you. But now the results are in, my fellow Americans, and you might not like them — or you might love them — either way, remember, we’re all on the same team, and what we do next will determine our future.

Photo by rawpixel on Unsplash