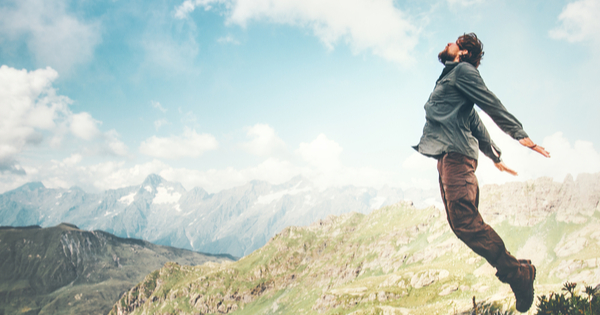 I’ve always been an old soul. Even growing up, I felt like “Yeah, I’ve been there before.”

Even my old pastor at my old church in Tuscaloosa said something to me when I was like ten years old to this effect:

“Look at young Mr. Hall here. He’s lived enough lifetimes for any three of us.”

But only until recently have I felt free enough to put my own soul on loudspeaker. This has cost me relationships many times.

I was always scared that I’d be made fun of when I put my soul on loudspeaker. “Why are you so sensitive? You some kinda f***** or something?” Kids can be little…well…they can be little holes. You know?

When I was 22, I was probably at the peak of my radio career. I was working with a radio legend in the state of Alabama – former Voice of the Alabama Crimson Tide Doug Layton. I thought I was on top of the world.

But even then, I knew without a doubt that I’d be made fun of if I ever – and I do mean ever – put my soul on loudspeaker the way it needed to be.

And while I never came up positive, I was tested for autism several times. I was the ultimate late bloomer.

This is why what I saw on America’s Got Talent was just so very special to me.

Yeah, I’m about to shoutout a reality TV show. I didn’t watch when it happened, but I’ve seen the video many times now.

And it was a lesson on just how important putting your soul on loudspeaker is – despite any obstacles you may have in your way.

I give you the story of 22-year old Kodi Lee.

Blind and autistic, young Kodi struggled to find his place in the world. But with a supportive family and prodigious talent, he’s gone viral in a really beautiful way.

Kodi’s believed to be one of 25 people in the world with the gift of perfect pitch and audio photographic memory. The latter meaning that he’s got the ability to recall a song he hears after only one listen.

He and his mother Tina stepped on the AGT stage and after a brief introduction, he said he was going to perform the R&B classic A Song for You on the piano.

This is no small feat. To my ears and my soul, that’s only the finest love song ever written. “I love you in a place where there’s no space or time. I love you for my life, you’re a friend of mine.” C’mon man!  Leon Russell’s pen and original voice created gold, but Donny Hathaway’s legendary voice made that song the very definition of magic.

Kodi sat down at the piano. With support and a cane, it reminded me of a young Stevie Wonder.

Mom kneeled down and gave her son a last-minute pep talk (which is beautiful in and of itself.) Kodi takes a moment to seemingly ground himself. He puts his hands at the piano…and y’all…Y’ALL!

I listen to a lot of music. It’s rare that a song on a reality TV show will hit me as hard as this one did. But oh…my…God!

My Southern is showing…

The most telling shot of the whole video was when Kodi sang his first note. The video cut to a shot of Simon Cowell…yeah, THAT Simon Cowell. And he had the ultimate “holy s***” look on his face!

Following Kodi’s amazing performance, the crowd in the theatre and all four judges leap to a standing ovation.

Judge Gabrielle Union gave him the “golden buzzer” which means he’s automatically going to the final episode. And she said to him backstage “You just changed the world.”

He’s got a voice that reminds me a little of Ron Isley – especially how comfortable Kodi is with falsetto. His piano skills were very Hathaway-like.

But even my music nerd-dom can’t explain why this performance hit me so hard.

In this all-too-short performance, I truly believe that Kodi did more to take down the stigma of autism than anything I’ve seen in many years.

So often, special needs kids get shuffled into the system and they don’t get the treatment and the education they really need. They won’t have the same opportunities that most kids have. Special needs kids aren’t rejects. They’re kids with potential and talent and massive hearts!

Kodi’s talent and his huge heart are exactly why educators like my late Mom put so much time and attention and so much of their heart into seeing that special needs kids get the attention they need.

As a pure music fan, that was one of the most beautiful things I’ve ever seen.

As a fan of the human race in all her forms, that was one of the most beautiful things I’ve ever seen.

Be ye Ryan Hall or Kodi Lee or one of the millions this website can reach, put your soul on loudspeaker. The world needs it.

One soul on loudspeaker can change the world.

And Kodi Lee’s soul changed mine.