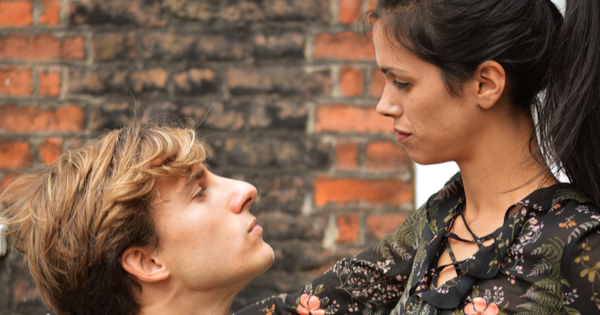 There’s a distinct chance this article may be a total stretch. It’s a chance I’m willing to take because I believe there’s some gold in them ‘thar hills.

This is one of the oldest hack clichés amongst life coaches and therapists. But it’s oh so very true.

To find love with others, you must learn to love yourself.

But better yet, you must learn to accept yourself.

So, what I’m going to try to do with this article is connect a viral video from a bagel shop in New York, with the wedding of a really good friend of mine this past weekend up near Cape Cod.

I mean, I’ve been racking my brain trying to figure out what I wanted to write about with the wedding, but I’ve been swinging and missing.

That is, until that video went viral.

If you haven’t seen the video, I encourage you to go and watch it. In this video – let’s call him a vertically challenged man – had taken offense to a perceived slight from one of the employees and some of the customers at this bagel shop about his height. The angry man started yelling and threatening other customers in this store before one of them tackled him to the ground.

A lot of people online have been having some fun with this video. And I get it, it’s a classic viral video of someone acting out and getting taken to task for it.

But I see it as a bigger statement of how human beings see each other.

My dear friend and life coaching colleague Alex met his new bride Arielle a couple of years ago and I knew from the beginning that they were a special pairing. I don’t know her well, but I do know him pretty well.

When you find that special someone, it isn’t magic. It may feel like magic. But it’s not magic.

It’s usually the result of a ton of hard work and deep introspection.

And I believe that Alex being able to find and create the caliber of relationship he has with Arielle is a testament to the work he’s done on some of his warts and his faults. Again, while I don’t know Arielle well, I assert she’s done a ton of work on her Self as well.

You have to do the work to be able to create the caliber of relationship that these people have.

Back to the viral video:

The man in the video became triggered because he felt slighted after some jokes and comments about his height. And that women reject him because of his height.

You don’t get women messaging you from online dating sites. You don’t have people in your life who you can trust and love.

What you get is tackled in a Long Island bagel shop. A video of which goes viral and you become the poster child of men who feel like the world owes them.

On a bigger level, I’m actually grateful this video has gone viral. And here’s why.

Here was a man who grew up struggling with his weight. Being bullied and ridiculed because he was overweight.

Alex didn’t get angry in a bagel shop. He got to work on himself and he managed to create the relationship of his dreams.

I’ve recently redoubled my own work on my self and my relationships. And even I – who has been single since Barack Obama had dark hair – am starting to see some glimpses of who I can be in a relationship.

I’ve shared with you about the woman I met at the networking event a few months ago. I don’t know if I’d have met her if I hadn’t been taking on this work in my own life.

This has meant that I’ve had to look at some of the darkest days and events of my life. I had to do some deep forgiveness work.

I’ve been working on some deep forgiveness stuff lately. I mean, have you seen my last article? To forgive something that happened in my life when I was 16 is pretty deep and heavy.

Look, none of us want to do this work. To look at some of the deepest chasms and recesses of your soul isn’t fun. It’s grueling and grinding work.

But it is absolutely necessary to creating what you want to create in your relationships.

Back to the bagel shop:

I don’t know the man’s name. I don’t know what kind of background he has. But I can guarantee you there’s something here.

I know I’ll never be 6-5 myself. But I know what I bring to a relationship with a woman.

And real talk here, men…just because you aren’t 6-5, doesn’t mean you aren’t lovable. Nick Saban – University of Alabama head football coach – has been married for 40 something years and he may be 5-6. Terry Saban saw something in him outside of his height.

Danny DeVito is maybe 5-0 if that, and he’s been married to Rhea Pearlman for 900 years.

My point is this: it ain’t your height, bro. It’s your self-hatred. Learn to love yourself and magic will happen.

Facebook43TweetPinEmailShares43
wpDiscuz
0
0
Would love your thoughts, please comment.x
()
x
| Reply
Share this ArticleLike this article? Email it to a friend!
Email sent!