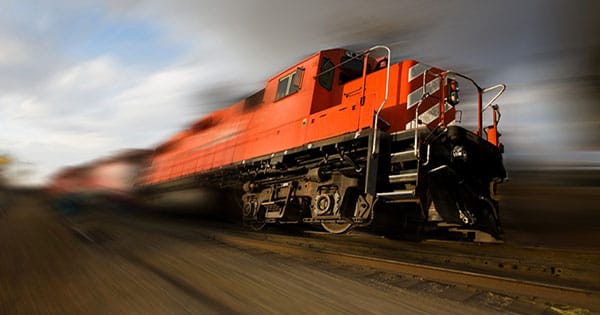 You’ve heard about the research pertaining to men taking more physical risks than women, right? Let’s face it, guys, we’ve all felt the crush of peer pressure from our fellow men at some point. That burden of in-group conformity can be intimidating. This is especially true when one is a young man, and particularly a young man with a low popularity score in the unforgiving and cruelly Darwinian social hierarchy of school.

Yes, like most men, I have engaged in risky behavior to impress my friends, or just to fit in. There’s also, as suggested by the research, the siren call toward risky behavior generated by testosterone. I’m reminded of one clear episode from my youth that involved a freight train.

One of my acquaintances during my early teens was an eternally angry guy I’ll call Mark. He was so antisocial that when I introduced him to new people, I should have said “Hi, this is Mark. He doesn’t like you.”

Mark fancied himself a rule breaker and a thrill seeker. Therefore, it wasn’t surprising when, during one late-night gathering of friends, he looked around the group with a wicked grin and said, “Let’s go jump on the train.”

Mark was referring to one of the freight trains that would periodically rumble through our town in the middle of the night. You could hear the mournful wail of their whistles as they barreled through the dark, moaning and clanking like lonely and monstrous ghosts.

Marks’ ingenious plan involved what would normally be considered two routine human abilities: running and jumping. But I was no ordinary human. I was much, much worse. To say I was “a little out of shape” would be like saying Donald Trump’s hair is “a little strange.”

Let me put it this way: do you remember the TV show the Six Million Dollar Man, featuring the guy the government rebuilt to be better, stronger, faster? Well, I was the “six million donut kid,” built by junk food to be weaker, slower, and sweatier. Some people train for triathlons. I guess I was training for a “die-athlon.” As in getting closer to death one Happy Meal at a time.

To be kind to my young self in retrospect, I was doing a lot of “eating my feelings,” thanks to some insidious Adverse Childhood Experiences I’d accumulated. While my siblings were coping with drugs and other negative behaviors, I was coping with food.

Besides my lack of athletic ability and my weight, there was the small matter of being scared out of my mind. I imagined jumping toward a moving train and missing, falling under it and getting my legs chopped off. Then, there were local legends of the horrible train conductors who were basically ogres out of the most messed up of Grimm’s fairy tales. Rumor had it they were mean and hulking figures who would beat you to a pulp for jumping onto their trains.

No amount of protesting on my part would sway my compatriots. They mocked, and teased, and belittled me into submission, and we ventured out into the muggy summer night.

I soon found myself squatting in bug-infested bushes at 2 AM next to the train tracks that cut through the middle of town. I was sweating from the warmth of the air and the fat pushing against my internal organs. Finally, there came the distant clanging of a train, and the eerie “wooo wooo” of its whistle. As the train came closer and closer, I got sweatier and sweatier.

Then, the massive rumbling mass of pitch-black steel was passing us with a deafening roar. Crazy Mark gave the order to run. I lurched to a start, stumbling and puffing with effort as I ran almost as fast as I could. Almost is the important word there. To say that I was reluctant to catch the night train would be like saying guys are reluctant to go to the proctologist.

I felt like I was running in slow motion, like in that famous scene from Chariots of Fire. But then again, that’s the speed I ran at all the time. Alas, my girth and my fear conspired against me, and I found myself losing ground as the train lumbered out of my reach. The rest of my friends caught up to it and climbed aboard the caboose. I heard them whooping and hollering and calling my name as the great metal beast carried them into the darkness.

Relieved and ashamed, I wandered back to Mark’s house. I sat on the steps waiting for my victorious pals. Eventually, they appeared on the street, still celebrating their accomplishment. When they spotted me, they laughed and began to sing a taunting refrain:

Ultimately, the dumb decision wasn’t the attempt to jump on the train. The dumb decision was feeling like I had to go along with the idea in the first place. In the days that followed that night, I realized peer pressure is probably one of the stupidest human motivations.

My friends taunted me for years after we chased the night train. But it wasn’t long before their teasing didn’t bother me, because in the end I moved on to the conviction that I don’t have to threaten my life and limbs for the sake of fitting in. Being fat and slow just happened to help me stick to that conviction! But like they say, a win is a win!

Note: Someone commented on a Facebook share of this article to say that not all risks are negative. Yes, indeed, there is a difference between “positive” and “negative” risk. I think the distinction is clear: jumping on a moving train? Negative risk. Trying to introduce a new concept to a stagnant industry, or start a business, or ask a girl on a date, or challenge another team at a sporting event in which loss is a reality, etc? Positive risk. Risk that involves catastrophic injury to body/mind is a negative risk, in my book. You don’t need to “prove your… Read more »

Facebook16TweetPinEmailShares16
wpDiscuz
1
0
Would love your thoughts, please comment.x
()
x
| Reply
Share this ArticleLike this article? Email it to a friend!
Email sent!