Get Daily Email
Join/Login CLOSE
Home / Advice & Confessions / What Does Pride Mean for Me? 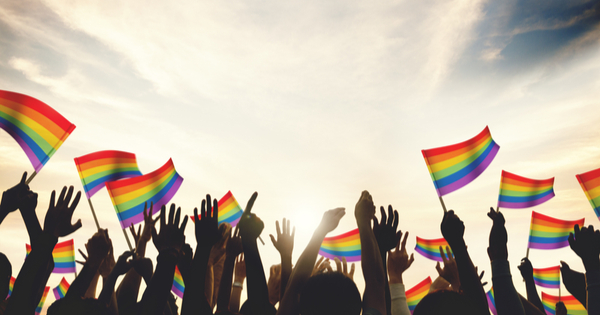 “Love is what we are born with. Fear is what we learn. The spiritual journey is the unlearning of fear and prejudices and the acceptance of love back in our hearts. Love is the essential reality and our purpose on earth.” – Marianne Williamson

At work this past weekend, I met a young man who absolutely broke my heart. And it also got me present to just what Pride really means for me.

I work for Dyson out of a Bed, Bath, and Beyond on the weekends. I am a Dyson brand ambassador. This is my fancy way of saying that I sell vacuums and air purifiers. I enjoy my job for the most part because I get to talk with some really fascinating people on a daily basis.

My new friend was one of those people.

This young man was a vendor for a different product sold in the store. At first blush, his presence is what I’d call curious.

He’s a tall, slender young man who was dressed with purpose. While I wouldn’t quite call him a cross-dresser, there was a definite feminine influence in his dress.

Evan was his name (no it wasn’t, but I don’t want to put his name on loudspeaker.) He’s a bright and outgoing young man. He’s a recent college graduate who is looking for a job in his chosen field of music production and performance.

And while he didn’t exactly say “Ryan, I’m gay,” he didn’t hide it either.

Between vacuum demos, I started talking to him about being from Alabama and how hot it’s been back home.

While Evan and I were talking, a couple comes up and I answered a few questions about our products to them. Evan’s setup was in the back of the store, and I’m toward the front. He stayed around me while I was speaking to this couple. I believe he needed the connection.

After the customers left, Evan and I continued our conversation about Alabama. And during this time, he says something to me that absolutely shattered my heart.

Now, I don’t know if he’s actually fearful for his life, or he’s speaking metaphorically. But it’s a disturbing statement regardless.

I recently read a Buzzfeed article about a guy in Pittsburgh named Howie Dittman. He heard that a female friend was headed to the Pittsburgh Pride parade with an organization called “Free Mom Hugs” – a group that assists the LGBT community – and Howie wanted to participate. He bought a shirt that read “Free Dad Hugs” and went to the parade.

He was surprised and shocked at the effect that his attendance at the parade had. Not just to the Pride attendees, but to himself. He had many tearful hugs from men and women abandoned by their parents after they came out to them.

And a photo has gone viral on social media from a man from Oklahoma named Cody Barlow. The picture is the tailgate of his 1991 Chevrolet Silverado with the Pride flag draped across it in rainbow duct tape. With the inscription of “Not all country boys are bigots. Happy Pride month.”

As a straight, Southern man – and as a man who can’t get Evan’s statement (and Evan for that matter) out of his head – I started thinking: What does Pride mean to me?

As anybody growing up, I’ve had my share of regretful homophobic thoughts and ideas. It’s silly to think I could’ve ever been this way, but here I am.

Like the time I was in the gym locker room and I saw someone going over his bodybuilding posing routine with a couple of friends coaching him. And one guy says, “It’s beautiful the way your hams flow right into your glutes.” And I thought that was the gayest thing I’d ever heard at the time.

Keep in mind, I’m the guy who most every Monday night is parked in front of my TV watching WWE Monday Night Raw…so…

Anyway, I knew a lot of gay people growing up. My late uncle Eddie – my mom’s brother – was gay. And when my mom told me, I was hardly surprised. I was into my teens at the time she told me, but I wasn’t surprised.

Eddie was also friends with this couple named Tommy and David. I THINK Eddie dated David once upon a time, but I’m not sure.

I never knew them as gay or whatever my 12-year-old eyes saw them as. I just saw them as those really funny friends of the Ivey kids.

Side note: I believe they’re still together close to 40 years later.

Even then, I still don’t think I could understand what Pride means.

It wasn’t until I was in college in the late 90s that I finally got it.

In 1998, a young gay man named Matthew Shepard was abducted in Colorado and beaten to death. Many classmates of mine took up the activism cause for Matt after his death.

While I didn’t get involved – truthfully, I didn’t understand it – it made me present to something.

People hate what they can’t understand. And I began to understand some of the fears LGBT people face.

Let me put my life coach hat back on and pivot back to Evan.

From his presence, all the way down to the way he dressed, I could tell he was scared to death. Even some of the things he said to me during our conversation led me to this conclusion.

I don’t think he understands who he is. And Evan, if you’re reading this, I’d love to offer you a complimentary life coaching session. You are a King; you can’t see it yet.

Back to the point of this column. Here’s what Pride means to me.

While I will never know the fear and anxiety of being a black man pulled over by the police, I can understand.

While I will never know the fear and anxiety of a woman considering an abortion, I can understand.

And while I will never know the fear and anxiety of being gay and worried if people will accept me, I can understand.

To sum up, Pride is about more than parades and rainbow flags.

In the words of the late Oscar Watts – my favorite teacher of all time – “Be ye man, woman, chicken, or child, we’re all the same.”

Love is love, y’all. And don’t we all need a little more love in the world?

END_OF_DOCUMENT_TOKEN_TO_BE_REPLACED

Facebook96TweetPinEmailShares96
wpDiscuz
Share this ArticleLike this article? Email it to a friend!
Email sent!