Get Daily Email
Join/Login CLOSE
Home / Advice & Confessions / Men, When Did You Stop? 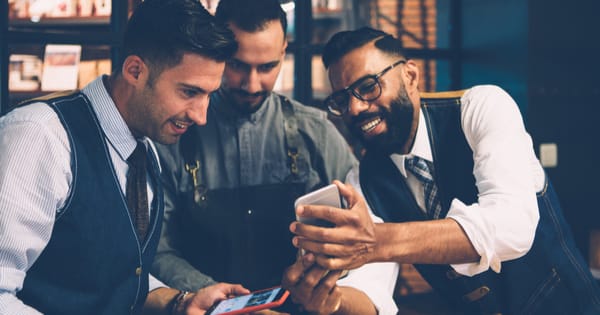 Maybe you are a better man than I, and you never did.

Maybe you stopped with your first long-term girlfriend.

Maybe you stopped when you started hanging out with guys who didn’t.

Or when you got engaged or married.

Or when your daughter was born.

Or, like many rich and powerful men, maybe you still do. Maybe you even brag about it to other guys. Maybe you dream of being a CEO, or the president, and you think it’s a prerequisite for the job.

Or, just maybe, you stopped when somebody called you on it. When the shame and indignity were turned back on you. When you lost a friend or a job and you had to confront it.

It’s not easy to stop, because that’s what it means to be “a man.”

A man is in charge, he sizes up and selects, he grasps, he takes what he wants, he makes his own way, he arranges things and people for his own pleasure.

“She likes it,” he insists, projecting his own need for touch and attention onto any desirable female within reach.

“They like it,” he concludes, basking in the acclaim of the “men” around him who weren’t “man” enough to risk it.

“I like it,” he decides, safe in a culture where girls and women are objects, products, where boys and men are consumers.

Until one day, I stopped. The particular day is not important. It was somewhere toward the end of my teenage years, sometime at college, I guess. I had a healthy circle of friends, of both genders. I was growing up.

But now—in these days of powerful men saying “I don’t exactly remember” and “It was a joke” and “It was a long time ago” and “I didn’t do it”—I can’t help feeling, ever so slightly, that I dodged a bullet.

Because I used to do it. Casually. Regularly. Instinctively…compulsively, you could even say.

Come on, guys, you know what I mean. Ranking girls by the size of their breasts. Pulling bra straps. Positioning yourself in class so that you get a certain view. Shrewd “man” that I was, I even sold a Sports Illustrated swimsuit edition to another “man” on the school bus. $2.50, more than two weeks’ allowance, got me a few packs of baseball cards.

But as you get older, as you rise higher, you take greater risks, you grab for more.

One day, in junior high, it was a few minutes before the last bell. We were in Home Ec, hormones rampaging as we waited to go home, or to basketball practice, or to the bakery. A group of guys was at the front left corner of the room, lounging in and around the desks. I was on the fringes, as usual.

She was in front of us, leaning forward, in stonewashed jeans, almost more white than blue, the style of those days. Tight jeans.

The guys may have been egging each other on, or maybe I just did it. My hand reached out and squeezed.

She yelped, turned around, looked for the culprit. The other guys pointed at me, but she didn’t believe them. It couldn’t have been me, shy and geeky and unpopular as I was.

And so I got away with it.

Just a junior-high stunt, you say. But when does a “man” stop? When does he grow out of this? Looking at our culture, it’s clear that most haven’t.

I may not have touched any more girls like that, but even after high-school graduation, I hadn’t grown up.

We were in a hotel room in Chicago, the long-awaited music trip. It was a paradise for kids from rural Iowa. I’m surprised anyone wanted to chaperone, and those who did probably regretted volunteering.

A few of us senior guys, fresh off graduation, were playing cards. Some girls were watching. I had become slightly less geeky—I now wore contacts and I’d had a date to prom. Confidence and adrenaline led to arrogance, and I invited one of the freshman girls to sit on my lap.

I didn’t force her, sure, but I know I asked more than once. And in that room, with those people watching, with my seniority, why would she risk saying no?

So she agreed. I knew it was wrong, and I’ve regretted it ever since.

It lasted only a few minutes. Maybe nobody else really noticed. Maybe she wasn’t really ashamed and doesn’t actually remember.

Anyhow, soon after that, I stopped. Which is fortunate, because you can probably be forgiven for minor indiscretions before you turn 18. But read the headlines, listen in the locker room, look around the bar—it’s pretty obvious that plenty of “men” don’t stop until they’re caught, exposed, shamed.

Men, you remember, I know you do. It was funny, yes, but only to you. It was yesterday, or long ago, sure, but it doesn’t go away.

If you don’t anymore, good on you. Tell some friends your story, and ask them, “When did you stop?”

If you still do, stop. Please. Just stop.

I'm from small-town Iowa but I live in a big city overseas. I've been married for 16 years and we have two children. I teach English as a job but would rather spend my time reading, playing sports or traveling.

Facebook15TweetPin2EmailShares17
wpDiscuz
Share this ArticleLike this article? Email it to a friend!
Email sent!