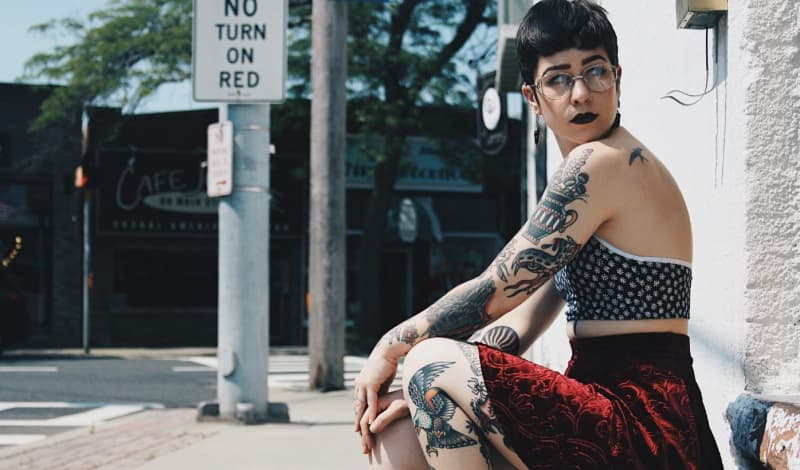 As luck would have it, the owner of a condo I was renting decided to sell. I wasn’t interested in buying and suddenly had to find a new place to live. On short notice, the nicest place I discovered in my price range was on the other side of town.

I went to check out the spot. Unfamiliar with this area, it wasn’t until I got close to it that I realized I’d been in this neighborhood before. The guy with whom I’d recently ended a romantic relationship lived nearby.

He and I didn’t have an ugly split, but that didn’t make it any less hurtful.

The separation was abrupt and thoughtless. It caught me off guard. Though, is anyone ever on guard for a union that seems to be going great to take an unexplained downturn?

I’d waited what felt like an eternity for someone like him to enter my life. Someone considerate and kind who loved music just as much as I did and was capable of offering overt, sustained attentiveness. He checked every box on my mental list of desired partner attributes, even the more superficial ones like “tall.”

I couldn’t have drawn him up any better.

Initially, things felt a bit awkward. We’re both introverts who wouldn’t boast vulnerability as a strong suit. But we warmed up to one another, and interactions flowed more effortlessly.

Because of our similar personalities, we both understood the other’s need for healthy space. No one took it as a slight when someone wanted to spend the night writing, in my case, or creating music and painting in his.

We spent inordinate amounts of time together, regularly creating new shared experiences. Everything was effortless — until it wasn’t. Our unofficial relationship went from 100 to 0. There was no time to mourn or deliberate. One day, it was just over. We returned from a road trip and never saw each other again.

Part of me thinks taking that trip was obligatory.

We’d both committed to it, and concert tickets were purchased. So, we just went. We fulfilled an agreement. But deep down where intuition resides, I could feel something was off between us. I wish I could provide a definitive answer to what happened. I wish I had one.

I wasn’t angry with him when things came to an apparent end, but I was exasperated. My communication efforts were fruitless. However, I was angry at what I allowed him to do to me, reducing me from a woman of substance to this — a sobbing, Instagram stalking, make-believe scenario conjuring, self-questioning, over-analyzing version of myself that I’d never met.

The situation wasn’t messy, but it also wasn’t productive.

I didn’t need anything making it harder to let go than it had already been. Then, here comes this reluctant move boasting the uncanny location of the only place I could find that was available immediately and comparable to where I currently resided.

After driving and looking around a bit, I determined just how nearby his home my potential new place of residence was — it was the very next street over. Potentially having only one row of houses between us left me mortified. I mulled over the decision for days but couldn’t wait too long. I’d miss out on this property while already up against the clock.

So many thoughts I considered.

My pride came into play. I didn’t want him to think I tried to move closer intentionally or was being creepy and refusing to walk away. I couldn’t allow him to believe I was any variation of desperate. Moving into the neighborhood was one thing. But the very next street? In the 135.9 mi² city that is Las Vegas?

In the end, my options were to take a less pleasant, more expensive (possibly both) place elsewhere, or take the condo within my budget that had everything I wanted but was eerily close to my ex-everything. Neither was ideal. I chose the latter because it was the most practical decision, and crossed my fingers that nothing I feared would come to pass.

I enjoyed the quaint up-and-coming community. Most of the time, I thought nothing of the fact that this guy was at most a block outside my window — except for when I left home. That part was psychological torture I hadn’t foreseen.

For the longest time, I half worried/half hoped I’d bump into him at the grocery store. Every trip to the gas station on the corner, the park, CVS, Starbucks, the carwash, nearby restaurants, or even just driving down the street made me anxious with possibility.

I spent every drive through the neighborhood peeking in my rear-view mirror, scanning every car that passed for his. My heart raced when similar vehicles approached, which happened often.

I imagined what I might say if we crossed paths while running errands.

My canned responses toggled between a nonchalant “hey,” a dramatic hug, affectionate small talk, or completely ignoring him. I had to get it right and ensure that I didn’t appear sad, even if I was, or as though I cared, even if I did. This sounds obsessive, and I hated it. I hated even more that I couldn’t seem to stop myself from engaging in the behavior.

I was thinking about him way too much. More than I had at any other point. More than I did at the height of my affinity towards him. Way too much to heal. The longing and the angst were sickening.

Part of me wanted to bump into him just to get it out of the way — so that I could stop worrying that I would.

But almost a year later, I hadn’t. Not even in passing, from the other side of our local Sprouts market, or jogging around the community park have I seen his face.

It’s interesting to me that the shortened physical distance hasn’t impacted the enormity of our emotional breach. I may as well still be a 25-minute drive away.

Perhaps not seeing him around is a good thing, and fortune has favored my solace.

The irony is I’ve seen the guy out at events, the kind we used to attend—concerts, art exhibits, and the like. It makes sense. We still enjoy the same things, just not together.

The first time I saw him, he was with a woman.

My heart sank on sight. I was with my best friend. So, I returned his quick half glance from across the venue and carried on.

The second time, we were much closer as I walked in front of where he stood. On this occasion, we both had dates. I stared in his face and was planning to speak. It had been so long that I just wanted to establish that there were no hard feelings. But he didn’t make eye contact — just stared off into the distance at anything other than me. I caught him turn to look once I’d passed, however.

No one did anything to betray or particularly hurt the other. So, the fact that this is how our public almost encounters have gone seems odd.

I prefer more emotionally mature resolutions. But we don’t always get the ending that we want or even one deserved. Now I feel confident that nothing significant would have been accomplished by a more intimate chance encounter.

I don’t think of him every time I shift my car into drive anymore.

I like to believe that I’ve been restored. The process may have just taken longer than it would’ve without this variable of proximity.

Sometimes, the likelihood that we might be at the same place at the same time still enters my mind. However, it isn’t from a place of yearning. It’s just a fleeting thought that stems from the knowledge that it could happen. I’d be surprised to see him out and about at this point because I no longer predict such a moment.

I’m preparing to move again, this time by choice.

I’d be lying if I said that the preservation of my mental health didn’t play a role in this decision. But it is only a role. There are other contributing factors. Though I’d also be lying if I didn’t admit that I look forward to making a coffee run without the weight of anticipation or avoidance on my heart.

This experience epitomizes why I caution against remaining connected to or near ex-lovers in any way, shape, or form if possible. I’m not saying run from the pain. Just run towards peace.