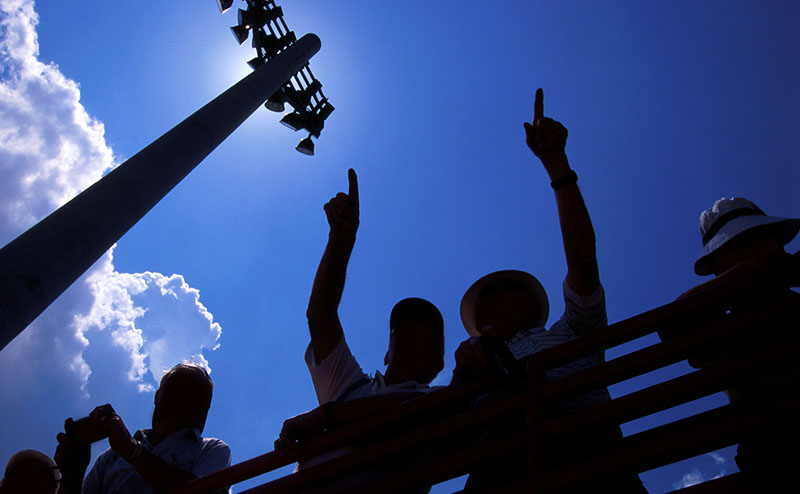 I miss coming home from work, grabbing a quick dinner and then settling down to watch the game before I go to bed and then go right to the MLB Channel while I eat my breakfast to get all the scores from the last night’s games. I miss sitting in the stands on a warm summer evening with my scorebook following the game pitch by pitch. I miss the sounds and smells of the ballpark and I miss the kooks.

Baseball it seems more than other sports seems to attract a large and varied collection or eccentrics both on the field and in the stands. Football fans like to dress up and paint themselves but since most of them have been out in the parking lot drinking for five hours before the game it’s not surprising. Since the early days of the game, baseball has had a long tradition of colorful kooks who help make up the fabric of the game.

Rube Waddell was a dominant pitcher whose career started before the modern game began in 1901. He apparently had a severe case of ADD long before it was recognized but opposing players could break his concentration on the mound by holding up kittens and shiny objects in the dugout. He loved fire engines and was known to leave a game in progress to chase an engine down the street. His greatest years were with the Philadelphia A’s who dominated the early years of the AL but Connie Mack was forced to trade Waddell to the Browns because his antics were affecting the chemistry of his great teams.

Boston Fans in the first World Series in 1903, led by the mayor of the city (JFK’s grandfather), drove the opposing Pittsburgh Pirates crazy by continually singing the song Tessie. The Pirates lost their composure and the series.

Brooklyn was for years known for the Dodgers who in the press were called The Daffiness Boys. Babe Herman, a prolific hitter played for Brooklyn in the ‘20’s and 30’s. He was a prolific hitter, he had a lifetime .324 BA but was more known for his unmatched feat of doubling into a double play. In 1926 at Ebbets Field, he doubled off the right field wall and decided to try for third. Unfortunately, there were already two other Dodgers there. Dazzy Vance who had already been on third had started for home but ran back when the right fielder had thrown the ball to the plate. Chick Fewster who had been on first ran to third and Herman had run with his head down all the way to third. It was ruled a double play and Herman and Fewster were out. He also once was called out when he did not slide into the base to avoid the tag. After the game a reporter asked him why he did not slide and Babe replied that he’d put a half smoked cigar into his back pocket and didn’t want to crush it.

Ebbets Field was known as much for its fans as the team. Hilda Chester became famous for sitting in her outfield seat with a brass bell that she constantly rang and called out plays to the manager across the field in a loud, thick Brooklyn accent. The Brooklyn Sym-Phony was a group of marginally talented musicians who serenaded the fans during the game.

In1976, a pitcher for the Detroit Tigers, Mark The Bird Fidrych, grabbed the country’s attention not only by his brilliant pitching, he led the league in ERA and was the Rookie of the Year but it was his eccentric on filed performance that grabbed the most attention. He would talk to the ball between pitches. He would get down on his knees and smooth the mound with his hands. He would strut around the mound after each strike out. His career was brief, ended after only two seasons due to injuries.

I attended many games in Baltimore over the years and old Memorial Stadium had its own collection of home grown kooks. Wild Bill Hagy was a Baltimore cab driver who became famous for (after many Natty Bo’s it was said)  leading the stadium in cheers from his upper deck seat. In 1989 I had a Sunday ticket plan and had front row seats in the outfield bleachers next to the visitor’s bullpen. My row mate Ralph would show up right before the game wearing an old Oriole’s batting helmet, he’d put down his seat cushion and then pin a picture of the Pope to the railing in front of him. He knew the name of every pitcher in the American League and as they walked from the bullpen to start the game, Ralph would scream out in his leathery voice, “NOT TODAY (pitcher’s name), NOT TODAY”.

A guy we called Norm, after Norman Bates would take air batting practice at the top of the stairs between innings.

I attended a few games up in Philly, those people are in league of their own and probably should be kept behind bullet proof glass.

A friend told me he was at a game at Yankee Stadium when the public address announcer Bob Sheppard between inning announced to the crowd that Cary Grant was in attendance, Cary stood up and waved and above the applause a voice could be heard over the noise saying, “Hey Cary Grant, fuck you!” And the crowd went wild. I attended many games at the Stadium and the noise coming out of the cheap seats in right field was frightening.

Every ballpark in the country I’m sure has its own kooks, it wouldn’t be baseball without them. I miss it all so.

Steve Jaeger spent his childhood on Long Island but has lived outside of Washington, DC for over fifty years. He’s a former chef, an avid baseball fan and lifelong yellow dog Democrat. He lives in Arlington, VA with his cat Hoke.

Facebook24TweetPinEmailShares24
wpDiscuz
0
0
Would love your thoughts, please comment.x
()
x
| Reply
Share this ArticleLike this article? Email it to a friend!
Email sent!