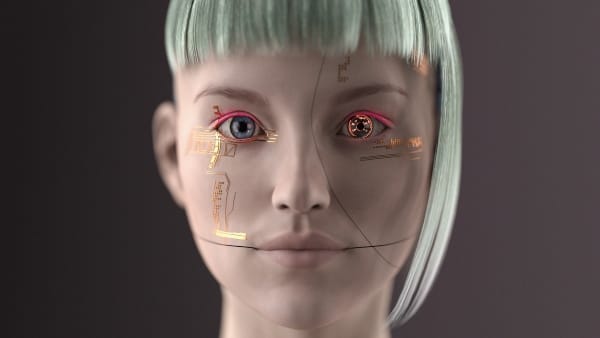 Recently, the BBC broadcast the reaction of Rhian Lewis, a 49-year-old blind mother of two, as she read a clock correctly using her right eye for the first time in 16 years.

Lewis was understandably emotional, and as the first patient in the UK to receive one of the world’s most advanced bionic eye implants—it was one for the books.

At the age of five, Lewis was diagnosed with retinitis pigmentosa, a condition that impairs the light-detecting cells—known as photoreceptors—in the retina, making it unable to absorb and process light. From the condition, Lewis’s right eye is completely blind and her left eye has next to zero vision.

Though the condition has no cure in the traditional sense, Lewis’s optic nerve and the brain circuitry necessary for vision have remained undamaged. The photoreceptors, then, are the only elements needing replacement.

A tiny 3x3mm retinal implant chip developed by German engineering firm, Retina Implant AG. The chip, part of an NHS study of the tech, was implanted into the back of Lewis’s right eye during a daylong procedure at Oxford’s John Radcliffe Hospital.

Retina Implant AG’s tiny chip contains 1,600 electrodes—equivalent to less than one percent of one megapixel—which capture light as it enters the eye and activate the nerve cells of the inner retina. These then send electrical signals to the brain through the optic nerve. A small computer is placed underneath the skin behind the ear, with an exterior magnetic coil sitting outside the skin to power the computer.

Though the technology is certainly improving, the device is not yet perfect, nor does it grant perfect vision.

Patients see flashes of light when the implant is turned on, and after a few weeks, the brain begins to make sense of these flashes, forming them into meaningful shapes. With a small handheld wireless device, Lewis uses dials to modify the sensitivity, contrast, and frequency of the implant.

The images she sees are not seamless—objects are grainy and appear only in black and white—though the implant is indeed life altering for the blind.

“It’s been maybe eight years that I’ve had any sort of idea of what my children look like,” Lewis told The Guardian. “Now, when I locate something, especially like a spoon or a fork on the table, it’s pure elation. I just get so excited that I’ve got something right.”

Bionic eye technology isn’t new, though this is one of the best versions to date.

In 2012, Robin Miller was one of the first patients to receive an implant; yet his was built to last for 18 months, while Lewis’s implant may last up to 5 years. Also in 2012, Australian Dianne Ashworth, who suffered from the same condition as Lewis, received a retinal implant. While the technology was groundbreaking at the time, it contained a mere 24 electrodes, compared to the 1,600 in Lewis’s.

In 2013, the Argus II artificial retina designed at the Lawrence Livermore National Laboratory was the first of its kind in medical visual prosthetics to receive FDA approval. Yet, like the Australian implant, this device only contained 20 electrodes and required patients to wear a sunglasses-like visor.

With 285 million people estimated to be visually impaired worldwide, there is no question that this technology is in high demand and holds massive potential to change the lives of millions. As the technology matures in coming years, the implants are likely to provide better sight even as they become less invasive and longer lasting. And hopefully, they’ll become more affordable and accessible too.

Most significantly, the possibility of full facial recognition for those who haven’t seen loved ones in years no longer seems like a miracle, but a possibility in a not too distant future.