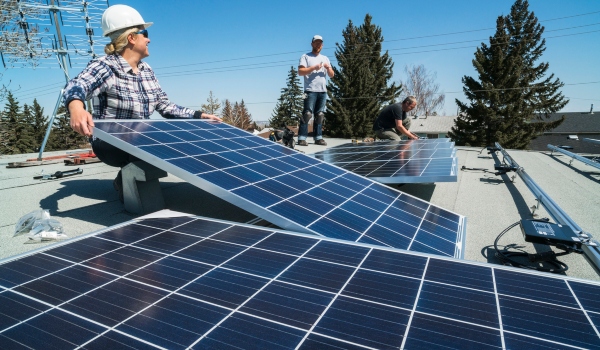 health – People need clean air to breath and clean water to drink. By using solar energy you can cut down on the use of fossil fuels and can provide a healthier environment for all by reducing air and water pollution from the burning of fossil fuels for electricity.

security – Can be found in knowing one can rely on a cleaner form of energy for one’s daily needs.

shelter/housing – is having a physical shelter that is adequate for that person’s environment,climate, culture,and their individual needs. It is being at home and feeling secure in one’s own residence and being able to provide energy for household needs with the use of solar power techniques.

participation – Collective decision-making between the people is needed so that they can all have access to clean air and water. Also so that everyone has the ability to obtain food, clothing and shelter, so that they can live healthy and secure lives. Communities must come together and be informed of the benefits of using a renewable energy source and also decide how they want to use solar energy on public structures, while individuals must also be aware that they can also use these techniques on smaller scales for their own homes.

Since Solar Energy is a natural resource, the use of it can be classified or used through many different cluster. Such as the self-provisioning cluster where you can use solar energy in individual homes through many different techniques to provide energy for your own home. Regarding the currencies and market cluster there is also the individual sales cluster; where solar energy equipment is sold by businesses and the committed services or sales cluster; where solar energy can be used in facilities or infrastructures that are owned by private businesses, the state or by individual people. You can also find knowledge in regards to solar energy through the organizational forms in the free knowledge cluster. Here you can find information on how solar energy works, information about equipment needed to collect and use solar energy, how to install a project of your own in your own home or business and much more. Solar power also allows us to be more cautious and meticulous about the use of other natural resources such as ones that are non-renewable, like fossil fuels.

Relationship to Other Resources

Water– With the use of solar energy pollutants in water can be decreased with less usage of fossil fuel polluting the environment, leaving cleaner water for more people. solar energy can be used in water treatment called solar distillation and it can be used to make saline and brackish water useable. It can be used in a waste water stabilization pond to treat water water without chemicals or electricity.

Land– The large facilities for utilizing solar energy, such as solar power stations or towers, require land to stand on. They are compatible with other land uses – for example, solar energy panels don’t necessarily need a field or tower they can also go on top of pre-existing buildings such as businesses and public buildings they can also go top of nearby residential developments such as individual homes and even small panels on top of speed limit signs to power flashing lights. Large facilities for solar energy stations or towers is affected by how much land is already being occupied in the area. The positioning of the solar energy panels can be affected by the geography of the land.

Minerals- Two of the main ways to collect solar energy are photovoltaic and concentrated solar power, the minerals used in creating the panels for these processes are silicon and the minerals that make up mirrors.

Knowledge- A major area of current research is in the improvement of methods for utilizing solar energy. It is also important for people to know they don’t have to use it on a massive scale and can use it in their home in everyday life. Also for people and companies to make good decisions about where to place solar energy fields and towers, based on the knowledge of the local landscape, of solar patterns, of where people live and of their landscape values.

Living things– With the use of solar energy pollutants in the environment can be decreased with less usage of fossil fuel polluting the ecosystem, leaving it cleaner for plants and animals.

Understanding Patterns of Abundance and Scarcity

Solar energy is the energy transmitted from the sun in light and heat otherwise called electromagnetic radiation. This energy can be used in different ways such as: solar heating, photovoltaics, and solar thermal energy. Other things that can factor into which type of solar energy is used or how it is used is the architecture of the building and whether it is for residential building or for a business. All the different ways in which to use solar energy either way they are broken into two categories, Passive solar energy and Active Solar Energy. This is based on if the technology or the equipment relies on heat absorption (passive) or technology that has moving parts,pumps,or fans (active).

There are many benefits to solar energy, the most prominent one being that it is a renewable source of energy. with the continued depletion of the world’s nonrenewable resources (fossil fuels) it is important that we pay attention to energy conservation and to the use of alternative resources and renewable energy instead of nonrenewable ones.

Applications of solar energy can be wide and varied such as in architecture, urban planning (passive solar building design), agriculture and horticulture (greenhouses), transportation, water heating and treatment, in heating, cooling and ventilation, cooking (solar cooker) and others.

In remote areas of Tibet, passive solar heating is the number one options for energy source for homes because the area has poor transportation conditions and it seriously lacks conventional fossil energy. Tibet is the richest in solar energy because of its’ high altitude and because of the average annual hours of sunshine there is one of the largest in the world. The purpose of this project in Tibet is to provide the people who live there homes’ with acceptable levels of air temperature for the occupants without active heating system.

Solar energy itself is a renewable energy source and therefore won’t run out however the materials used to build the equipment that lets us use solar energy is limited also the amount of solar energy in certain areas could be limtied while in other areas be abundant. Such as in deserts and arid zones where the sunlight can shine longer without the interference of cloud cover while in other areas the sun could be blocked by cloud coverage or not shine there as long. One of the most major concerns about the use of solar energy is the lack of reliability. If using solar energy you often have to pair it with other types of renewable energy (such as wind power or hydro electrics) because the best time to collect solar energy would be at different times of the year depending on where you live and during other periods of time the collection of solar energy you received during those months wouldn’t be enough to support you through times where you aren’t able to collect as much solar energy. Areas that would be affected by a rapid growth of solar energy would be energy use (the type, amount, and price of it), the materials used in the building and installation of solar devices (the types of materials, the amounts, and the prices),as well as industrial activity (companies that provide energy), and other areas. In the last World Energy Outlook released by the International Energy Agency in Nov. 2011 it suggests that we will need and use more solar energy in the years to come so that we have a stable and secure energy supply.

From the Thin Film Photovoltaics: Markets and Industry it shows the worldwide photovoltaic (PV) production from 2000 to 2011 and from 2000-2007 China was with the rest of the leading countries in the world however after 2007 they have steadily increased dramatically until 2010 and they are now the leading country in PV production with almost half of the production alone coming from China.

This post was previously published on Commonsabundance.net and is republished here under a Creative Commons license CC BY-ND 3.0.