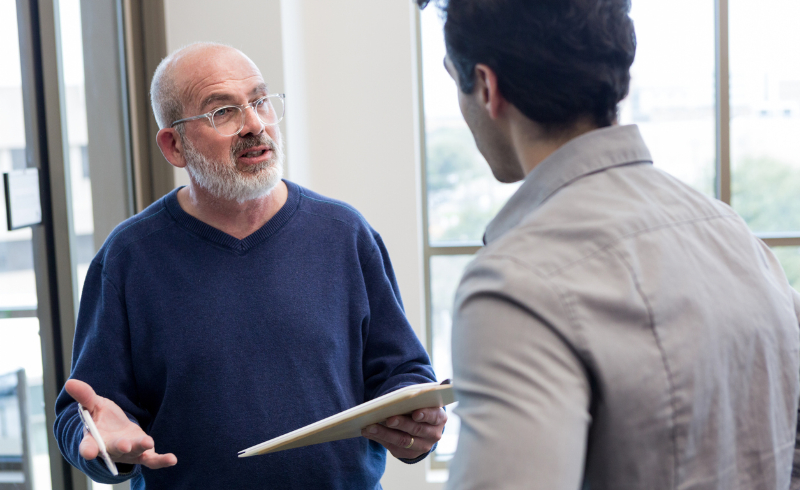 How to overcome anger towards your father and become your own man.

For my 12-year-old son, it was a rite of passage for me to introduce him to Luke Skywalker, Obi-wan Kenobi, and Darth Vader. I saw the first Star Wars movie with my dad at about the same age.

My Star Wars experience as a boy was all about the adventure—rescuing Princess Leia, wielding a lightsaber, attacking the Death Star in an X-wing. Now, as a man, I get caught up in the father-son dynamic of the original trilogy. I can relate to Luke as he learns that Vader is his father in The Empire Strikes Back and comes face to face with his “daddy” issues.

In Luke’s final duel with Vader in Return of the Jedi, the battle isn’t about who’s better with a lightsaber. The real battle is over Luke’s true identity.

Vader already revealed himself as Luke’s father. Luke’s dilemma is whether or not he’ll be Vader’s son.

Luke and Vader’s biological relationship is already settled. What’s unsettled is whether not Luke and Vader share the same character. Darth Vader says they do—together they can rule the galaxy. Luke says they don’t—he’ll never submit to the dark side of the Force.

In the final seconds of their lightsaber battle, Luke gives in to Vader’s taunting. Luke allows his anger to take control. In a wild rage, Luke clashes with Vader. Luke’s lightsaber finds an opening in Vader’s defense, and his lightsaber severs Vader’s hand from his arm.

As Vader lays on his back waiting for Luke to kill him, smoldering wires protrude from Vader’s forearm. At the moment, Luke is reminded that he too is part machine. He realizes he is, in a sense, like his father.

Facing the Dark Side

Many men deny any resemblance to their father. Underneath that denial is a deep-rooted hurt and anger that they carry on their shoulders, because they entered adulthood with unsatisfied needs in their father-son relationship.

I was one of those men.

I went to great lengths to avoid any contact with my father. My hurt and resentment was so strong. If I avoided being around him, I could avoid feeling the hurt and anger. Rather than deal with my feelings about my father, I kept them stuffed inside. But they showed up in other relationships, especially in my marriage.

It started on my honeymoon.

My wife was homesick and wanted to go home early. I took it personally and discovered that I had an explosive temper. Over the months and years ahead I became verbally and physically abusive.

When a man who doesn’t want to be like his father and realizes he is, there is at least a moment of crisis. To deny any comparison is to become more like the father that he doesn’t want to be. To accept the comparison and see the resemblance is to open the door to positive change.

Challenged by the Emperor to finish off Vader, Luke refuses. He sees past his anger, past Vader’s dark exterior. He accepts the similarities he had with Darth Vader and knows he doesn’t have to embrace Vader’s evil qualities. Behind Vader’s hard mask, Luke trusts there is still a seed of goodness.

It wasn’t that easy for me. I held on to my anger for a long time. It’s called resentment.

Resentment of our fathers sets us up to have father issues. We’ll do battle with these issues as long as we remain angry. I call them “daddy” issues because they start in childhood and prevent us from developing a healthy identity as a man.

We develop dysfunctional coping habits.  These habits are the six signs that you’re a man with daddy issues:

2. You’re unconcerned. It’s difficult for you to walk a mile in someone else’s shoes because you’re not comfortable in your own. You find it impossible to relate to others experiences emotionally. What concerns you most is how something impacts you.

3. You’re disrespectful. It’s not on purpose. You just don’t have a clue how to show respect.

4. You’re commitment-phobic. You learned early in life not to rely on people. They were unreliable. They always disappointed you, and that hurt. To avoid being hurt again, you avoid making commitments.

5. You’re irresponsible. You were never able to figure out how to do things right. It seemed like the rules always changed. Rather than be blamed for things going wrong when you do everything to try to get them right, it’s easier just say, “Hey, it wasn’t my fault!”

6. You’re unaffectionate. If you were touched at all as a child, it was to have the crap beat out of you. Showing affection by touching someone doesn’t come naturally for you and feels awkward.

Overcoming these issues in my life started with a willingness to forgive my dad. I came to a point where I realized there was nothing to be gained by holding on to resentment for him not meeting my expectations. Once I arrived at adulthood, it was too late for him to do anything about it.

Once I forgave my dad, then I stopped looking for him to make things right in our past. It was then that I was able to form my identity, and to no longer be afraid of being like him. And I was able to see the good in him alongside the bad.

I didn’t get there without help from my wife who encouraged me to get help from a counselor. She saw the good in me alongside the bad. I’ve also learned from men who have acted as mentors in my life.

With the help, I got I put my efforts into developing the good in me. I learned and strengthened habits that counteracted my dysfunctional coping habits.

There is a constant struggle between light and dark in every man’s life. It does none of us any good to focus on one side without acknowledging the presence of the other.

You’ll never have to face Darth Vader in a lightsaber battle. But when you choose to face the dark side of your daddy issues with a willingness to forgive your father, you’ll be taking an important first step towards a happier life and healing in your relationships.

What have you done to face your “daddy” issues?

Jon is a teacher, coach and counselor helping Christian men discover lasting happiness and holistic healing so they can thrive in life, love and work. Follow this link to see if you're ready to thrive and get a free gift. Jon blogs weekly at www.jonbeaty.com.

I thought when my father died it would make us even and I would feel released. Instead I am almost paralyzed with guilt and grief with no way to resolve it. My marriage is almost exhausted. Don’t make my mistake.

Thank you for this article! It’s been cathartic to read. Your list really resounded with me. My father is a good person but has never been a good role model for emotional self control as he displayed a lot of aggression during my childhood. He has his own problems from childhood that will never be resolved. As an adult what mostly bothers me about him is how he makes no effort to talk and actually blocks my communication with my mother. Anyway thank you for sharing, it always helps to not feel alone in this regard.

Were you able to forgive your father? Or are you still trying to do it?

I’ve sent this to my partner who I believe is experiencing the exact same issues and think your words will prove more substantial than mine. I cannot thank you enough for sharing your experiences.

So, where did you begin to find yourself? Something what steps did you take, or learn. To help you move in a positive direction? I have issues with both parents. I am a Christian man, who loves his wife and children. However, I am failing. I’m a great dad, but a not so great husband. I am married to a woman with daddy issues. Suggestions?

Great list, I’ve know many for whom this list would ring true–the ultimate irony being that in avoiding other’s unreliability one becomes unreliable themselves.

Katerina, Thanks for your comment. It is the ultimate irony.

Wonderful Article! Thanks for sharing.

Nathan, Thanks for the positive feedback! Glad you liked it.

Check to all that you have said about how it affects your relationships. I bear no anger to my father, it is my mother that I work to forgive, but the effects are still the same.

Ethan, Thanks for your comment. You’re right — mother wounds can mess us up just as much.

FacebookTweetPinEmailShares1.2k
wpDiscuz
12
0
Would love your thoughts, please comment.x
()
x
| Reply
Share this ArticleLike this article? Email it to a friend!
Email sent!