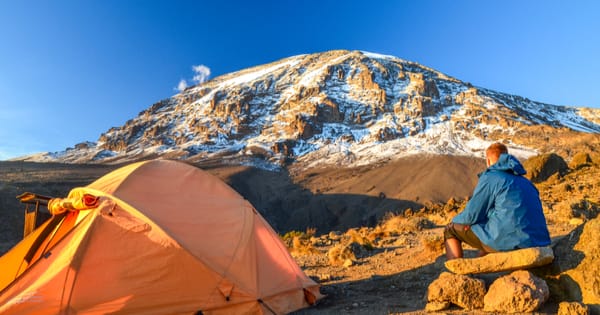 You wouldn’t think Goldman Sachs would have much in common with Mount Kilimanjaro. One’s a Fortune 100 investment banking company, and the other’s the tallest mountain in Africa and one of the Seven Summits. Yet as I scaled the latter, I couldn’t help but think of my days (and nights) in my New York City office. I thought of how, oddly enough, my financial career helped me build the resilience and grit I needed to climb Kilimanjaro.

Investment bankers at top firms worked an average of 82.3 weekly hours last year, and hundred-hour workweeks weren’t uncommon during my time at Goldman Sachs. To understand what that looks like, imagine working all the way through the night, then catching an hour or two of sleep under your desk. Rough, right? Now picture doing that almost every day. If I ever managed to leave the office on a Friday before 10 p.m., I felt like an escaped prisoner waiting for the guards to catch me in their spotlight.

It’s those physically draining experiences that trained me to do what would’ve otherwise seemed impossible. Sure, reaching one of the highest peaks in the world is different than working in an office all day, but your mindset changes after spending 48 hours straight preparing for a multibillion-dollar transaction. Once you survive one treacherous adventure, what’s one more?

Mount Kilimanjaro: A Test of My Resilience

My time at Goldman Sachs may have fortified my mental resilience, but it didn’t physically prepare me for the Mount Kilimanjaro experience. The climb was immensely uncomfortable at first. My body hadn’t assimilated to the altitude for the first few days, and I was constantly out of breath. It was raining much of the time and cold at night. I felt like I had no energy when I needed it the most. But I thought back to the sleeping bag under my desk at work and how I could keep going the next day. I thought to myself, “This is fine.”

As we started the final slog to the summit at midnight, it was pitch dark and freezing and we were moving slower than ever. I thought back to spending weekends and holidays at the office to remind myself that I’d been through worse — and the scenery at work wasn’t nearly as beautiful.

Considering I’d never done anything like this before, I had to rely on confidence and optimism to push through. I didn’t know what the weather would be like the next day. I didn’t know how far I’d need to walk or how long the entire journey would take. All I had was the will to see it through.

Resilience in My Personal Life

Summiting Mount Kilimanjaro not only built my resilience but also fueled my appreciation for what I already had. The combination of those qualities that helped me conquer Kilimanjaro — perseverance, resilience, determination — were the same ones that had helped me through the big financial downturn in 2008.

That year, 2.6 million people lost their jobs. It was the hardest hit to employment the country had seen in over 60 years. I was in my 20s then, and I’d been working in finance during some of its best years: between 2004 and 2007. I lived in a bubble where my biggest concerns were about which bars my friends and I would stop by after work. Then suddenly, half of those friends were out of jobs.

I hadn’t thought about how life can change so quickly and how something so promising can evaporate without notice. That experience pushed me to a point where I had to endure those unexpected twists and turns and learn to adapt as quickly as possible to thrive. I understood I’d been given an opportunity to continue growing in my career. Even if it disappeared the next day, I’d either find a way to change it or I’d be thankful for what it had been and move on. Regardless, I would carry a deeper appreciation for and commitment to whatever was in front of me.

The Kilimanjaro climb later became another time I found myself needing to adapt quickly, and it made me work harder to maintain and maximize what could be taken away at any time. Like my experience in finance years before, I found myself tapping deep into my willpower to stay committed to what was in front of me.

Tackling Your Own Climb

It’s not like climbing Mount Kilimanjaro meant that I could then sit back and watch my problems solve themselves. What I learned is that I could challenge myself and build resilience in many different ways. Here are a few strategies to develop resilience in your personal and professional lives:

Climbing Mount Kilimanjaro requires more than just the physical strength for a seven-day hike to 20,000 feet. It also calls for mental stamina to withstand the journey. That’s why cognitive training is central to achieving difficult goals like climbing a mountain — or founding a startup.

You need to build the mindset that you will make it — that this difficult experience will be worth doing whatever it takes to see it through. Our company has a bimonthly book club, and our most recent selection was “Grit” by Angela Duckworth. The author advocates pushing yourself to commit to doing one hard thing every day that you typically wouldn’t pursue — what she terms the “Hard Thing Rule.”

This is one way to build your muscle for tackling new challenges on a regular basis. Whether it’s learning a new language or practicing an unfamiliar skill, this ritual primes you to embrace challenges when they appear. However you go about it, the key is to develop a growth mindset that gives you the discipline to maximize your performance — and your chance of success.

2. Prepare to Be Unprepared

Whether you’re running a marathon or giving a presentation, preparation and practice are key to success. That said, you can never anticipate every single eventuality. Something unexpected is bound to happen. Building an early-stage company, for instance, is more like sailing than driving a motorboat. While you can ramp up the engine of a motorboat and head straight to your destination, sailing is much more vulnerable to the winds and current. You have to adapt to all the zigging and zagging.

Amidst your physical and mental preparation, remember that your plans are going to change to some degree. I often tell my team that you’ll be disappointed if you expect to set a course that’s a direct shot to the finish line. But if you build your resilience and allow room for the unexpected, the optimism and adaptive skills you gain along the way will continue helping you make it to the other side.

Climbing Mount Kilimanjaro was stressful, but it would’ve been unbearable if I didn’t want to do it and I wasn’t there with my friends. Even if we didn’t make it, I’d still be reminiscing about the agonizing yet rewarding experience of hiking for several hours straight.

Really, that’s what resilience is. It’s not just the determination to accomplish something. It’s the willingness to experience joy and loss and everything in between.

While your journey will be difficult and tedious at times, you should also be having fun — at least most of the time. Your goal shouldn’t be to impress other people or to show off some newfound finesse. Instead, take on the difficult tasks that you can genuinely enjoy along the way.

There are countless ways to collect success stories and learn how to surpass obstacles you didn’t even know existed. You’ll face plenty of Kilimanjaros over the course of your life and career, and these mountains — literal or figurative — will test your mental and physical resilience to teach you lessons that endure long after you’ve tackled them. Failure or not, the process is a win in itself.

Alex Song is the CEO and co-founder of DojoMojo, the one-stop home for partnership marketing where businesses of all sizes can connect to grow their audiences at a fraction of the cost of traditional paid channels. With a passion for early stage growth, Alex is also the founder and CEO of Innovation Department, a tech-enabled consumer brand-building platform. Prior to launching these companies, Alex worked at Goldman Sachs and Pershing Square Capital Management.

Facebook33TweetPin1Email1Shares35
wpDiscuz
Share this ArticleLike this article? Email it to a friend!
Email sent!