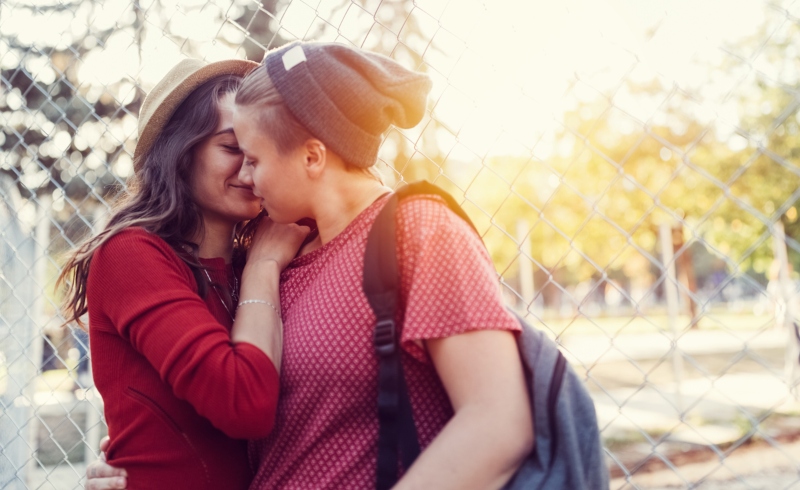 Sexuality is not a choice but if I could choose, I would still choose to be a lesbian.

I first started questioning my sexuality at 17. I soon identified myself as a lesbian and, since then, have exclusively dated women. But the older I get, the more I realize that being a lesbian is not just about the people I date and have sex with. It’s about my lifestyle.

If I switched my girlfriend for a boyfriend, it would have a ripple effect on many areas of my life. I seriously can not imagine being the same person I am today if I didn’t have 15 years of “lesbian experience”. It has shaped me as a person, and keeps doing so. And more importantly, I like it. Here are 7 reasons why.

1. There Are No Gender Roles in the Relationship

“So who’s the man?” — we have all been asked the dumbest question on Earth. Typical answer: “there is no man, that’s the whole point of being a lesbian”.

But the fact that there are no men involved has an impact beyond the obvious. When a relationship unfolds between two women, you naturally let go of societal constructs and create your own dynamic with your partner. A lesbian relationship gives you the freedom to be who you want to be, without feeling the pressure to behave a certain way.

While we have come a long way since our grandparents’ generation, where gender roles were clearly embodied by both men and women, this distinction still exists today.

“Studies still conclude that even when both partners of a marriage work full time, women still perform the bulk of household work and childcare. This is because of learned gender norms, and the perceived personality traits of women.”

Most of my straight friends in their 30s still struggle with sharing household chores equally. But while they complain about their boyfriends not doing the dishes, they also expect them to be the ones fixing something around the house if it gets broken, for example.

When there are two women in a relationship, who cooks? Who cleans? Who changes the car oil? Who kills the sneaky bug that shows up in the living room?

I love this because it gives me the possibility to find and develop myself as a whole — as a human being, rather than only as a woman.

2. Other People Don’t Expect Anything of You

When my straight friends are in a relationship for a while, they start getting this slight pressure to take the next step. Their families, friends and every other person starts casually asking at every wedding they attend “so when’s your turn?”.

As if they there was nowhere else to go but down that road.

And it continues. They get married, and people start enquiring about when the baby will come. And just a couple of years after baby#1 arrives, people blatantly ask “when are you giving a sister to your little boy?”. Really? Why?

Nobody ever asked me when I’m going to get married, let alone have kids. And let’s be clear: I am fortunate enough to be from a country where same-sex marriage is legal and not particularly frowned upon. It’s not about practical possibilities, it’s about people’s expectations and what they’re used to.

We spent so many decades not being able to do this kind of thing that even now, when marriage and kids are possible for the LGBTQ+ community in so many developed countries, people don’t expect you to do it. And that gives you complete freedom from external pressure, which I love.

3. You Become More Open and Empathetic

I want to believe that it’s impossible to be part of a minority and not feel, at least, some level of empathy towards other people who face some sort of discrimination.

So why would I ever discriminate anyone based on anything at all? This is the one thing I kept reminding people around me when I first came out: being a lesbian is not who I am, it’s just a part of me. And so is everything else, for everyone who is part of a minority.

4. Inevitable Struggles Will Make You Grow

If you are part of the LGBTQ+ community, you will likely face some form of struggle related to it throughout your life. Studies show that “LGBTQ individuals are more than twice as likely as heterosexual men and women to have a mental health disorder in their lifetime”.

It might not be clear discriminatory acts from society. Maybe it will be struggling to tell your family you like women. Or constantly having to come out when you meet new people. Or having to analyse in your new work place if it’s safe for you to let others know about your sexuality.

5. Connection Between Women Is Just Unbeatable

This is not to say that people in lesbian relationships understand each other completely all the time. We are still humans, after all. But the connection is usually easier, deeper and more intense.

Women tend to talk about their feelings more often and more openly than men. This generates a common ground for a different kind of connection, one based on trust and understanding.

6. You Stay Friends With Your Ex’s

My group of friends is basically made up of the closest friends of a girlfriend I had a few years ago. She’s in that group too. And so are some of her other ex’s.

Brandi Carlile, singer-songwriter and openly lesbian, shared in her memoir, Broken Horses, a story about when her ex moved out, and Brandi was already in a new relationship, with a woman named Catherine:

While there is no proven reason why this happens, the truth is most lesbians tend to stay friends with, at least, one of their ex’s.

I don’t know about you but, on my side, most times just because a relationship ends, it doesn’t mean I stop caring about that person. And let’s be honest: once you’ve gotten comfortable with someone, it feels pretty good to have that kind of emotional intimacy as friends, even when the relationship is over.

Better than sex with men? Well, I’m a gold star, can’t really answer that for you. But here’s something even better than my experience: science.

According to several studies, lesbians report orgasming more regularly than straight women. The reason is quite simple: women know the female body, so they know what they’re doing better than men do.

“There are many men who believe they can give their partners an orgasm by just having intercourse,” says Matty Silver, a sexual therapist in Australia. “That only happens for 20% of all women. It is one of the reasons that many heterosexual women fake their orgasm”.

What should I say? Well… you need to try it to know what I’m talking about.

Obviously, I am not suggesting you should become a lesbian just to experience this.

30 something lesbian writing about LGBTQ issues.