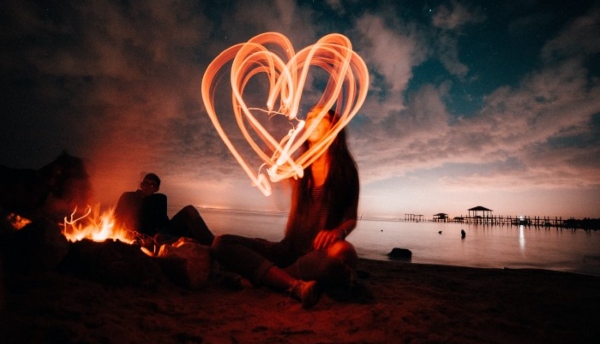 I’m personally guilty of wanting a relationship to work so much that I’ve ignored glaring relationship red flags. I tell myself it’s a minor issue, and not worth ending something I hope will be great. I’ve deliberately blinded myself of obvious relationship deal-breakers because of time already invested.

I’ve learned the reality that those deal-breakers will ultimately creep up again resulting in even more time invested. Ugh.

My greatest downfall is my propensity to being a visual person. I love color, I love things that look nice, and I love the way a potential love interest looks in jeans. This will cause me more problems because I try to fit that person into my life, hoping the fit is as good as they look in those jeans.

Upon studying relationships over the past several years, I’ve become more aware of relationship red flags. Signs that are irritating at the beginning then turn into relationship roadblocks, or worse. These signs are a portal into what the future holds with that individual. Ideally, these signs should not be ignored. But for many of us, it’s so easy to look into the world and see only what we want to see.

A few major relationship downers to be wary of:

Speaks poorly of their ex-partner.

Ouch, I remember hearing one love interest call his former girlfriend the C-word. Yes, he looked great in jeans, but that asshole radar was buzzing. Typically, our initial instinct is to side with their opinions. To give them kudos and attention and buy into the whole one-sided story of their ogre of a C-word ex-girlfriend.

Of course, I’m then curious about that unresolved hostility. And what does she have to say about him? Not to mention an obvious misogynistic attitude towards someone they once loved.

This is a huge red flag, and even more so if you suddenly start hearing that every ex-partner in their lives was a B**** or a C*** or a D***. If they resort to any 4 or 5 letter words in the alphabet then it’s time to put that relationship to rest.

Some may disagree with this point, but I’m leaving it in. At the beginning of a relationship, it’s important to have the same values on sex and matching libidos. It may seem easy to make excuses for the incompatibility at the beginning because we want the relationship to work, but it won’t seem so adorable when these problems begin to snowball.

Someone with a high libido shouldn’t stay with someone that isn’t on the same physical level, and vice-versa. These sexual difference can become awkward and difficult for both parties resulting in sexual incompatibility and resentment. On the one hand, partner number one isn’t getting the amount of sexual attention they want/need. On the other hand partner number two starts to feel inadequate, and guilty for simply being themselves. Neither person is right or wrong, but there’s a possibility that discrepancies in the bedroom can eventually outgrow the relationship.

Mr. or Ms. Perfect can’t hold down a job

It’s great to be supportive of anyone going through a rough patch. And emotional support for someone that lost their job can increase levels of intimacy and trust. However, if said partner is always quitting jobs, losing jobs, or just too selective to ever select a job, it’s time to hit the pavement. It doesn’t look like they have any intentions of taking responsibility, not now, not ever.

Work ethic largely begins in the late teen years. By adulthood, this work ethic is pretty much established. Unless you relish the idea of financially supporting your partner for an undetermined time, you may want to drop them off at the unemployment line with their suitcase.

You work too hard to support someone else who doesn’t share that same value.

Puts down your friends and family

This is a big one, I cannot stand people who put down your loved ones. I once had a boyfriend who would constantly put down my family, my friends and anyone who was close to me until I practically had no one left that he approved of. Of course, as time went on I ended up alone while he ended up with the next tool in his tool kit.

Psychology Today’s number 1 point in what defines a controlling partner is how they put down loved ones and family. Dr. Andrea Bonior Ph.D. explains how an attempt to isolate their partner will begin subtly and barely noticeable at first. This can include complaining about the amount of time spent talking on the phone or telling you to stop associating with certain friends. This can continue until your support network has dissipated. My tool of an ex-boyfriend even insulted my dog once. Can you imagine…

I’ve had friends who do this, when you’re sick they will out-do you. A terrible partner will never acknowledge when you’re feeling down or ill. They will either accuse you of overreacting or overshadow your problem by forcing the topic back to their more important problems.

This person will outdo you on everything, it can become exhausting to keep up. It’ll even get to the point where you will no longer share your problems and suffer in silence while settling for their narcissistic ways.

My suggestion, never settle for someone who lacks empathy, (or insults your dog), ever.

Keeps you in the dark

So you think you’ve found the perfect person however, they won’t introduce you to their friends or family. Maybe it’s still early on in the relationship which makes sense to keep things compartmentalized however if you’ve passed the 8 months to 1-year mark and still haven’t met anyone in their lives then I would start to wonder why.

Aside from the obvious possible reason such as they’re in another relationship, there could be other reasons as well. They could be anything from being known as a total ****, to being involved in something illegal. They may not be planning to stick around long, or they’re only in it for the sex. Another possibility is they just don’t want to introduce you to someone else in their lives because they don’t want to ‘cement’ the relationship, or make it ‘real’.

Being part of a duo is one of the richest aspects of a relationship. Going out as a couple with other friends is similar to a social-aphrodisiac. You have the chance to see your partner through the eyes of their friends or family. You see another side to them you wouldn’t otherwise have the joy of experiencing.

If you’re being benched, and unable to be a part of their lives, then maybe it’s time to reconsider the next few months of your life.

According to an article in Forbes, approximately 80% of Americans have suffered from emotional abuse, and one aspect of this abuse is “making you feel bad about yourself”.

This will manifest in undermining you, talking over you, making you feel stupid and belittling your achievements. A poor relationship will result in poor self-esteem that can affect your physical and mental wellness.

Does this sound familiar? If so… consider undermining their treatment of you by walking away with your self-esteem intact.

My mother once told me that old saying ‘There’s plenty of fish in the sea’, and that may be true however, I prefer to look at a relationship as something that enhances our lives. I prefer to focus on how someone of interest can fit into my already full and happy life, whatever that may look like.