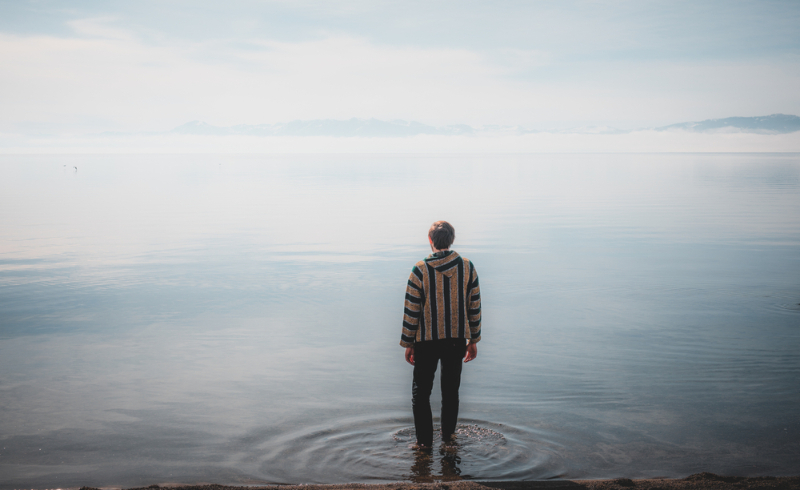 I was on Twitter the other day and noticed a young woman had tweeted: CAN ANYONE HEAR ME? DOES ANYONE SEE ME? I feel so alone and invisible.

When I saw it, the tweet had received 51K likes and over 5,000 comments. I hope she feels visible and less alone. I doubt it, though. I don’t wish loneliness and invisibility on anyone, but I don’t think online attention, or calls and visits from friends, or published books will solve this.

I have certainly felt alone and invisible. When I was twenty-four, I spent Christmas in Venice, CA. I had moved there only a month before and my good friend and roommate had planned to return to the East Coast for the holidays. I had no other friends in Los Angeles. I called every family member I could Christmas morning, but by 10:00 AM, I’d hung up the phone for the last time and it was just me and the rest of that day.

I decided to go to the beach and stroll the boardwalk. Not surprisingly, it was pretty empty, though a foodbank had set up a station and was handing out meals to the homeless. Everything else was shut down, which did nothing to raise my mood.

I turned toward the beach. The ocean didn’t care what day it was. This is what I needed, I thought. An eternal force of nature, indifferent to man’s rituals and calendar.

It was a little better. I walked for twenty minutes and passed three joggers and one couple with their dog. I wondered if any of them were famous. I wanted to be famous.

I was in LA because I thought I wanted to be a screenwriter. The city was huge, the entertainment industry intimidating. I had no contacts, no inroads. I was a nobody, desperate to feel like a somebody. I’d write something, I knew, but everyone was writing something. That was the joke. Everyone in LA had a screenplay. I hated that. I hated thinking that everyone was trying to do what I was here to do. It made my efforts seem like one of the grains of sand on this beach.

Then I saw her. Well, I heard her first. I was looking out at the water, my mind caught in thoughts of fame and insignificance when above the ocean’s steady hush, I heard a single, feminine sob. It so surprised me, like the call of a rare bird, that I turned immediately in its direction. There she was, a young woman about my age, sitting on a dune, her head in her hands, trying, it seemed to me, to weep as quietly as possible.

For a moment, I considered going to her, but we were strangers, and in my experience, grief of this kind wanted to be left alone. So, I walked on, and the sound of her stifled tears was quickly consumed by the wind. She remained much on my mind, however. I would later joke to my friends that she was a perfect symbol of my only Christmas in California, but the truth was she soothed me.

Her sadness seemed real, the yolk of the human heart spilling out of a cracked shell. The ocean was real, the joggers and dog-walkers and homeless people were all real, and I was quite real as well, but reality often felt like something waiting for me once my dreams were realized. Until then, I lived in a shell of a life. By the time I returned to my car and drove home, I had stopped thinking about Christmas and friends and fame. It was just another day where, when I got back to the apartment, I watched TV and read and listened to music.

As I got ready for bed that night, I thought how I didn’t want to spend my days in sadness, but sometimes sadness felt like the most interesting part of life. That was when a person has had enough, when they can’t pretend, when they want to change. Yet I was also as afraid of grief as anyone else. I was twenty-four, and I didn’t know what to do with all this, and I still felt like I just wanted to be successful, that that would somehow solve my problems.

I have no idea if the woman on the beach was aware I had passed her. Probably not. She certainly would never know how she’d helped me a little that day, just as that woman who felt alone and invisible will also probably never know I read her tweet and am writing this now, just as I never know everyone who reads my books or essays.

Invisibility is such a believable illusion. You put your head in your hands and the world goes black. It’s never other people who can’t see me, just me staring into the hole of what I thought I was supposed to be.