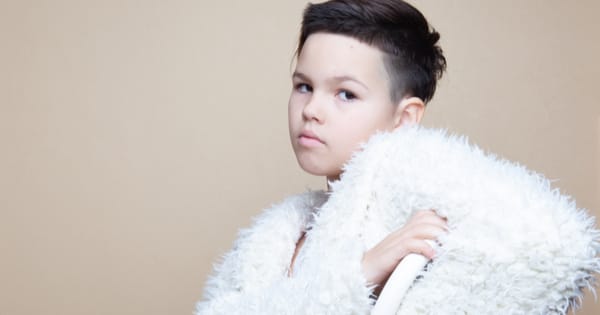 We’re trying on different pronouns in our household.

Before school started, my partner and I asked the big kid, “What would you like to say, this year? ‘He’ or ‘she’?”

An hour later, we were discussing my show, Head Over Heels, in which a trans actress plays a non-binary character. My older kid is officially obsessed with this gender-bending character (played by Peppermint, the drag queen famous for her stellar turn on RuPaul’s Drag Race as well as for being the first contestant who was outwardly trans before competing on RuPaul.)

In the conversation with my kiddo, I had to backtrack with her saying, “But wait. You know Peppermint is a trans woman playing a non-binary role?”

An hour later, I sat with her/they said, “Now, sweetie, do you want me to say something to your teachers about how you want to be addressed?”

“Daddy,” she/they said, “can we stop talking about this? I’ll handle it.”

On the second day, while walking back from school, I had both kids with me and inadvertently referred to she/they as ‘he’, at which point I turned to she/they, again, to ask, “Wait, honey, where are we, now? ‘She?’ ‘They?’ ‘He’?”

The more time passes, the more I feel like I’m betraying her by ever calling her him. “Her” feels more right.

Which leads me to our milestone: we alerted the teachers via email about my kid’s fluid self-expression and let them know, “We’re just rolling with it. Hopefully, you can too?”

There are times it’s cool to be flexible. And then I realize (as much as I’d like to live in a world without definition) that people need labels and definitions so we’re all speaking the same language.

Yesterday, my kid was benevolently outed by an old friend in class to one of the new friends. The old friend said, “But he’s a boy. He just likes to wear dresses.”

Which then led to a cavalcade of questions for the teachers, which freaked them out (understandably) because we were all just “going with it.”

I want my child to be proud of who she is. I want her to celebrate her differences and never feel defensive or shamed. I want her to be able to speak about who she is and inspire the truth in others.

I don’t think she needs to be locked in a box of hyper-definition. In fact, I don’t think my kid can really be defined, right now, except as gender-fluid. Nor need she be.

So my partner and I put our heads together and strategized how to let our precious first-born write her own narrative, be in charge of her story, and define herself for others.

The worst thing would be to pretend she never was a boy. I don’t want her peers, teachers, friends or acquaintances to think she’s keeping secrets or making things up. We have old friends at school who know from whence we’ve come. There’s no reason to shun/deny/erase that part of her history.

What she is is what she’s choosing to be, right now; and we get to celebrate it and show how badass she is for choosing to be her.

Suddenly, in discussing this with her (which is taking time) I’m this over-aggressive tiger dad suffocating my child in inspirational sayings like “you’re all the more special for being so brave and special! for choosing your own path which isn’t always clear or easy. But you’re doing it! That makes you so awesome!”

She is FULLY giving me the rolled eyes and begging me to “stop talking about this.”

Sorry, kiddo. Can’t stop; won’t stop. Because I’m doing my best to armor you for a tough world – and it’s tough for all of us. So you might as well suit up, now. Because you’re way ahead most of the rest of us in terms of knowing yourself and speaking your truth.

And I’m so proud of her for that.

So that’s where we are, now.

Facebook209Tweet1PinEmail1Shares211
wpDiscuz
0
0
Would love your thoughts, please comment.x
()
x
| Reply
Share this ArticleLike this article? Email it to a friend!
Email sent!