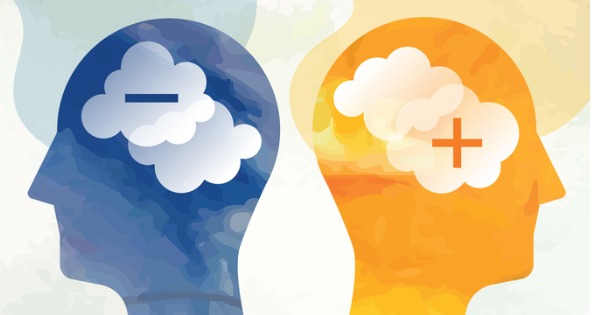 We dance round in a ring and suppose,
But the Secret sits in the middle and knows.

In The Feeling Good Handbook, a bestseller written by Dr. David D. Burns and published in 1989, ‘All or Nothing Thinking’, or ‘Polarized Thinking’, is ranked at the top of a list of 10 common cognitive distortions — i.e., thoughts that cause individuals to perceive reality inaccurately, and can contribute negatively to mental health.

Psychiatrist Aaron T. Beck first proposed the theory of cognitive distortions in 1976 (Burns was his student).  Beck’s seminal work helped to uncover and define a familiar grouping of thoughts that people tend to experience that are either false or exaggerated.  With these findings as a foundation, Beck pioneered Cognitive Behavioral Therapy (CBT), a short-term method of treatment (as opposed to traditional psychoanalysis) designed to change patterns of thinking or behavior that are behind people’s difficulties, and so change the way they feel.

As Beck said, “It is the interpretation that hurts, not the fact itself.”

But why do we have a tendency to distort facts in the first place?  Why, usually automatically, latch on to a blatantly false belief that has the potential to damage psychologically?

According to an article in Health Line (What Are Cognitive Distortions and How Can You Change These Thinking Patterns?), it’s because the lie we tell ourselves, so to speak, helps us cope during times of extreme stress or when faced with an overwhelmingly difficult situation.  As stated in the piece:

The more prolonged and severe those adverse events are, the more likely it is that one or more cognitive distortions will form. One early theory even suggests that human beings might have developed cognitive distortions as a kind of evolutionary survival method.  In other words, stress could cause people to adapt their thinking in ways that are useful for their immediate survival. But these thoughts aren’t rational or healthy long-term.

Ah, there’s always a catch.   Like gobbling comfort food when upset or unsettled.  Those heaping spoonfuls of gooey macaroni and cheese or that triple cheeseburger and fries tastes great and feels good in the moment, but how many times does such an eating choice take a fast(food) turn to the negative, either emotionally (guilt) or physically (indigestion, blood sugar spikes, bloating, etc.).

The point is, it’s fine to indulge now and again in unhealthy fare, but it’s not fine, and it’s dangerous, to make a habit out of eating such food.  The same can be said about All or Nothing Thinking.  It might get you through a tough moment, but it also might keep you stuck in the moment, or push you into a worse emotional predicament.  As Friedrich Nietzsche postulated, “Extreme positions are not succeeded by moderate ones, but by contrary extreme positions.”

So how do we break the spell?   Jason Kurtz, a psychoanalyst, mediator, award-winning playwright, and author of the memoir Follow the Joy, believes acceptance is the key to working through and moving past All or Nothing Thinking.   He states:

The truth is, it’s uncomfortable not to know.  Do you love him/her?  Will you marry him/her?  What do you want to do with your life?  Do you have enough money for retirement?  What happens when we die?  Am I a good person?  These are deep, important questions.  It frightens us when we can’t answer these questions with certainty.  It feels so much better to say, I love him/her with all my heart.  I know I’m meant to be a teacher.  I have plenty of money for retirement.  I’ll go to heaven when I die because I’m a good person.  This certainty assuages any sense of anxiety we might have about these subjects.  But the danger is, sometimes we cling to certainty, cling to this antidote to anxiety, and it blinds us to an important truth.  A deeper truth.  He/she can be very sarcastic.  Maybe I should not marry him/her.  Maybe I don’t love being a teacher.  Maybe I don’t have enough money to retire.  Maybe I’m not completely certain about heaven.  And, if we’re not really certain, but we cling to a sense of certainty rather than feel the anxiety that accompanies our uncertainty, then we lose the opportunity to truly evaluate and examine the issue at hand, and we also lose the possibility of changing course, if we need to.  So, we marry the person we had doubts about.  We stay in jobs that make us miserable.  We don’t save enough for retirement.  We follow preachers or gurus who promise to get us into heaven.  And, in the deep recesses of our hearts, where the truth resides, we suffer.

I believe that Covid-19, in addition to the horrific damage it has reaped upon our world, has also given rise to, understandably so, as a human way of coping with unrelenting sadness, loss and stress, a parallel pandemic of cognitive distortion, in particular, All or Nothing Thinking.

According to the day’s news and new data, you might be convinced we will never get through this crisis, or that we are completely safe and the virus is gone forever.  The truth most likely is somewhere in the middle.  And that is hard to take.  We want things to be better now, we want to return to normalcy now, we want to live our lives again with freedom and without worry.

But this is not possible.  Not right now.   But if we are able to accept the unknown, as Jason describes, we might still suffer, but at least we will be on the side of truth.  And that is where healing begins, where life is best lived.

And isn’t that everything?

Facebook60Tweet1Pin1Email1Shares63
wpDiscuz
0
0
Would love your thoughts, please comment.x
()
x
| Reply
Share this ArticleLike this article? Email it to a friend!
Email sent!