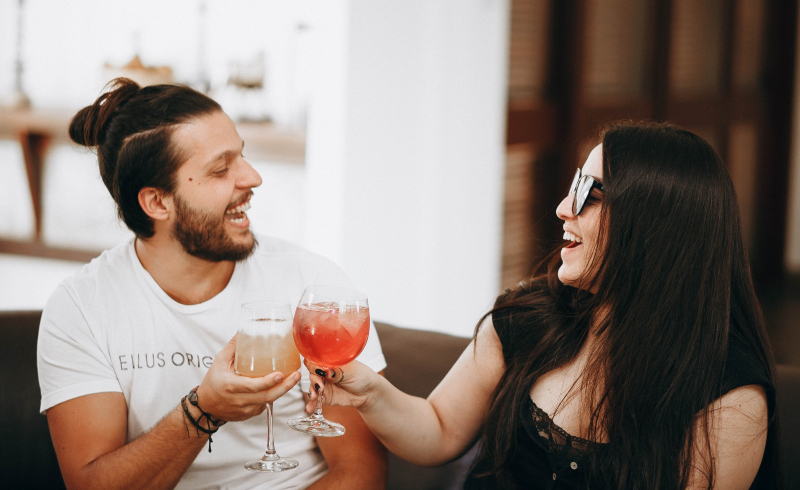 When I was sixteen I had a huge crush on my neighbor that lived down the street from my house.

Over the years we had always waved at each other from across the street and would see each other at our small-town events such as the Fourth of July firework show that the city put on.

At one point he got my phone number and would send me flirty texts when we drove past each other, but I assumed it wasn’t going to go any further.

To my absolute delight, he asked me to hang out one night which resulted in one of the most romantic moments of my young adult life. We got milkshakes, he attempted to teach me to drive stick, and the night ended with the first kiss that ever gave me butterflies.

After that night we saw each other a few more times, but the majority of our communication was over text. There were continual hints that we would end up together and he told me that he liked me over and over again… so I ended up spending months waiting for him to actually date me.

One day I got online and saw that he was in a relationship with another girl. My young heart was broken but that day I learned a very important lesson.

You should never assume that someone is only seeing you until you have had that honest and transparent conversation around commitment.

I always advise people not to put all of their eggs in one basket, or to assume that someone is exclusive with them just because they have gone on some dates and are talking frequently.

As I got older and online dating/social media became more prevalent in our lives it was likely that the men I was dating were still seeing a wide range of other women.

Here were four of the most tall-telling signs that you may be just another date in a sea of many.

#1. They keep you hanging until the last minute

Back in college, I spent my freshman year with a roommate who continually put all of her plans on hold for the guy she liked. Time and time again we would go to dinner or to a party and come back to find her still waiting for this guy to show up, hours after he had said that he would.

Although at the time we would roll our eyes and say that she was foolish for putting her plans and life on hold for this guy, I would be lying if I said there weren’t numerous times when I found myself in the same position.

When I was younger, it was far too easy to cancel plans with friends to allow time for the guy I liked who texted me at some point in the evening asking if I wanted, “to chill.”

The reality is that if someone cares about you they will make real plans with you which will include a time and a place.

#2. You realize that they haven’t deleted their dating apps

Before one of my best friends met her soon-to-be-husband she had been seeing someone for several months that kept leading her on.

Whenever she asked him where things were going he assured her that they were going to be “official” soon. Their weekends were spent together and she met all of his friends and even his parents so she calmed her worry with the fact that soon, he would commit.

Then, one night he was showing her something on his phone when a message popped up on Bumble. Instantly he swiped out of it and didn’t say anything.

Although she understood that “technically” they weren’t exclusive my friend. was hurt because they had been talking for two months and things seemed to be going in that direction.

Seeing that notification pop-up and the fact that he offered no explanation helped my friend realize that they didn’t seem to want the same things.

#3. They post photos of the two of you but there are always other people in them

Prior to graduating college, I started casually seeing Tom who was sweet, outgoing, and ready to settle down even though he assured me that he was fine without any commitment.

After a few weeks, Tom began trying to get a photo of the two of us that he could post on social media whereas I encouraged other friends to jump in.

After a few weeks, Tom got frustrated and asked why I didn’t want him to have a photo that was just him and me. Numerous excuses came out of my mouth but none of them were the truth.

Had I been more honest I would have told Tom that the reality was that I didn’t want to portray that we were exclusively dating when that simply wasn’t the case.

#4. They are extremely vague about what they are doing when you aren’t with them

Years and years ago I was seeing an older man who was extremely secretive about what he was doing when we were apart.

Days would go by without a single message or call from him, and although he assured me that he wasn’t doing or seeing anyone else I had a sick feeling in my stomach every time that we were apart.

Time and time again he would assure me that we were exclusive but I could never get over the feeling that he was seeing other people… and it turned out that I was right.

Eventually, I found out that he had been seeing three other women throughout our short “relationship” and telling them the exact same story that he told me.

Even back when I was sixteen years old I knew deep down that my neighbor couldn’t have liked me that much, because he didn’t spend any time with me. The reality is that I just didn’t want to accept or believe the truth.

I had to learn the hard way that you should never assume that just because you like someone and are spending time with them, that they aren’t seeing other people.

Protect your heart especially at the beginning of a relationship and take the time to really figure out if you and the person that you are seeing want the same things.

Remember… until you have a conversation around monogamy with clear communication, you never have a guarantee on whether or not someone is only seeing you.