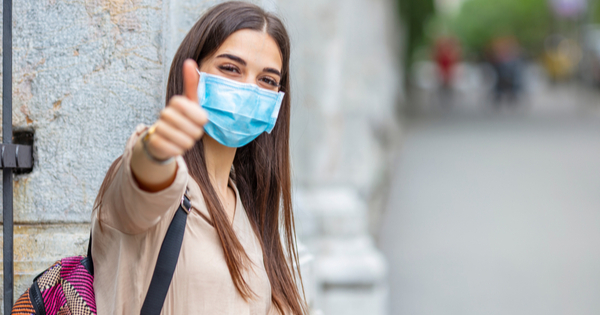 I’m a martial artist. I’m also a rebel. One of my fellow practitioners told me once, “Carol, it’s possible to have freedom with structure. In fact, that’s what martial arts is all about.” It took awhile to wrap my brain around the concept, while wrapping my body around other martial artists, but once I did, a whole new world opened up for me.

How does this apply to a pandemic?

Protestors without masks, and sometimes carrying guns, have become the new face of the pandemic in the U.S. They aren’t the majority, nor are they particularly medically or constitutionally informed. They do present and represent an ugly American face. One not covered in a protective mask.

Whose freedom is actually violated when you don’t wear a mask in public? Mine, and everyone around you. Your freedom shouldn’t have to mean my illness or death.

How do we, as Americans, and as world citizens, practice our own freedom while not infringing on the rights of others? It’s something Americans, at least, should know a lot about. In a democracy, we practice it daily all of our lives.

All of our freedoms are restricted in the sense that we are free insofar as we are not harming others.

When it was acknowledged that second hand smoke causes cancer, smoking indoors and on planes was banned. Your right to smoke outside and in your own home wasn’t infringed. Freedom within structure.

My freedom to drive involves driving by rules and laws so I don’t endanger you on the road. Freedom within structure.

My right to be naked doesn’t preclude your right not to see me nude. Never mind that you might want to. That’s for a different relationship. Freedom within structure.

Why should a pandemic be any different? It shouldn’t.

I really don’t care if you don’t want to wear a mask, as long as you don’t come near me. And I mean a lot further away than six feet. You have every right to risk your own life, but you have no right to risk mine.

There’s a lot more to a Democracy than freedom within structure, but it is part of a strong foundation. All countries and cultures should be about ensuring the health and livelihood of each of their citizens, otherwise, why live in groups?

Pandemics aren’t political. The virus isn’t interested in whether we lean left or right. It doesn’t play favorites. It isn’t Democrat or Republican, Libertarian, or Leftist.

The virus is practicing it’s own form of freedom. Freedom to be carried in the air between people. Freedom to replicate inside any human body it’s able to invade. The virus even has its own rudimentary structure as it moves freely through the world and people’s bodies.

If the virus practices freedom within structure, we should be wise enough to do the same.

Americans like to say that Democracy is the highest and best form of government in the world.

That’s true primarily because we collectively believe that individual freedoms shouldn’t violate the boundaries of everyone else’s freedom. At least not among rational people.

Yes, I’m aware of the situations where this isn’t necessarily true. And I’m aware that not everyone involved in this battle can be considered rational.

But they are citizens of a Democracy, and as such, their right to spread a disease ends at my right not to contract it. That means some structure must be in place to protect both of our freedoms.

Facebook15Tweet1PinEmailShares16
wpDiscuz
Share this ArticleLike this article? Email it to a friend!
Email sent!