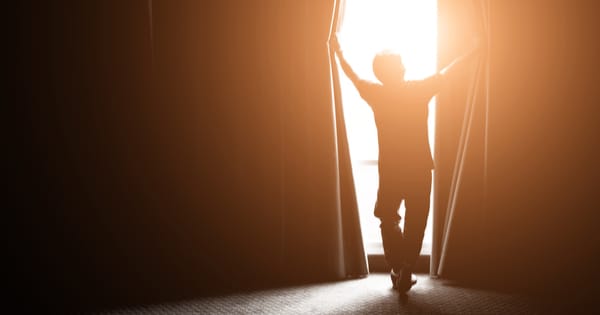 In the aftermath of my wife leaving, sometimes I would sob like a small child.

I spent so many years not crying that I didn’t know I still could—not like that.

For reasons I still haven’t figured out, the trauma (Am I allowed to use that word—trauma?) of divorce rewired me emotionally and I became hyper-sensitive to emotional triggers.

Saying goodbye to my son was, by far, the biggest trigger.

I only see him 50-percent of the time now, my little six-year-old. I cried in front of his daycare provider twice during those first couple weeks. I’d even get teary if some poignant father-son thing was happening on TV.

It was pathetic. But it was also real.

And no one ever handed out the How to Deal with Major Life Trauma manual.

Near as I can tell, everyone just has to take it on the chin. Feel the shock and horribleness. Then make a comeback as a wiser, stronger person.

Throughout the healing process, one tool remains useful no matter which stage you’re in: Hope.

My friend’s divorce was finalized exactly one week before mine.

His story is very similar to mine except he’s an infinitely better human being than me.

At the risk of sounding like I’m celebrating his divorce, it’s hard to put into words how helpful—emotionally and logistically—it is to have him going through the same healing process at the same time.

You swap stories about what went wrong in your relationships.

About the ups and downs of dating after divorce.

There’s someone to play golf with. To have drinks with. To go out with in the absence of your partner.

It was an enormous blessing.

We walked this walk together, and I’ve had a front-row seat to his healing process, as he has mine.

He’s had an active dating life, and I’ve been fortunate enough to be one of his confidants. I hear all the stories. The good and the bad.

Like every person in human history, all those stories have (in varying degrees) unfortunate endings, right up until they don’t anymore.

Every couple that doesn’t marry or end up together forever ultimately has a sad story to tell.

I tried online dating just a couple months after my wife moved out because it was the only way I knew how to mitigate loneliness and balance what I perceived as unfairness that she seemed so happy while I felt so miserable.

It was one of the worst decisions I’ve ever made.

Even if online dating was a good idea (it’s not), I was this totally broken, imbalanced, barely sane freakazoid trying to convince women looking for a future husband that I was somehow a good choice to go out with.

It seems so much crazier now.

I was a total mess.

I’m not a total mess.

I have all kinds of problems. Plenty of life obstacles and self-esteem issues to work through. But I also know that I represent a pretty solid choice for anyone interested in a single 30 something with a child. And sooner or later, someone will make that choice.

I don’t feel panicky about when that might happen. I’m comfortable in my own skin again. I’ve spent plenty of time alone. And you know what? There are worse things.

Which is a big deal. Because at first, I was questioning whether that could ever happen again.

And under the right circumstances, I think maybe it can.

I love the word “hope.” Always have. But I love it even more now, because when you feel totally broken, the only real reason to keep waking up every day is because you feel hopeful that things will get better. And of course, they will.

One time, my friend—the one I mentioned earlier—had three dates in one week.

He told me about all three on our way to a concert. (Lord Huron, suckas. You better get on that.)

One was a total non-fit.

Another had a health condition that was a huge obstacle.

The third seemed… perfect. And still does.

I can remember my son is vacationing with my ex-wife and her family on the East Coast.

I had to say goodbye to him that morning for what was the longest time we have ever been, and hopefully ever will be, apart.

At the same time, I was flying to Reno/Lake Tahoe for a work trip.

Logically, it doesn’t make sense that the geographic distance between my son and I should bear any relevance whatsoever.

I was somehow acutely aware of how far apart we’ll be.

I didn’t break either.

Tears welled. But none fell.

And I knew that meant I was healing.

That everything’s going to be okay.

That I was learning to accept that things are as they are.

As I was driving to work that morning, I passed a little church. One of those places that likes to put inspirational messages on their roadside sign.

This morning it read: “Hope changes everything.”

I thought about my friend. I’m really rooting for him. Hope.

I thought about how much differently I feel than I did in the beginning. Hope.

Originally Published on Must Be This Tall to Ride

Facebook108TweetPin2EmailShares110
wpDiscuz
0
0
Would love your thoughts, please comment.x
()
x
| Reply
Share this ArticleLike this article? Email it to a friend!
Email sent!