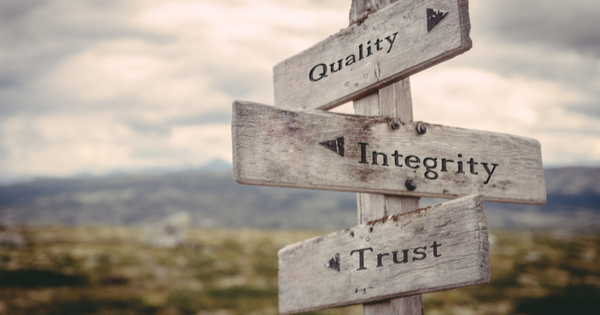 During the recent impeachment hearings, a radio commentator suggested that Republicans are afraid to go against Trump in any way, for fear of being “primaried” next year, and ultimately losing their seats. I said to myself “this is crazy- doing the right thing is way more important than keeping your job!” I had not heard anyone say this – but it seemed obvious to me.

If you are a Trump supporter, don’t worry- there are plenty of other examples. Tobacco executives testifying to Congress in 1994 that nicotine is not addictive. Being asked to do something unethical at your job. We take it for granted that people will sometimes lie, cheat or steal in order to keep their job, that losing your job is a disaster to be avoided at all costs- but I have come to believe that part of being a man is to do what is right at all times- that integrity is everything.

My Dad once was denied tenure at the college he taught because he supported the “wrong” guy to be Dean or something- and I was never so proud of him! I was too young to worry about him finding another job so we could eat and have a roof over our heads- he was my Dad! He will always provide for us! It is easier for me to not worry now because I have no kids to support, and with a lifestyle that is so frugal that I will get by even if I have to go back to delivering pizzas. Or that I never cared much for power or status. Even when I was poor, I felt financially secure.

A Congressman or woman should also be OK if they were not re-elected. Many were rich before they ran for office, and can go back to the private sector and do just fine. Or run for another office. The former Ambassadors and such who testified with dignity and courage you just KNOW will be OK.

The tobacco guys- well, if you are being paid millions of dollars a year you should have enough put away that you can get a house on the beach and drink margaritas and fish all day. Or whatever the hell you want! Volunteer at a homeless shelter, run a small business- the possibilities are endless.

We more ordinary folks often did something in the past that we can go back to until something better comes along. For women, it is often waiting tables, for men, construction, for me pizza-these jobs are available anywhere. And for someone who is financially independent, and has enough FU money in the bank- whatever they want!

The point is that a person is freer to live a life of honor and integrity if their material needs are few and if what other people think of you is not important. The love of money- and power and status- really is the root of all evil- and isn’t it cool to be counter-cultural, to be your own man or woman?

What more do we really need?

I am a semi-retired 61 year old guy from Washington state. I was in several men's groups in the 1990s, and hosted a cable access TV show on men's issues for 2 1/2 years. I consider myself to be an egalitarian, but not a feminist.

END_OF_DOCUMENT_TOKEN_TO_BE_REPLACED

Facebook53Tweet2Pin1EmailShares56
wpDiscuz
Share this ArticleLike this article? Email it to a friend!
Email sent!