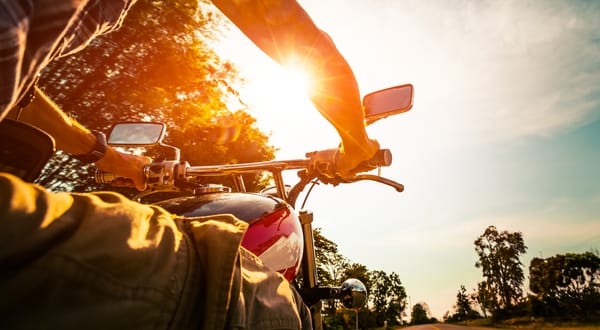 —
In the business world, downsizing carries ominous undertones, because it usually means someone’s losing their job. It can happen for any number of reasons, from a national or worldwide economic downturn to technology and automation making jobs redundant. But the result is the same: the organization shrinks. Ideally, it becomes a more efficient organization, more capable of responding quickly to challenges and changes in its industry. But it’s almost always painful and can be messy. Kind of like getting old.

I got my first motorcycle in 1989, just after I got out of the Army. It was a Honda CB650 of 1970s vintage if my memory still serves me. It had a Windjammer windshield, and I added a surplus military butt pack to the sissy bar. At the time, I planned on enrolling at Embry-Riddle Aeronautical University in Florida and needed some economical transportation. I ended up not going to ERAU for a number of reasons, but I kept the bike until about 1992.

Five or so years later, I got back on a bike, a Harley Ultra Classic. I rode it whenever and wherever I could, including a trip down to Nashville for a wedding. Even when I was working as a funeral escort, I kept the Harley.

You’d think that after riding three or four hours each day, the last thing I’d want to do would be to get on another bike. But the Harley was very different from the Honda Goldwings (and Valkyries) that Police Motorcycle Escort used. The Hondas were smoother-running, accelerated faster, and felt a little more stable at higher speeds.

Before I bought the Harley from Diana’s mom and step-dad, I had on occasion mocked the Harley fanboys for their undying dedication to the brand. I liked the bikes well enough, but I could never quite get into the whole lifestyle thing that many Harley owners adopt. I shared all the jokes about oil leaks, rumbling and shaking bodies after a ride, and the noise from the big V-twin engine with her step-dad, right up until the day he said he was thinking about selling it. One day I test-rode it around their neighborhood and discovered I liked the throaty rumble of the big engine.

The riding styles were very different. As an escort, I somehow became invisible to other drivers, more so than a normal motorcyclist is. I was responsible for getting a dozen or more drivers through an intersection safely, too. It wasn’t just about defending myself against inattentive drivers.

I did most of my escort work in the city, often down four- or five-lane streets. You can’t exactly dip and twist through turns on a big black bike with flashing yellow lights. My boss wouldn’t have appreciated it if I just sat back, cranked the tunes and enjoyed the scenery.

As I’ve said before:

There’s something about being on two wheels that refreshes my soul. It’s long been said that if bikers have to explain it to you, you’ll never understand. It’s much more than just a means of transportation. For bikers, the ride is as much of the adventure as the destination itself is.

But I noticed something after I bought the Goldwing.

I was nervous about riding.

Now granted, it had been a while since I’d been on a bike when I bought the ‘Wing—almost six years by then. But back in 2014, I had what I call my cardiac episode, and started a bunch of new meds. One of the side effects is a general muscle weakness, and it’s affecting my confidence on the bike to a degree.

I’m no stranger to having to pick up a motorcycle. The day I bought my CB650, I laid it down in a turn because I didn’t know what I was doing. I had to pick up the Harley a couple of times as well as multiple Goldwings through the years. It’s not an easy thing to do – the bigger bikes usually run around 900 pounds or so – but once you learn the trick, it’s easier than you’d expect.

I’m just not as young as I used to be though, and so not as strong. I’ve never been a particularly strong person, but I long had good power in my legs, which is what you need when you’re lifting a bike.

It’s just not there anymore.

I’m not quite as comfortable on the bike as I used to be.

The discomfort isn’t about my riding skills. I can still navigate traffic as well as I ever did. It’s something else though, something that I can’t quite put my finger on just yet. Part of it involves the size of the ‘Wing. The seat height on a ’96 is right about 30 inches or so, although there’s a bit of play there. I’ve got a 32-inch inseam on a good day, and I find myself tip-toeing the bike at times, which stresses me given my strength issues. That bike weighs about 900 pounds with fuel too. That’s a lot of metal and plastic to horse around.

It’s limited my riding too, I think. At One Particular Harbour, we lived on a gravel road, and I wasn’t a fan of riding on gravel. Here at Wayfarer’s Refuge, we’re on a main road, but our upper driveway and apron are grass, which is even more nerve-wracking than gravel, at least for me.

All of this is leading me to the idea that it might be time to downsize my bike.

It’s not a firm decision just yet, but it’s something I’m thinking about a lot lately, and I’m becoming more and more content with the idea. I’m not giving up on riding. But I need to be realistic about my capabilities. I want to enjoy riding, and I don’t want to endanger anyone while I’m at it.

So what am I going to replace it with? I’ve got no idea.

I’ve been peeking and poking around various sites, like /r/motorcycles and /r/SuggestAMotorcycle (there really are subreddits for anything!), and Cycle Trader has plenty of options available as well.

Is Downsizing Always A Bad Thing? – Am I getting old or just feeling old? Is there a difference? – Writer | Unfocused
I could see myself on one of these. Yamaha FJR 1300 By David Dawson (originally posted to Flickr as FJR) CC BY 2.0 , via Wikimedia Commons

Several sport-touring bikes look very interesting, like the Yamaha FJR1300 and Honda ST1100/1300 (although the “Pan weave” issue is a little disconcerting). Cruisers like the Kawasaki Vulcan S and Honda CTX have also caught my eye. I also like the looks of several dual-sport bikes, but all of the bikes I’ve seen are at least as tall as a Goldwing if not taller, so that’s not going to help me at all.

I know I want something with some saddlebags and a little bit of trunk space. It’s not like I carry a ton of gear when I ride, but I want to be able to carry my go bag and some rain gear with me at a minimum. We’ll see how things turn out. I’m open to suggestions here. Pop on down to the comments section and share your thoughts.

Don’t forget to sign up for my newsletter, and subscribe to the blog via the link in the right sidebar so you never miss an update. You can also add my RSS feed to your favorite reader. As always, social media shares are appreciated.