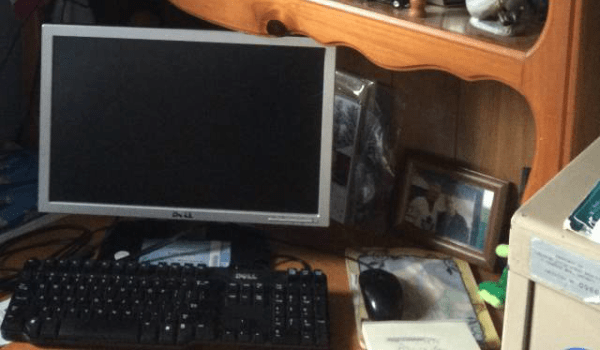 –
This mess of a desk is long gone. It was cleaned up significantly before getting rid of many things that were on it. The filing cabinet to the right of it now has a home with some university students.

In Act 2 of this series of posts, I opened a door into how I wanted to help my Dad out with clearing up the clutter at his home. This was the home I spent the majority of the first 20 years of my life.

When he passed away unexpectedly in December 2013, I was left to try to figure out how we would get his house cleaned out and prepared to be sold. If it could actually be salvaged at all. My brother was working in the far north and entrusted my judgment to do whatever was best for the interests of the house and the estate. In early March just as the spring thaw was underway, I dug my heels in with the help of many people and had the house cleaned out. We salvaged everything that could possibly be donated or sold. We threw out what could not be saved. The end results were several dumpsters full of things. It was gut-wrenching for most of us involved in the clean out. Repeatedly I kept telling myself it was just stuff. It was truly heartbreaking that Dad had to pass away before I realized the level of how much stuff he had. How much stuff I could not believe he held on to.

I will never forget when the cleanup was completed and we took a real estate agent through the home to get a sense of what a possible sale could be like. At that point the house had all of this space. It was a sight to see. It was a real vision of how less is more. It showed potential for what it could still be. There was a chance it could still be of value to someone. Rather than have it sit as vacant property for who knows how long. It could really become something for someone else.

That June, a deal went through and the house was sold. The people who bought it have done an amazing job with the house and property. It does not even look like the house it once was!

The experience of having to manage Dad’s estate on a full-time basis is a story that is being written, and will be told when the time is right.

Have a look around at your life. Look around your house. What kind of clutter could you have less of? Then do something about it. A reduction in physical and digital clutter is the start to a pretty great direction. It is a start to how having less can mean having so much more.

A version of this post was previously published on [site name] and is republished under a Creative Commons license CC BY-ND 4.0.
—

A version of this post was previously published on [site name] and is republished here with permission from the author.

END_OF_DOCUMENT_TOKEN_TO_BE_REPLACED

Facebook21TweetPin1EmailShares22
wpDiscuz
Share this ArticleLike this article? Email it to a friend!
Email sent!