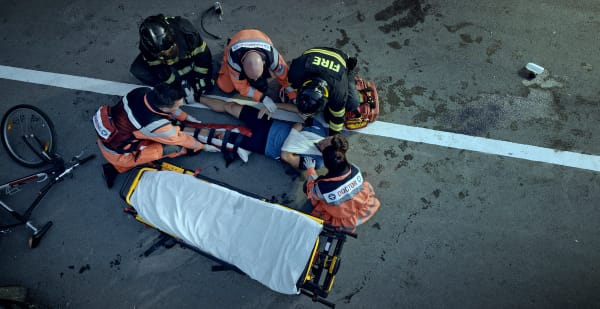 “Stop fighting us Mr. Cann, we’re doing all we can to keep you alive.”

I don’t remember this admonishment—I’d just barreled head first into a minivan on my bicycle—a hospital resident told me the story after I stabilized. But this head injury isn’t what sent me to critical care, it was the internal bleeding.

The details surrounding my bike crash, and my months and years of recovery make an engaging story, but that’s been written already. What I want to paint is a picture of a scared man hanging on a thread of hope.

My first post-crash memory came twenty hours later, after the shock waves quit washing around my brain. After my electrical synapse connections quit stuttering. When my thoughts quit fragmenting like smashed safety glass even as they formed.

I awoke into intensive care. Lights off, but my surroundings clearly visible. TV-like screens lined the walls casting an eerie light resembling black and white horror movies long past midnight. Heart-rate and respiration monitors blipped a red, weak pulse—just like you see during the low-point of a Hollywood movie. Machinery bent and straightened my legs every ten seconds to prevent blood clots.

Yes, I was going to die.

The pain, as you can imagine, was incalculable. But I’ve written about that, too. I want to focus on fear. Despite the damage to my brain and body, the few minutes I awoke during the very late hours of that night are crystal clear. I took a quick assessment of my surroundings, and I begged for my life.

Throughout my adult life, I’ve been moving away from traditional spiritual worship. I slowly decided that Jesus isn’t the “Way” or at least He isn’t the only way. I determined that other than setting the wheels in motion with a big bang and a bit of alchemy, God isn’t actively involved in the happenings of our universe. I’d settled on the notion that the only thing expected of me for eternal reward, whatever that might be, is an ethical life with a heavy dose of helping others.

But that night in intensive care, 4:00 AM, surrounded by machines, alone with my thoughts, considering mortality, I said a prayer. “Do what you think is best, but I don’t think I’ve completed everything I was sent here to do. I’d like the chance to finish.”

The next several days of recovery were a haze of morphine and pain. The drugs and the shock of the accident numbed my sensibilities, not leaving any space for fear. By the time I was thinking clearly, the risk of death had passed.

I can barely remember any of the time I spent in the hospital. It was uneventful or mercifully blocked from my memory, but my one late-night moment of clarity remains with me, sobering and confusing to this day.

A version of this post was previously published on JefftCann and is republished here with permission from the author.

FacebookTweet4PinEmailShares4
wpDiscuz
Share this ArticleLike this article? Email it to a friend!
Email sent!