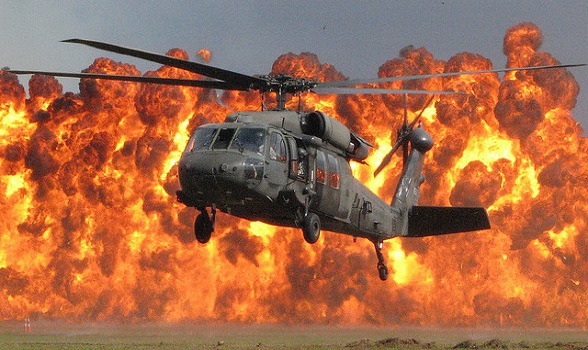 Former Marine and present UN Field Security Officer, Dewaine Farria, shares his gripping insight into courage—told through the experience of his first time under fire.

They may have told you that you’ll be scared, but their words weren’t sufficient. Every rifle crack will reverberate through your guts and snap you neck back. You are going to wonder if these reactions are normal. Fuck normal. You are being shot at. But you’re not being hit. This simple notion will please you immensely. It will, ridiculously, occur to you that no drill instructor is going to yell cease-fire. No one is going to come on the net to say, “No duff. We need a medic.” This ends when you get out, they leave, you’re dead or they are.

Nothing else you’ve done in your career up to this point matters.

“That was a great course Dewaine ran.”

“Man, that was a spot-on threat assessment Dewaine wrote.”

No one is going to say these things. Or if they do, they’ll immediately be followed by, “Yeah, but he went out like a punk under fire.” Or worse, “It’s a damn shame how Shabaab splattered that winning personality of his all over the walls of the UN Compound in Mogadishu.”

The AK-47 hanging around your neck will give you more assurance than all the promises of support you’re hearing over the radio. Afterwards, you will rethink your liberal notions of gun ownership. That old cliché, “it’s better to have a gun and not need it, than to need a gun and not have it,” will repeat in your head. In the world that actually exists humanitarians often need to be protected by people with guns. You have to live in that world. Idealism may be the engine of everything good, but stripped of realism it’s immoral and dangerous.

In your circle the story of the attack will be told and retold. You’ll dislike some versions. Some you’ll actively encourage. None of them are accurate. Eventually you’ll learn how to dodge retellings of the event with a pithy one liner, “It was a bad day.” A bit more dramatic than you’d like, but most people take the hint.

Some people will ask if you “got” to shoot anyone. When you tell them that you didn’t, many of them seem disappointed. You aren’t. Somewhere between the Marine Corps and the United Nations you shed the yearning for violence you’d been carrying around since adolescence. You don’t miss it. Not having anything to prove is a good feeling.

Still, alone at night you’ll continually run the scenario through your head. What could you have done better? What did you do well? You will rethink your notions of courage and manhood. You’ll remember ducking under the table in your short pants, listening to your father and uncles talk about Vietnam or jail or Korea or the Black Panther shootouts in New Orleans’s projects. At the time it didn’t seem bizarre that some of your relatives had experienced several of these situations or that the protagonists in these stories could be a black militant pinned down by NOPD in the Desire Projects or a ‘good old boy’ white Lieutenant in An Khe. It was considered bad form to tell a story that featured yourself in more than a cameo role. The best stories were those that totally eschewed causes in favor of courage – the charge, the heroic last stand – that’s what you and the other boys really wanted to hear about. Later, as a teenager, it annoyed you when they talked as if their experiences gave them knowledge unavailable to other mortals.

Now you replay those conversations in your head, sifting through the bravado. You hear chuckled admissions of trouble sleeping. The shrugged concessions of jumping at slammed doors. Belatedly you pity these men – mentally wounded during a time when we didn’t acknowledge that scar tissue could form on the mind. You also realize that fundamentally they were wrong: violent situations don’t make a man of you. But our reactions to them do serve to remind us that manhood is about more than just identifying as male. Flannery O’Connor described the traits a person displays in a violent situation as those, “most indispensable to his character.” But those traits – important things like daring and decisiveness – aren’t the only deciding factors in manhood. Courage and manhood – that is being a good man – aren’t necessarily synonymous.

After the VBIED detonated at the gate, two armed men stormed the UN compound in Mogadishu. Your guards shot those first two dead. Then another four leapt over the bodies of their comrades and, under heavy fire, penetrated the compound. Later you will call this fanaticism. But in your heart you know it’s a kind of courage. It has been said that the charge is not courage. That any man can charge in the morning, when his belly is full and with his comrades by his side. But that’s not true. Many men can charge, but not all of them can.

There is a reason that men have an innate desire to test their resolve. Mental and physical toughness – the stitching of courage – is about consistency. Instinctively we understand that the consistency necessary to complete “hell week” or even to run a marathon is made of the same stuff that will be tested during a violent situation. And Toughness – endurance of the soul – is like anything else: if you practice it, you’ll get better at it. But the things we do to condition the soul for hardship don’t cleanse it. Toughness and courage make you a valuable man to Shabaab or the UN. So no, toughness and courage don’t necessarily make you a good man. But they help.

And they don’t tell you that.

Excellent writing and thanks for sharing your experience.

a great read,
thanks for sharing your experiences

Have you heard of Michael New? He was an Army specialist who was court-martialed for refusing to wear a UN beret or insignia on his uniform. He took his oath to the Constitution seriously and was punished for it. The UN is a foreign governing body that has no basis to even exist on American soil, or to get us into undeclared “police actions” like Korea and Somalia. Soldiers and Marines are not cops or social workers, nor should they be used as such.

FacebookTweetPinEmailShares165
wpDiscuz
3
0
Would love your thoughts, please comment.x
()
x
| Reply
Share this ArticleLike this article? Email it to a friend!
Email sent!