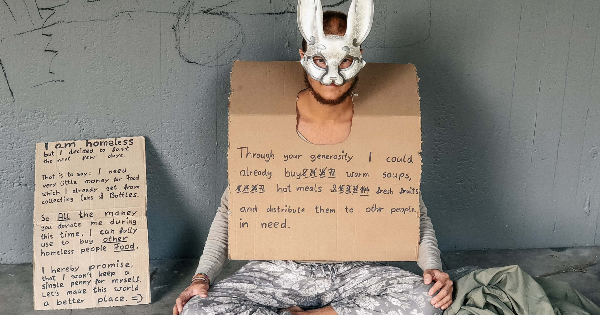 My goal for this one-month challenge was to see whether I can find a way of living, a way of structuring my days, that would allow me to feel at least some form of happiness.

Some form of happiness in a situation that is the furthest away from happiness most people can imagine. I wanted to use everything that I’ve learned during my last 11 challenges and in the years before and turn the negativity of my situation into positivity.

The strategy I came up with and followed for the last three weeks of living on the streets without money comes down to 3 main points, Fasting, Meditation & Abundance. However, I also encourage you to read the main story of my 30-day homelessness challenge.

I decided to fast because I am a huge fan of Gandhi’s fasting practices with homeless people. Fasting as a homeless seems to be counterintuitive, but as a homeless, it is even more beneficial! Why?

First of all, it’s a shift in perspective. Most homeless people’s day, including my own first few days, constantly revolves around thinking about getting enough food. You are a big victim of your circumstances.

When you start to fast this completely changes. You voluntarily decided to fast and to make this commitment. So you’re not a victim anymore, in fact, you’re far from that. You are now in control because you chose to.

And this being in charge of your life is crucial. It gives you the feeling of I can change something here. And it also enables you to focus a lot of your daily Energy on other things than the constant hustle for food. 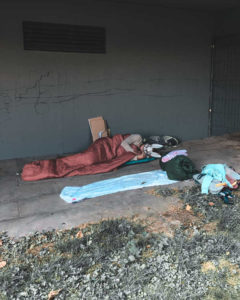 Sleeping spot on the streets

Secondly, many homeless people are malnourished and obese. Yes, you heard right – obese. Many people say: “That person can’t struggle, they’re fat!” I actually did the same, but it’s ignorance. The truth is calories aren’t expensive, nutritious food is.

And so homeless people’s diet is filled with far too many empty calories. Together with very irregular eating patterns their bodies go into scarcity mode and store fat. Most homeless people I’ve met eat loads of things like potato chips, McDonalds, white bread & peanut butter. Complimented is this diet with many soft drinks because shockingly they are often cheaper than water.

Fasting helps here as well because you can either spend more money on one nutritious fasting meal which you eat always at the same time every day or you can save some money for some highly nourishing food after you break the fast.

I ate one nourishing vegan Meal per day. And it felt great. I was not a victim anymore I was in charge again, and in combination with the Abundance Mindset, I was in service for something greater than myself. 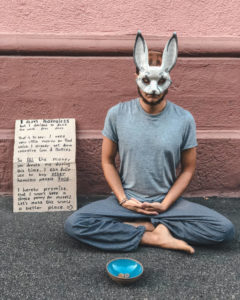 I’ve been meditating for around three years every single day now, and it is hands down the most important skill I have ever learned in my life. This includes everything I learned in School and everything I was taught in University.

It’s not because my School & University was bad, it is because Meditation is that powerful! I don’t want to go into too much detail here. (A Guide & Ebook on Meditation is coming soon) But whenever I sat down to beg, I simultaneously started to meditate.

It’s mindblowing how much it helped me to bear the negativity of begging. It made me realize once again that peace, joy, and happiness is not contingent on the outer world but on the internal. I discovered, that even though people constantly looked down on me because I appeared poor on the outside, I am actually very rich on the inside. And no external situation on earth can take this away from me! 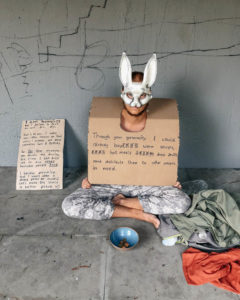 The 3rd point of my strategy was the abundance mindset. The problem of living as a homeless is not so much that your body goes into scarcity mode but that your body is almost always accompanied by your mind too. That’s what is often referred to as the downward spiral. In Tibetan, this is called: Korwa – the self-perpetuating circle of trouble.

I believe it’s essential to avoid this scarcity state of mind at all costs. Of course, sometimes you have to back down/adjust, but never think cheap, never loose creativity, never lose a generous outlook.

An abundance mindset of giving more and being selfless during tough times seems to be counterintuitive in our culture because we believe we are separate. We believe we all have our own problems and that everybody struggles and looks only after themselves. But this is one of the biggest misconceptions in our western world.

We are not separate; We are all interconnected. Stop for a second and think about that.

If what I am saying is true and we are all connected, then it’s also true that if you help someone, you also help yourself. You get back exactly what you provided to others in the first place because this other person is just another part of an interconnected bigger you.

In a scarce situation of having no money and living on the streets, I implemented the strategy of fasting & meditation for 2-3 weeks. My intention was not to fast to keep more money for myself, that would be the fear-based, separation mindset approach. No, Instead I fasted and selflessly gave away every single penny I made to help other homeless people in need and to make them succeed. I complemented fasting & meditation with the complete other extreme – The abundance mindset. 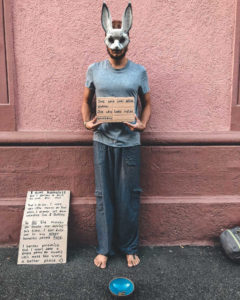 When I begged for myself, I made a few Euros per hour. But when I started to beg for others selflessly, I made around 15-20 Euro’s + an hour!! More than 5 or 6 times as much.

With this amount of money, I was then able to buy food and distribute it to other homeless people in need. Almost every day I sat down to beg this way and I am happy to tell you now, that during the last 3 weeks I saved so much money that I could go for countless walks through the city and so far gifted 78 warm soups, 78 hot meals and 156 pieces of fresh fruits to other people in need.

This made not only them happy but also me. This way I not only created happiness for myself but also for more than 78 other people. On top of that many people were so touched by this selfless act that they shared their food with me now and then. And so I was completely cared for.

This is just a small example, but now imagine yourself choosing an abundance mindset for your life, imagine a world where everyone would do that. To help you, note the difference again: With the scarcity mindset I would’ve made barely enough money for myself. I would’ve done that for a single me, a single mouth and a single stomach.

Together with a victim mentality and an egoic mindset, I probably wouldn’t have had many interactions with others, and so the isolation and the downward spiral would’ve been very likely to increase.

With the abundance mindset, I made five times the amount of money; I gifted 78 soups, 78 meals and 156 fruits to other people in need, I made incredible friendships & connections. I felt even in a situation of being homeless completely happy and fulfilled because these humble, selfless acts of giving felt so good. It deeply fueled me, made me bear my own suffering and gave me a higher purpose beyond myself.

Now even if you’re the biggest rational, materialistic person, isn’t that a proof of the power of the abundance mindset?

Being selfless is not suffering more. It pays back, usually it takes longer because it’s like planting a seed. But this example shows that it can also work very fast. The abundance mindset creates new wealth and stunningly even more absolute, limitless wealth. Because if you help someone, there are two people benefiting, So there is twice as much wealth as there was before in absolute terms.

Therefore I encourage you to meditate, to fast and to be more selfless too. Always make abundance your dominant state of mind. And when you then start to feel that we are all interconnected, you will also realize its implications.

You will see that not helping people becomes not just mere ignoring others but also harming yourself. I believe the happiest persons on this planet are the ones who have figured this out…

This post was originally published on MasterOfLoveAndLife.com and is republished with the author’s permission.

Hi! I am White, a student of love and life and the founder of Masterofloveandlife.com. A platform for men to discover their true self, to learn to go inwards, and to face their ‘other’ side. We help you to transform yourself, to embody the sacred masculinity and with that to change the whole world and make it a better place. Check out Masterofloveandlife.com to find tips on how to use your full potential, to develop holistically and to restore your balance.

Facebook11Tweet2PinEmailShares13
wpDiscuz
Share this ArticleLike this article? Email it to a friend!
Email sent!