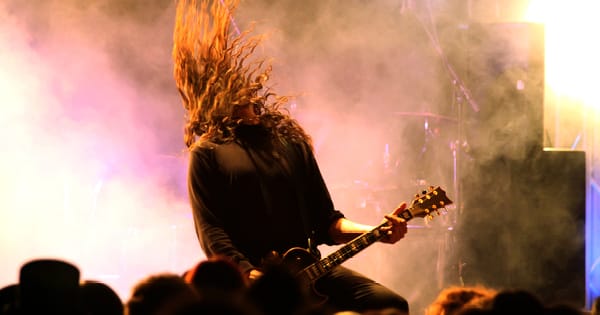 I haven’t seen Metallica live in…

I knew I was old, but I did not see that coming.

It’s insane; I still think of Robert Trujillo as the new bass player, but the truth is that he’s been in Metallica for longer than Jason Newsted’s entire run.

Anyway, the last time I saw Metallica was in 1989. It was their Damaged Justice tour, supporting the album …And Justice for All. They’d given a sneak peek of what was to come on Van Hagar’s Monsters of Rock tour, where metalheads paid festival-price for a ticket to see Metallica and then headed for the exits as Dokken took to the stage.

My friend Brian discovered Metallica in the summer of 1984. To this day still has a rare, possibly-collectible Megaforce Records version of Ride the Lightning on cassette.

(Metallica would soon be scooped up by Elektra Records, who re-released their catalogue. Most people own Elektra versions of Metallica albums.)

Metallica toured so extensively on the Damaged Justice tour that they played five dates in Wisconsin alone. Madison, Milwaukee (saw them there), La Crosse, East Troy, and Ashwaubenon (basically Green Bay for those not in the know. Also, this would be the last time I saw them).

In Ashwaubenon I completed my set of band member autographs. It was a quest my friends and I had begun in Milwaukee.

Because I’m old and out of touch, I don’t know how band security works these days. In 1988, however, you could stand outside in the cold—it was November, and Wisconsin is cold in November—for several hours after a concert next to the band’s tour buses.

So, standing outside next to Metallica’s tour buses after their concert is exactly what my friends and I did.

I don’t remember how many fans started out by the back door to the Mecca Arena—a venue long since supplanted by the Bradley Center and now the Fiserv Forum—but by 2AM it had whittled down to about a dozen metalheads.

James Hetfield was the first out the door.

I remember this because he walked past every kid lying in wait and got on the bus. No acknowledgment; no autographs.

Ulrich or Newsted came next, and they were gracious and both threw their John Hancock’s on anything shoved in front of them while chatting up we starry-eyed fans.

I say “chatting up,” but I’m sure it was more one or two-word sentences. Teenage metalheads aren’t the most articulate people in the world, and we were probably offering up nuggets of wisdom along the lines of, “Dude, you guys fucking rock!”

To which they’d respond, “Cool. Thanks.”

When meeting your Metal Gods, thinking of something to say can be intimidating. You’re an awkward, gangly teenager, and the guy whose hand you’re about to shake just played on stage in front of several thousand of you.

Still, I knew exactly what I was going to say to Kirk Hammett.

One of my friends wanted me to point out to him that we shared a birthday—November 18th for those in the wonder—but I thought that was kind of a lame thing to say. No… I knew what I wanted to say to Kirk.

Back then—and maybe still today; again, I’m old and out of touch—when you saw a rock show every member of the band did a solo. Guitar solo, drum solo, bass solo… the musicians got to strut their stuff, and we kids lived for it.

During that particular show, while Kirk’s fingers were firing up and down his fretboard during his stand-alone moment in the spotlight, I noticed something. As I listened, a sweet something caught my ear, and I wanted to confirm whether or not I had heard correctly.

So, when Kirk Hammett took my marker and prepared to sign his name, I said, “Hey… did you throw some Little Wing into your guitar solo?”

The look on his face was a mix of amazement, and dare I say it, respect.

That’s where the story should end, with me having impressed Kirk Hammett.

But it doesn’t. It doesn’t because I have a big mouth, and I’m stupid.

Not knowing how to follow-up my success, I then told Kirk, “Yeah, Sting did a great cover of it on his last album. I really like it.”

And that was that.

Hammett stared at me flatly, a sort of “Really?” look in his eyes, and then moved on. As quickly as he’d been impressed with me, I’d disgusted him and blown any sort of standing I’d achieved.

I’d taken his homage to Jimi Hendrix and shit all over it with Sting.

I realized it immediately, and it was almost like a movie moment. I wanted to shout out, “No! Wait! I didn’t mean that! Sting sucks! Hendrix is awesome!” but it was too late.

Hammett signed a few more autographs, and then got on the bus and was off to the next city full of mulleted teenage boys wishing they could muster up the courage to talk to a girl.

Several months later, in April 1989, my friends and I were once again waiting for Metallica to leave the arena they had just rocked—this time it was the Brown County Veterans Memorial Arena in Ashwaubenon/Green Bay, across from Lambeau Field.

Part of me wanted to bring up the awkward moment to Hammett; to somehow make it right, but thankfully I knew better. Instead, I just shook his hand, thanked him for the concert, and said he’d already given me his autograph.

(I wasn’t into collecting, which is why I didn’t get him to sign something else. Even if eBay had existed back then, I’m not the type of person to profit off someone else’s achievement.)

This time around, Hetfield was in a more sociable mood, and I was able to finish collecting all four autographs of the band known as Metallica.

Looking back, having seen them in a less-than 6,000 seat venue is the way I like remembering them. Today they play stadiums, and there’s no way in hell anyone is getting to hang out after a concert to shake a hand and get a signature.

I’m rarely nostalgic, but have to admit in this case…

Yeah, yesteryear was a little better.

Don’t like ads? Become a supporter and enjoy The Good Men Project ad free
◊♦◊
The Good Men Project is different from most media companies. We are a “participatory media company”—which means we don’t just have content you read and share and comment on but it means we have multiple ways you can actively be a part of the conversation. As you become a deeper part of the conversation—The Conversation No One Else is Having—you will learn all of the ways we support our Writers’ Community—community FB groups, weekly conference calls, classes in writing, editing platform building and How to Create Social Change.

Facebook1Tweet3PinEmailShares4
wpDiscuz
0
0
Would love your thoughts, please comment.x
()
x
| Reply
Share this ArticleLike this article? Email it to a friend!
Email sent!