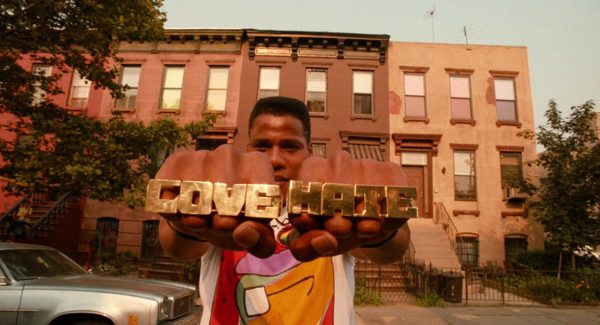 For me, it started with Radio Raheem.

1989: At twenty-seven I wasn’t woke. We didn’t use that term then, which is fine with me because I find it beyond annoying. Better adjectives for me included immature, self-absorbed, sheltered, suburban. In 1988, I moved into Washington, DC. Not into what would be considered a nice neighborhood. My friends and I bargain hunted. We found a stately house to rent for a great price. We were gentrifiers. We took a four-block hop from the area the white professionals already claimed.

I can’t imagine what my neighbors thought of us. Initially, we didn’t interact with them at all. We left for work in the morning, and we came back home when the bars closed. I suppose we popped in for dinner sometimes, but mostly I remember my first house there as a crash pad. I lived in this neighborhood for three years. Slowly, I met some people on my street. I observed their situation. I woke up to poverty and endemic racism. I watched Do the Right Thing.

If you haven’t seen it yet, the next thing you should do in this life is watch it. I’m about to spoil it big-time, but you should watch it anyway. From Do the Right Thing, you can learn in two hours what it took me three years to figure out. The United States is a stacked deck against African Americans.

Do the Right Thing is a twenty-four-hour snapshot of Bedford–Stuyvesant, Brooklyn. Over the course of one day, we meet the residents of a street, begin to care about them, even love them, and then we watch one of them get killed… by a cop. I won’t dig too deep into the plot.

Suffice it to say that three black men (including Radio Raheem) and Sal, the white owner of an Italian Pizza joint, get in a stupid argument. For no reason at, or for a million reasons including gentrification, poverty, race, distrust, and envy, the argument escalates all day. At the climax of the movie, Sal and Radio Raheem get into a fight. Radio Raheem is choking Sal in a headlock when the cops show up. A cop puts Radio Raheem in a choke-hold. It’s possibly the most emotional movie scene I’ve ever watched. A crowd of people beg and plead for the cop to stop choking Raheem, but the officer doesn’t relent until Raheem is dead on the ground.

Does this story sound familiar? It should. It happened thousands of times before Do the Right Thing came out. And it’s probably happened a thousand times since. A white man kills an unarmed black man in what can only be construed as a complete disregard for a black life.

Today, I read When They Hurt – I Hurt on This Vulnerable Life. My blogger friend Emma, who is black but was raised by a white family, talks about the racism she endured in her white middle-class community. She points out situations where allies came to her aid, and other situations when no one did. She finishes her blogpost with the question Will you be my ally? Here’s the deal. I see myself as a strong proponent for racial justice. I’m “woke.” I can proudly say I do no harm (any more), but do I ever do any good? I can’t point to any events where I intervened on behalf of a person who was being discriminated against.

In February of 2012, George Zimmerman harassed Trayvon Martin for walking through Zimmerman’s neighborhood. Martin’s crime was being black. A scuffle ensued. When Martin got the upper hand, Zimmerman shot him. He was acquitted due to self-defense. In the eight years since this event, the #BlackLivesMatter movement blossomed. Every time there was a similar situation, there was an uproar from people, both black and white. Each time, I naïvely thought that things would finally change. Things haven’t changed at all. Here are some other names you possibly know:

On Monday, George Floyd was confronted by police for possibly trying to pass a counterfeit twenty-dollar bill at a convenience store. A short time later, Floyd, face down and handcuffed on the sidewalk was killed by a cop kneeling on his neck. Just like the scene in Do the Right Thing, a crowd of people begged for the cop to stop. Three other officers stood idly by watching.

I don’t know how to be an ally for Emma. Everything that can possibly be said on this topic has already been said. It simply comes down to a pervasive belief that some lives are less important than others. A popular meme over the past few weeks contrasts gun toting liberty protesters with young black men going about their lives. In the memes, the armed white men are treated with respect. The unarmed black men are threatened with drawn guns. If every person in the country doesn’t innately understand the dangerous and truthful irony in these memes, then I’m sorry Emma, I don’t know what I can do.

Photo credit: Do the Right Thing. Watch it now.