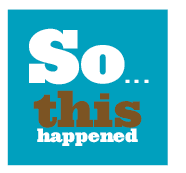 ‘So…This Happened’ is our quick-hitting weekly round-up of some of the biggest stories in sports. Take a read and own the water cooler sports conversations, if any of you have an actually water cooler that you hang out by to talk sports.

The NBA Finals are complete. If you said Raptors in 6 games, you had it right. #WeTheNorth takes the title. On the pitch in France, the US Women’s National Team thump Thailand 13-0. And yet there is controversy? Finally, with the NBA and NHL Playoffs out of the way (Oh yeah, the St. Louis Blues are NHL Champs!), we move to that part of the year where baseball reigns supreme.

So “without further gilding of the lilly and with no more adieu,” we bring you this week’s So…This Happened.

1. The Toronto Raptors Are Your NBA Champs

What started out looking like The Klay Thompson Game morphed into the Lowry-Siakam-VanVleet Game. Klay “His Mama Call Him Klay Imma Gonna Call Him Klay” Thompson was on fire and went off for 30 points until he was injured, in what turned out to be a torn ACL. Without Durant – who tore his achilles in the last game – or Klay, and with Boogie Cousins returning from his own achilles injury, Golden State valiantly fought, but they didn’t have enough to hold off a well-balanced tough-as-nails Raptors team.

Looking back, this was an impressive job by Raptors management and GM, Masai Ujiri, putting this team together. Drafting Pascal Siakam and picking up Fred VanVleet. Having the balls to fire the Coach of The Year and then to trade their franchise guy, Dermar Derozan, for Kawhi Leonard. Bulking up the center position with Serge Ibaka and Marc Gasol. Developing a great defense, built around two GREAT two-way players in Kawhi and Siakam, a sturdy PG in Lowry, and those centers on the back-line.

Sure, Golden State got badly banged up, losing Durant and Klay Thompson. But these Raptors played a heck of an NBA Finals and are deserving NBA Champs.

Their leader, the stoic Kawhi Leonard, even expressed some emotion!

Just kidding, they actually do express emotion. Like here, where Kawhi and Kyle Lowry share a moment with the Finals MVP trophy:

Just did a really cool interview with Kawhi and Kyle Lowry, about how they got here and everything this title means, and here’s what happened before we even started rolling. Special. pic.twitter.com/jpZIBJlxdI

So Canada gets its very first NBA title. The franchise that gave us Vince Carter, T-Mac, Damon Stoudemire, and Chris Bosh now has a its first championship.

For the rest of this, we don’t have a championship. But thank God, there is this:

2.  The US Women’s National Soccer Team Opens The World Cup With a Historically Dominating and Controversial (?) Victory

The US Women’s National Team opened up the World Cup with a 13-0 (yes, you read that right) win over Thailand.  Striker, Alex Morgan, scored 5 goals. The best national soccer team in the world crushed it.

And yet there was still controversy.

Some complained that they were running up the score and that their celebrating their world cup goals with that lopsided a score wasn’t “sporting.”

For all that have issue with many goals: for some players this is there first World Cup goal, and they should be excited. Imagine it being you out there.This is your dream of playing and then scoring in a World Cup. Celebrate.Would you tell a men’s team to not score or celebrate?

Still others complained that Megan Rapinoe – who kneels for the national anthem in protest – didn’t sign the national anthem. We were unaware that was a requirement for professional athletes. (And perhaps instead of student-athletes, we should start referring to amateir athletes as singer-athletes?).

Jemele Hill said it best: “You’re not required to sing the national anthem. The fact that she is playing for a country whose administration would prefer she didn’t exist, says she’s a bigger patriot than you or me.”

Let’s see:
1) She is not paid as much as her male counterparts, despite being better, and far more popular than the men’s team

2) This administration banned pride flags at US embassies, which the Vice President said was the “right decision.”

Can you blame her? https://t.co/ZIW7zJuWwh

3. Move Out The Way: Baseball is King

And then one remained: Baseball ⚾️ pic.twitter.com/9ksCQT6NoF

Facebook8Tweet4PinEmailShares12
wpDiscuz
0
0
Would love your thoughts, please comment.x
()
x
| Reply
Share this ArticleLike this article? Email it to a friend!
Email sent!