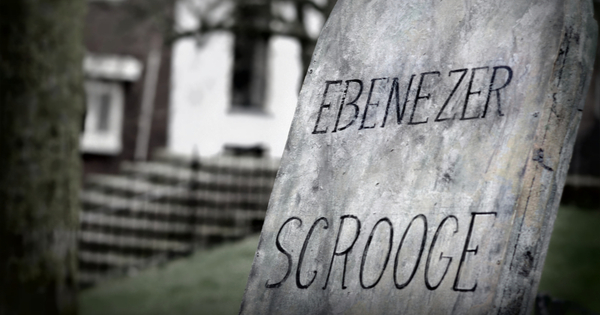 Several years ago, I went to an off-off-Broadway production of A Christmas Carol. Perhaps it was the limited set, the inexperienced actors, or the fact that I was feeling a bit pessimistic about life at the moment, but whatever the cause, my mind wandered away from the stage and I found myself pondering the age-old question: can a leopard change his spots?

In this case, I seriously doubted that Scrooge, a life-long miser, someone harboring bitterness toward all mankind, could be transformed, in one night’s time, into a benevolent, loving, and empathic mensch. Despite the fright (and insight) bestowed upon him by Jacob Marley and the three spirits, I thought Ebenezer needed much more mind-wiring to stave off a relapse. And so I decided to give it to him, on paper, first writing a short story—Scrooge in Psychotherapy—and then adapting it into a full-length play with the help of writing partner Jack Gwaltney. 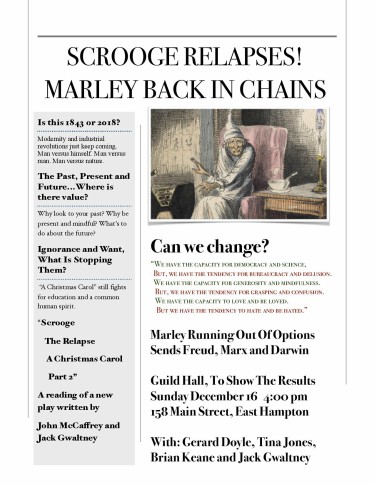 In creating the play, Jack and I aim to honor Dickens’ original masterpiece, but also to satirize it. We’re not saying Dickens was wrong to have Scrooge be reborn, but he wrote this in the mid 1800s, when extremely different challenges were facing an extremely different society, and the message needed by readers then is not exactly the one readers need now. So Jack and I are trotting out three new spirits to take on Scrooge’s issues—Sigmund Freud, Karl Marx, and Charles Darwin—with the hope they can duplicate the transformative work of their ghoulish predecessors, but in a way that resonates more closely with modern audiences.

And in a way that will last. While emotional epiphanies like the one Scrooge experienced can and do serve as powerful agents of change, I believe these “snap-shots” of clarity might best be perceived as the starting gate rather than the finish line.  Jason Kurtz, my go-to-guy for questions regarding the human psyche, a renascence man who is a working psychoanalyst, a published author, and a rising playwright, who’s new award-winning production, “Tell Me Your Crazy,” presents a  uniquely humorous and serious take on therapy and relationships, backs up my contention.

Scrooge was given a powerful insight into his own behavior and its consequences, but putting this revelation into practice would take daily work.  Every time he felt the urge to be miserly or cruel, he would have to check himself and fight to maintain his new generous attitude.  Only over time, would generosity become natural and automatic.  It is no different for us today.  Our mental habits have been formed over a lifetime of day-to-day choices, and while the insights of therapy can reveal to us how we act in ways that are detrimental to ourselves, these unhealthy patterns are only changed through vigilance and daily work.

Further affirming the idea that “Rome Wasn’t Built in a Day,” or for this argument, a few sessions, is the following data posted by the American Psychological Association:

My point is it takes time and persistence, effort and fortitude, courage and patience, to change ingrained attitudes and longstanding behaviors, to identify the root causes of painful emotions, and to build the skills to not only overcome them in the present but to not let them overwhelm in the future.  I’m always reminded in this regard to the penultimate scene in the film Good Will Hunting, when Matt Damon’s character “Will” finally lets go of resistance in therapy, breaking down when Robin Williams, playing the analyst, helps him see that the violence and abuse he suffered as a child was not his fault.  It’s a powerful moment, and Will, understandably, feels clearer and lighter and more hopeful about the future, deciding to leave Boston and drive cross-country to rekindle his love relationship with “Skylar” (Minnie Driver).

It’s a happy, Hollywood-style ending, but I always wonder if Will’s good feeling and resolve might wane by the time he reaches California and that his issues of trust and abandonment might resurface and threaten the relationship. But that’s another movie…or is it just real life?

Excellent article. What a fun way to think about the issue of how people really confront their bad habits and change.

Facebook30Tweet9Pin2EmailShares41
wpDiscuz
2
0
Would love your thoughts, please comment.x
()
x
| Reply
Share this ArticleLike this article? Email it to a friend!
Email sent!