Get Daily Email
Join/Login CLOSE
Home / Featured Content / The Great Barrier Reef Has Been Bleaching for at Least 400 Years, but It’s Getting Worse 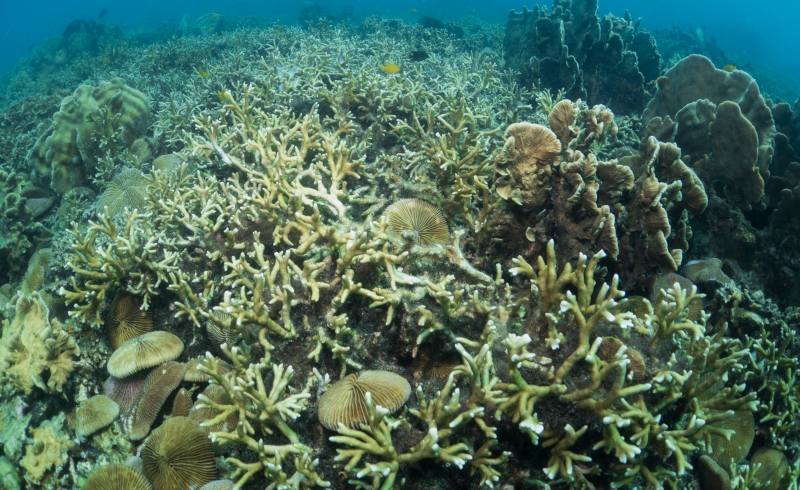 Australia’s Great Barrier Reef made headlines in 2016 for all the wrong reasons. Part of the world’s largest coral reef had been turned almost white by warm seas and other stressors. The shocking sight drew worldwide attention to the process of coral “bleaching”.

Bleaching occurs when water temperatures and other stressors are too extreme and disrupt the symbiotic relationship between the coral and the single-celled colourful algae which live inside them, causing the algae to be expelled and the white coral skeleton to become visible. Coral – technically an animal not a plant – can survive bleaching, but it is a sign of extreme stress and in the worst cases bleaching can cause the catastrophic loss of large areas of coral reefs.

This is what happened with the Great Barrier Reef in 1998, 2002, 2016 and 2017. We know about those recent events as they have been widely observed and studied, but prior to the 1970s we have little understanding of coral bleaching due to scant observational records. This could mean that bleaching didn’t happen, happened very infrequently, that we didn’t know how to recognise it, or that we were not looking for it in the right places.

To better assess the survival chances of the Great Barrier and other coral reefs, we wanted longer-term records to help us understand how and why coral reefs end up bleaching in response to environmental change over the centuries. This in turn would give us a better sense of their ability to cope with recent rapid changes.

Fortunately for us, coral colonies can live for hundreds of years keeping very good archives of their environment during that time. This is because, like trees, they have annual growth bands. The width, density and chemistry of the bands provides information on past growth rates, sea temperature and runoff from land during storms. To access those bands, scientists can drill out a long and thin “core”, removing a part of the skeleton without killing the coral itself. These cores can then be X–rayed or chemically analysed to understand the history of the coral – and its environment.

The Great Barrier Reef benefits from a wealth of cores extracted by scientists over the past four decades, giving a unique opportunity to understand patterns in past growth and bleaching, which can be identified from groups of successively very small bands in the coral skeleton. This new approach to reconstructing bleaching has allowed us to look back beyond the observational record, to reconstruct 400 years of bleaching along the Great Barrier Reef.

We found that widespread bleaching had been occurring there since at least the 1600s. However, there has been a 10% increase in the proportion of corals affected since the late 1700s. Centuries ago, widespread bleaching was probably caused primarily by fluctuations in temperature. More recently, warm oceans have likely been compounded by other, human-induced, stressors including pollution or sediment and fertilisers washed into the ocean.

Over the past 400 years, the time span covered by our cores, Great Barrier Reef corals have shown evidence that they can recover from widespread bleaching events. However, since the 1800s, both the number of such events and the number of corals involved have increased, indicating they may not be able to cope well with sustained increases in temperature, and are possibly reaching a tipping point. Future studies would benefit from longer cores, allowing us to look further back in time.

Importantly, this 400-year record now allows us to identify that corals are moving out of a period during which they could cope with environmental change into one where they appear to be increasingly struggling. In the face of rapid and complex environmental change, coral reefs are not certain to survive.