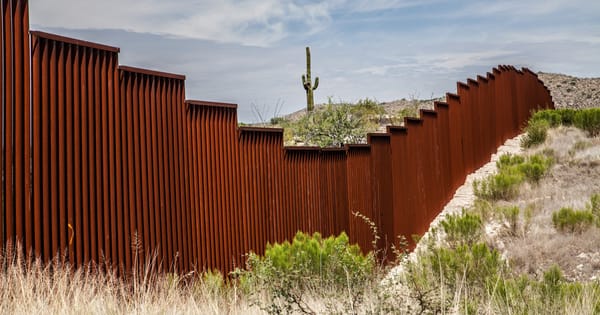 My favorite album of all time is Pink Floyd’s The Wall. It should be re-released given the current (manufactured) crisis. I’m not surprised that Roger Waters is planning a show on the border to protest Trump’s continued government shutdown over funding for an ill-defined barrier that has come to represent everything wrong with his presidency: lies, false promises, fear, racism, and simplistic solutions.

Oh, and did I mention the worst aspects of masculinity personified in one human being?

It’s important to emphasize that the wall is more symbol than reality. Setting aside the fact that the nearly-2,000-mile border is already teeming with armed men and barriers of various kinds, a Trumpian “wall” already exists: the (abstract) wall that blocks many Americans from seeing migrants from Central America and Mexico as people just like them.

While Trump was rightly condemned for misappropriating the Game of Thrones slogan “Winter Is Coming” by taking the font and changing it to “The Wall Is Coming,” the underlying analogy is eerily correct. Although — spoiler alert — the (mythical) wall is destroyed by undead invaders (who only advance during winter) at the end of the show’s last season, for thousands of years it served to separate the living not only from the undead but also from each other. In a reversal of reality, those living south of the wall disparaged the northerners as “wildlings,” portraying them as amoral, violent, and uncivilized, while the northerners denounced their southern brethren for their cloistered arrogance. Sound familiar?

The silver lining from Game of Thrones is that the north and south eventually (sort of) united against the undead, and, in return for their help in the war to come, the “wildlings” were permitted to settle south of the wall for safety. It remains to be seen (in season 8) whether this united force will prevail, but the mythical universe has nevertheless solved a timeless problem that those of us stuck here in reality are still struggling with: xenophobic nativism.

Somehow it remains lost to millions of (especially) white Americans — even in the 21st century with all its forward-thinking innovations and popular culture — that their southern neighbors are not dangerous invaders but people with largely the same feelings, needs, and aspirations that they themselves possess. Meanwhile, it remains lost on many Israelis and American supporters of Israel (not to mention Trump) that the so-called “security fence” that illegally snakes through Palestinian land is not only hideous (I’ve seen it up close) but far more of a barrier to peace than to terrorism.

Walls have been built for millennia, most notably the Great Wall of China, with discouraging results. To conclude that this (still) nonexistent wall that Mexico will surely not pay for will be any different is just as absurd as concluding that the ascension of an unqualified, hate- and fear-mongering narcissist to the highest office in the land would be a reason to celebrate. It is as if we have learned nothing from history and have forgotten how to think (critically).

If a television show can get it right, then why can’t we?