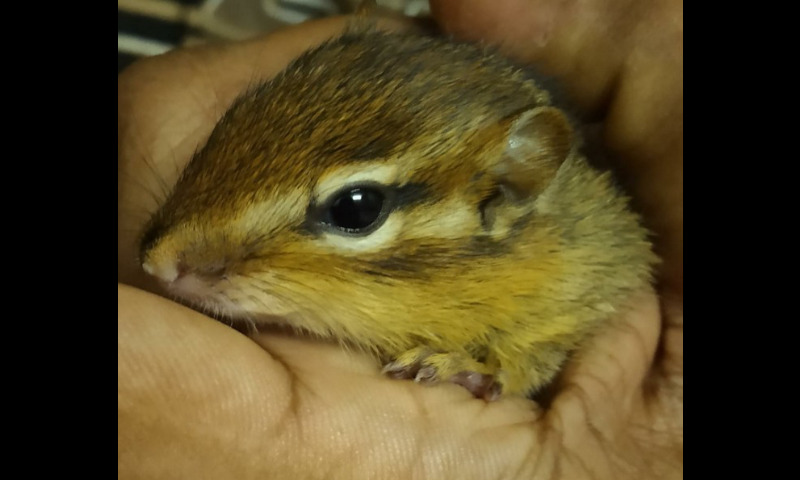 Fall was fast approaching and the ground was still green with a few patches of golden leaves. My husband was mowing the lawn and collecting them into bags. I was cooking in the kitchen, and watching intently. We have quite a few small critters in our backyard, especially tiny frogs that are prone to get crushed under the noisy garden tools, and the Big Friendly Giant.

Calculating every footprint on the ground, my husband spotted a not-so-bushy tail popping up and down, almost camouflaged by the leaves. Soon it was dusk. He seemed tinier than the other chipmunks around and all alone. Closer inspection confirmed it was a baby chipmunk, with his eyes still closed. The curious fluffball had wandered quite far away from his burrow taking adamant baby steps in the dark.

My husband picked the tired, yet determined creature. His tiny delicate body, shivering, and longing for mommy’s warmth. He jumped into my husband’s big, warm hands, which when he closed gently, provided the perfect warm burrow. After having warmed him to room temperature, he made some puppy formula and fed the famished baby with a syringe. The little critter adjusted to the new plastic tube in no time. He suckled hard and rested.

My caring life-partner read everything he could on feeding chipmunks and raising them without their mother back into the wild. And, he even set an alarm to feed the baby every two hours.

The incident brought back sleepless nights when I used to breastfeed my babies, without an alarm of course, and he would still be sleeping. “You’re the one with the breastfeeding device, not I”, said he, when I argued I had to stay the nights awake alone.

After a tired, strange, and rather extra-ordinary night for all of us, our curious boy wanted to head back with eyes closed to continue his search for mom and home with the first rays of the sun. We were awakened by his loud stubborn calls for freedom.

We let him out and followed him around to keep him safe from other predators in the yard. He carefully smelled each chipmunk burrow entrance to detect any familiarity.

No mother, but he had found another friend, eyes open, and almost as big as he was. This one had a tiny bruise on his nose as another territorial chipmunk had smacked at him.

He was vulnerable and unafraid of us. My husband extended his hand, which he willingly climbed on. We grew from a family of four to a family of six overnight. Our new members loved to drink puppy formula every two hours, and the man of the house was their mother.

The second night, at 3 am, the chipmunk with eyes closed saw the world for the first time. Those two tiny curious dots were smiling at us. The moment they were open, our little one would not stay in place and went around exploring the room. We named him Scamper, and his friend Sprinkles.

We do not know if Scamper and Sprinkles were related. They slept well with each other and kept each other company while learning to survive with a mom who did not look like themselves. Sprinkles had more experience of living in the wild and taught his companion what he knew.

We did not cage them. Our intention was to release them into the wild in our own backyard. In order to learn to survive the winter, they would need to spend as much time outdoors, exploring other similar species.

To be or not to be

Each day each of us would take turns to leave Sprinkles and Scamper in the yard and follow from a safe distance. The older chipmunks would often fight with them saving their territory.

We provided the two with a birdhouse with a hole in it as their home. Slowly and steadily, the two collected twigs, weed fabric, and other furry things to make this house their home. They no longer wanted to come inside at nighttime, but we took them in any way. We had owls in the backyard who would really enjoy an easy treat.

On day seven of their stay with us, our new babies would watch us from a distance. The two had different personalities and wanted to dig different dungeons.

One day, Sprinkles found a whole basket of peeled peanuts in the house. He started holding and peeling the shells like a real chipmunk.

“He is ready to leave home”, said my husband. But as the weaker parent of the two, I did not want to let go. We provided him with a whole peanut, which he rightfully peeled in no time, consuming all contents.

No one had to teach them to dig, eat or collect material to build their homes. They had enemies and had no time to lose to learn. I was fascinated by their agility and ability to learn just by watching their foes. More exposure to the wild kingdom made them wary of us.

After more than a week of protected exposure, they no longer wanted to come home. Occasionally, they would still climb onto our shoulders, or lovingly nibble a finger, but their strong mother, my husband asked us to not interfere with their adaption.

The babies acted like small mature adults. They still showed up in the sunroom, where my husband worked from home, to gather their occasional milk- treat. He was the only one they still continued to trust, for the longest time, but also from a distance. I was heartbroken that the critters had all of a sudden, changed their attitude of complete dependency to wariness.

“They need to see us as strangers. There are many humans who would hurt them”, my husband explained. That was true, but I wanted to keep the kids close, for as long as I could.

Derive life-lessons from things both big and small

When I was working with a wildlife rehabilitator to learn more about rescuing small critters like squirrels and chipmunks in the wild, he recommended keeping them caged for five weeks at least, before the animals could be released in the wild.

These two impatient, yet intelligent creatures had succumbed to the fact that they would need to work overtime if they were to survive winter in western New York. And they did just that.

They lived under our deck and came out in the snowstorm to feast on the peanuts we diligently filled in the first home we provided them. Perhaps, they did not know they needed to hibernate! They came up to the door to collect treats. They were the only chipmunks we would see throughout winter. But they were safe, they were there, they showed up to prove it.

There are no co-incidences

It’s now been a year since nature gifted us these critters. The experience of having them made us appreciate the trust that these they entrusted to us. Their intelligence to step up to the situation and learn fast, in contrast to our human children – was exceptional and essential to survival in the wild.

I did know that my husband was a lover of animals. I did not know that we shared a love to rehabilitate them. As a child, my garden in India provided me with several opportunities to care for many wild animals. I grew up with them. They helped me be the person I am today.

The tolerance towards these wild animals was not a pre-requisite for our relationship, but it was a pleasant surprise to just have one more thing in common.

Today, it’s been more than a year since my husband has been acting as the man and woman of the house for our children. I came to Germany as a volunteer worker and wanted to bring the kids over as soon as possible. This was not possible due to the pandemic. I remain separated from my family but in the protection of my mother and step-father — — who too has had to step up and make many sacrifices to fit into this beautiful role.

The dad of my kids now works, cooks, and cares, as the perfect parent to his three children and the feral kittens who were left under our deck, shortly after I left for Germany. Their presence has helped them cope up with some unplanned events.

I used to watch dogs when I was with them. They are still welcome at our home filled with love. My husband who has enough love cares for them all.

Sprinkles and Scamper helped bring out the caring qualities, which I believe are present in every man. One just needs the correct time and opportunity to bring these attributes to the forefront and utlize them. Not every man does this, but I am lucky to have two such men in my life.

Shireen is an avid writer, budding Opera singer, apprentice nurse, dog sitter, dog walker, walker…. Jack of all trades and master of one - Mother to two children aged 8 and 10!