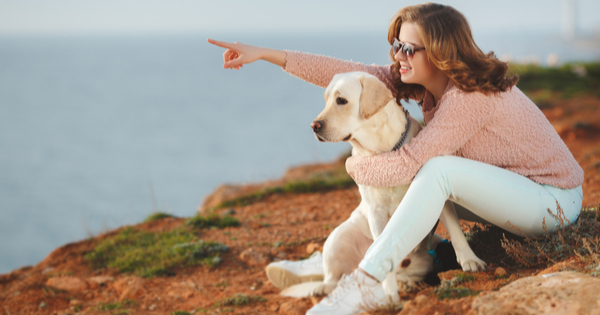 When you really want something, the universe always conspires in your favour.

And have no problem putting the hard work in, day in and day out, to do so. But what about when we hit a roadblock—that has nothing to do with us or our efforts?

Well, we may need to think again—because that roadblock probably does have something to do with us. How we got there, how we feel when we hit the roadblock, and how we choose to respond not only matters, it’s also quite likely an important part of the journey.

One of my life dreams was to go on a big road trip through the Western States. The idea of hitting the road for a few months had been rattling around in my heart, mind and soul for decades. By January 2018, all the logistical stars had aligned—sold my house, put my belongings in storage, found the money, mustered up the courage, quelled the fears and planned the trip—and the day came when I loaded my beloved old retriever, Sadie, into my beloved old CRV and hit the road, heading south from Canada…the proverbial wind in our hair and fur.

We got as far as the U.S. border…an hour down the road.

What you still need to know is this: before a dream is realized, the Soul of the World tests everything that was learned along the way. It does this not because it is evil, but so that we can, in addition to realizing our dreams, master the lessons we’ve learned as we’ve moved toward that dream. That’s the point at which most people give up.

The conversation with the Border Guard (the second one, inside the building…gulp) from Homeland Security went a little like this:

HIM: How long will you be in the United States, Ma’am?

HIM: And how do I know you will return to Canada in three months?

ME (not so excited): Uhhh…because …uh, I like Canada?

HIM (frowning): Can you provide me with written confirmation of any obligations—work, house, family—that indicate you will, in fact, be returning to Canada in three months?

HIM: Ma’am…I believe I just told you what I’m looking for.

ME: But, but…I sold my house, my stuff is in storage, I’m single, I don’t have a husband or kids, I don’t know where I’m going to live when I come back to Canada, and I don’t have a job to return to…at least not the kind that I can provide any written documentation about.

(I gotta admit the look on his face was priceless…as in “Clearly, this woman isn’t smart enough to be lying to me.”)

HIM (scratches his head): Okay, Ma’am, let’s try this…are you able to provide me with any proof of where you will be staying during your three months in the States? And even better, confirmation on when you’ll be leaving?

(Which is when the lightbulb in my wee brain went on and my face lit up like a Christmas tree.)

(I then proceeded to scroll through my entire “Travel 2018” file in my gmail account, enthusiastically flashing him multiple written confirmations of where I would be staying and when, including a reservation for a hotel at the very end of my trip, close to the US/Canada border. And while I was proudly showing him all sorts of reservation confirmations, I actually came across an e-mail (from myself to a VRBO owner) that said, clear as day: “I am a writer from Canada who will be on a 3-month writing road trip with my dog…”)

(I turned my phone around again and held it right up close to his face, so he could see it. He read it and gave a curt nod. Then, without a word, he filled out a piece of small slip of paper. I held my breath. Then he typed something into the computer then handed me the piece of paper.)

(I’ll spare you the details but the long and short of it was this: that slip of paper was some sort of temporary visa that had a date on it—exactly three months in the future. So when I returned to Canada, as I promised, the Canadian Customs & Immigration officer would take that slip of paper and return it to U.S. Homeland Security. In other words, unless I wanted trouble traveling to the States on future trips, I had BETTER be out of the U.S. by that date.)

Then I took my piece of paper and passport, jumped in our CRV and Sadie and I hightailed it out of the parking lot and headed south before they could change their minds.

Making a decision was only the beginning of things. When someone makes a decision, he is really diving into a strong current that will carry him to places he had never dreamed of when he first made the decision.

And let me tell you, that current certainly did take us to places I’d never dreamed of when I first made the decision to go on that road trip. In fact, those three months on the road with Sadie was one of the highlights of my life. It boggles my mind to think it nearly didn’t happen.

But it did…maybe because the Universe really was conspiring with me that day, and always, to do whatever it can to help make a dream become reality.