Get Daily Email
Join/Login CLOSE
Home / Featured Content / Why Do We Care When Men Hold Hands? 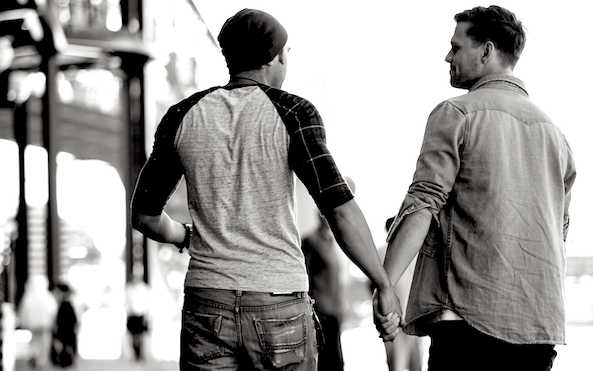 During Pride Month, every June, an incident in Europe that whipped up a media frenzy re-enters conversations. For those who don’t recall: International headlines a few years ago boldly celebrated that thousands of Dutch men were holding hands. The men—a majority of them straight—had done so in Amsterdam and other cities in response to a gay couple’s brutal attack in Arnhem, Netherlands. The gay victims were attacked for holding hands themselves.

When I first saw this, I admit I was bothered. As a gay man, I appreciate the gesture. I don’t denigrate the men who stood hand in hand as a display of solidarity. What’s upsetting is that it was remarkable at all.

That straight men holding hands makes the news speaks to a problem larger than gay bashing.

In Western culture, when men hold hands—gay or straight—it matters to us. We’re all complicit in teaching that it matters. It’s what most of us were taught. It starts young.

In a diverse range of schools over twelve years, I taught in Kindergarten and first grade classrooms. I frequently observed five and six year-old boys hug, hold hands, sometimes kiss other boys. This was true across class, race, religion and ethnicity. Dads during drop off and pick up—a still far-too-infrequent occurrence—held their boys’ hands, hugged and kissed them too. Just as frequently, in fourth and fifth grade hallways boys quickly defended touching each other at all with the qualifier “No homo.”

Boys aren’t born blue-clad with arms tight at their sides. We do this to boys. They learn, as we learned, just like any bias that sticks. They grow into preteens, high schoolers and men who are compelled to believe their simple human nature is not acceptable. So unacceptable that some men turn to violence to prove it.

In 2008, two Ecuadorian men were attacked in Brooklyn by other men wielding glass bottles and a baseball bat. The two men had been walking home from a bar one December night, arm in arm, trying to stay warm. The attackers yelled anti-Hispanic and anti-gay slurs at the two men—the latter clearly suggesting they were mistaken as a couple. In fact, they were brothers. One of them was beat to death. Just the perception of gayness caused by them touching contributed to the end of a man’s life.

One of the victims in The Netherlands attack commented afterward that he and his boyfriend rarely hold hands in public unless they’re alone. This line of thinking is not uncommon among gay men.

In the past fifteen years, I’ve lived in New York and San Francisco—two U.S. cities where LGBTQ people have flocked for decades. Yet, I’ve repeatedly observed male couples drop held hands when they noticed they’re being noticed. I’ve done the same with my own boyfriend.

While holding hands with another man, we’ve been screamed at from blocks away by pedestrians and passing cars, had glass bottles thrown at us mid-day, and physically threatened multiple times—once on the same street as the historic Stonewall Inn.

We were lucky. The bottles didn’t hit us, assaults weren’t carried out, and the ones yelling passed us by. Still, each time it happens, the body’s fight or flight instinct kicks in. What happened to the Dutch couple confirms the fear that makes this so. It’s a natural response to threat. Whether we stand our ground, girded for fight, or flee, is irrelevant. What matters is the instinct is triggered at all for a touch as innocent as hand-holding.

Hand-holding is a casual intimacy straight couples can easily take for granted.

So I propose a different statement of solidarity. Let’s pocket our hands for a while. We could call it “A Day Without Touching.” One of our most primal instincts—simple touch—is disallowed for the day. Walk empty-handed in public. Straight couples, in particular, imagine being fearful when you feel like reaching for each other.

On that day, let’s pay close attention to why we pay attention. This enduring legacy of masculinity that tells us men shouldn’t hold hands—what makes it noteworthy—is unnecessary and, frankly, sad. Upon reflection, maybe we’ll start to raise and treat our boys differently.

When boys go from five year-olds to fifteen to forty-five and comfortably show affection between them—straight or gay, holding hands or something else harmless and inoffensive—maybe we won’t do a double-take when we observe it.

In the eyes of some people, gay men are inherently un-manly. Or, they’re not men at all. It’s unfortunate, but gay men making the measured choice to hold hands in public—knowing attacks for doing so exist—still takes bravery. Ironically, it’s bravery that is meant when someone demands – “be a man.”

Kevin is a freelance writer, writing coach, and contributing editor for Good Men Project, with a focus on social justice and queer issues. A former teacher, he also works with college students training to be educators. Other writing has appeared in The Washington Post, Fast Company, Huffington Post, American Chordata, Litro Magazine, Thought Catalog, Thrive Global and Elephant Journal, among others. His Good Men Project article, "A Boyhood Brush With Breast Cancer," was a finalist for Sequestrum Literary Journal's 2019 Editor's Reprint Award. He lives in Barcelona, Spain. kevinewood.me @simplifythenow

It is taught in childhood, Through-out Elementary school the Man box inexorably descends on boys Narrowing their channels of emotional expression. Separating them into smaller and smaller easily controlled groups, Prepared for societies choice of roles for them portray the nerd, punk, thug, druggie, provider, warrior, enforcer, convict…….Yet almost all enforced by the whims others that want something from them…..instead of wanting something for them. We need to do better than break them and then complain about the problems broken men cause. Maybe just letting men have a wider range of emotional expression without dropping the shame hammer on them…..… Read more »

Bravo to the men who fight against homophobia!

I live in Hell’s Kitchen where it is relatively commonplace to see young men holding hands. I smile when I see it, remembering the day when it was a rare occurrence and consider just how taboo it is in almost everywhere else in America. You’re absolutely right. It starts in the home and in the classroom. I think you’re onto something in terms of making hetero couples aware of the proscription. It’s a good place to start

Facebook287TweetPinEmail1Shares288
wpDiscuz
3
0
Would love your thoughts, please comment.x
()
x
| Reply
Share this ArticleLike this article? Email it to a friend!
Email sent!