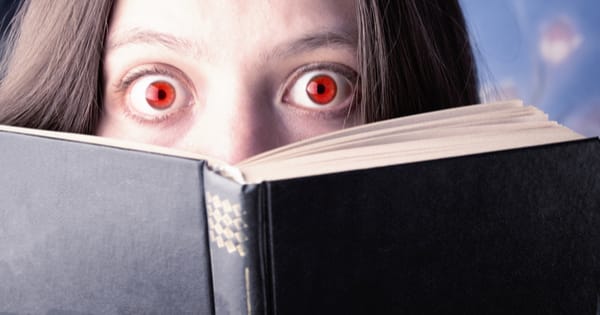 One night, as I crawled into bed with a cup of tea and The Bazaar of Bad Dreams, my latest read from my #onetruelove Stephen King, I had not only a wonderful sense of anticipation but also of serenity. There are very few things in this world you can count on, but for me, Stephen King is near top of the list; certainly he ranks above death and taxes. I have often described the experience of reading his books thusly: it is like going on the perfect vacation with the perfect companion; someone who understands my every mood and craving and is always entirely in sync with what I want to do, where I want to go and when I want to do all of these things.

As I was reading his introduction, I found myself daydreaming about our past history and the many good times we have shared together. This walk down memory lane prompted me to recall our auspicious introduction: Thanksgiving weekend, 1979. Visiting my grandparents for the holiday, the adults safely ensconced in the dining room with drinks and cards, my younger sister and I dared to do something we NEVER would have tried at home (or gotten away with, for that matter)…we tuned in to the premiere of the unforgettable miniseries, “Salem’s Lot”.  I urge you to GO WATCH NOW if you haven’t before you continue reading.

Of course, I had some awareness of King before that moment, due mainly to a contraband, dog-eared copy of The Shining that had made its way around the neighborhood; but I was not a “rule-breaker”  and the consequences of being caught with such a thing would have been too great to risk.  Still, my sister and I huddled in front of the TV that weekend, betting the grown-ups would be only too glad to have us entertained and out of their hair; not only did that bet pay off, but a lifelong love affair began. For those of you who would now like to argue about how dated the miniseries has become, or the unworthiness of David Soul in the lead, I have but one response: any form of entertainment that involves both James Mason and James at 16 is beyond reproach. ‘Nuff said.

Upon returning home from that fateful trip, I secured a copy of the novel post-haste and read it as eagerly as one would a secret diary–a glimpse into the mind of this man who seemed to understand me so well. I was not disappointed (that book remains a favorite to this day) and of course I was impatient for more…in retrospect I realize it was my “gateway drug” to much harder stuff, not only by King but other writers who like to explore the twists and turns of both the human psyche and soul.

Speaking of other writers, I call Stephen King my favorite “undead” author because a) it’s funny and b) there has been one other who captured my heart and imagination with an even slightly more hypnotic pull: the late, great Dame Iris Murdoch. Alas, she is no longer undead and therefore no longer working, so Uncle Stevie has taken the crown. To anyone who is thinking that they are so dissimilar as to compare apples to oranges, I beg to differ: in my opinion, not only do both feel comfortable exploring the ramifications of the darker aspects of the human condition, they are also both incredibly compassionate about the turmoil we all encounter in our quest to be “good”. They seem to understand what “struggling with your inner demons” is all about, even if for King it is expressed more metaphorically than in Murdoch’s work.

People who only know Stephen King by reputation are always amazed when I describe him as an author with great hope. I think it is a function of his uncanny ability to shine a light into the darkest of dark corners and confront what he finds, come what may. He is still standing in spite of it—probably because of it—and is so obviously pleased to share what he has learned with his devoted fans. Stephen King is delighted to entertain us; who could ask for anything more?

I suppose any ode to a writer as prolific as King should include a guide to the best of his best in order to tempt the uninitiated. I am rolling my eyes as I type that, because to me he is one of those authors who either attracts you like a magnet or is best left alone. Does he have books that I consider “stinkers”? You bet; he wouldn’t be the inexhaustible creator he is if he felt the need to be “perfect” every time. And with a writer as gifted and thoughtful as he is, I have to imagine that my trash is undoubtedly another reader’s treasure. How ANY book impacts you has a lot to do with what you are bringing to the table at any given time; something that strikes you as profound at 20 may seem silly at 40, and vice versa.

But generally speaking, to pick favorites amongst King’s books is akin to picking favorites amongst friends…possible, but not really material. However, as I began with ‘Salem’s Lot, it might be a good choice for you. A mythic “boy who cried wolf” theme, the somber precursor to the enchanting “Fright Night”–what would you do if a vampire moved to your neighborhood? King expands on the concept of children-seeing-the-truth-adults-cannot-accept in IT, a brilliant, epic, can’t-put-down read. His opus, however, is most likely The Stand, a sprawling post-apocalyptic tale that has been imitated ad naseum, but never rivaled.

Of his more recent work, I adored 11/22/63 and Joyland, the former being an incomparable treatise on the dangers of woulda-coulda-shoulda and the latter being a joy ride, pure and simple.  His fun and short novella Gwendy’s Button Box breaks the spell of his seeming inability to write a believable female lead;  Sleeping Beauties, co-written with his undeniably more talented son, is a feminist manifesto that you cannot put down.

We all need rewards that truly motivate us, something to look forward to…for me, just knowing that another Stephen King book is somewhere on the horizon does it. May my bookshelves forever be clogged with his offerings, because at the end of the day it is one of very few relationships that I have gotten much more out of than I have put into it.