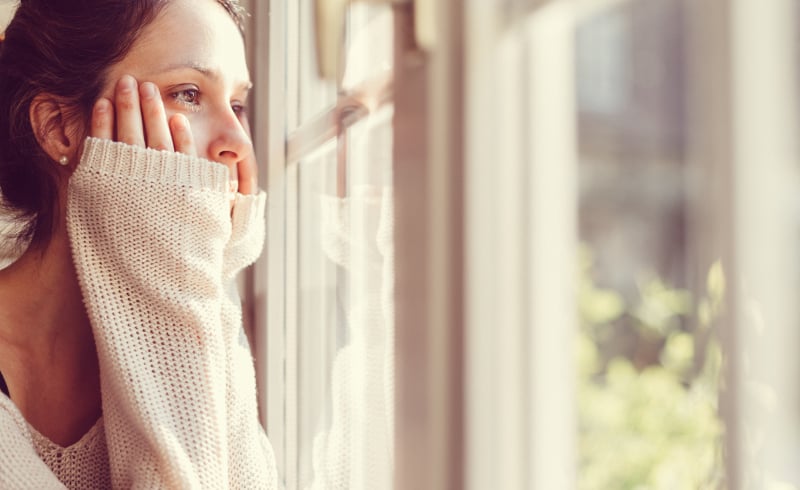 When a man does you the courtesy of actually breaking up with you, for the love of all things, please just believe him.

He didn’t ghost on you. He respected you.

Ladies, and you know who you are…

He showed up. He looked you in the eye and he ended it. He was nice about it, maybe even sweet. No naming. No blaming.

Maybe he told you it’s him. He’s going into a busy time and just can’t give you or the relationship the time you deserve.

He might have said that he realized that he’s just not ready for something serious and he can tell that you are.

Whatever his reasons, whatever his word choice, you have got to believe him.

You have to believe the man who is looking you in the eye and breaking your heart.

Don’t question him, over-analyze, or decide to “be patient and wait.”

I know men can get caught in this trap, too, when their relationships end, but I am getting letter after letter from women all asking the same questions:

Yes, People End Relationships When They Are Still in Love

It happens all the time. You see, being in love is a feeling. You get to have it, experience it, and enjoy it.

Loving, though, is a verb.

It’s an action. It’s work. It requires time, energy, focus, and attention. For relationships to work, both people have to be ready to do that work, to put that feeling into action, at the same time.

For some, that feeling can come at a really inconvenient time. It doesn’t always wait until everyone is ready with all of their ducks in a row. It can come too soon after a breakup, during a big life transition, or before someone is ready to make a real commitment.

People can be in love but not capable of putting that love into action by entering a relationship.

I get it. You’re hurt. Confused. It feels like you’ve been played. If he knew he wasn’t ready for something serious, why did he ask you out in the first place?

Was he just trying to hook up? Was everything a lie?

You may have, in fact, been played but it’s also possible that you weren’t. You see, when it comes to feelings, people make mistakes and create stories all the time.

They think their feelings can be controlled.

They go into something knowing they aren’t ready for something serious. They may even say as much to you. Then, without warning, love hits them like a Mack truck, right between the eyes and they aren’t prepared for that. They thought they could keep the reigns on something, just have some fun, and prevent anything from becoming too serious.

Love doesn’t work that way, though. It’s unruly, unpredictable, and difficult to control.

Yes, some people are just players but for some, they really believed they had it all under control. They didn’t plan on feeling more than they were ready to deal with but it happens and suddenly, they are in an awful position of breaking your heart.

They’re not ready but really want to be.

I lived this. It was a lifetime ago but I can still feel that love like it was yesterday.

I know the intensity that keeps you standing still and waiting. I lived it and I, too, had to learn from it.

There was a man who really loved me. He just wasn’t capable of showing up for that love. He had his darkness, his pain, and his demons. They prevented him from being able to get and stay close to me.

Every time we got close, he ran. I was consumed by that closeness so I would wait. He’d come back, looking almost tortured. He was crying when he said he loved me and I believed him. The intimacy would scare him and he’d leave again.

Yes, he loved me. He wanted to stay. He wanted to be the man who stayed but he wasn’t ready for the vulnerability that comes with staying.

I hold those truths equally: He loved me and he wasn’t capable of loving me in the way that I deserved or that he wished he could. I needed to let go, even though I knew we loved each other deeply.

It takes work to be relationship ready.

It just happens that way sometimes. People can think they’ve done the work to be ready for a new love. They believe they have themselves all figured out, that they have conquered their demons, that they are ready for whatever comes next.

It’s not until that theory is tested that they realize that isn’t true. Sometimes it’s not until you’re in it that you realize you aren’t ready for it, that there is more work to be done. They didn’t lie. They didn’t mislead. They just didn’t know.

You can be the right woman, just not right for them.

It’s true. You can have everything going for you, be perfect in so many ways, and still just not be the right combination of everything someone needs.

It’s maddening. It just works that way, sometimes, and it hurts like hell. You have to feel it, though.

You have to go through it before you can move on and get on the other side of it all.

You have to accept it and you have to let him go.

As long as you’re waiting for the person who broke up with you, you’re standing still. You don’t get to find out the ending to your story when you’re stuck being a chapter in his.

All the above is very true and accurate. It actually puzzles us guys sometimes that women just don’t ‘get it’. The fact is that you cannot MAKE anyone either fall in love or be in love with you. All you can do is be yourself and open to someone coming into your life. If a man is telling you that he doesn’t want to be in your life, believe that is exactly what he means. There are zero shades of grey on this, it’s black or white. Respect yourself and back away. So many women think that men don’t know… Read more »

Fantastic article, Heather. Thank you for writing this! Too many times we try to hang on, live in hopeful desperation, and pray things will change. Someone had to speak the truth, and you did.

I’ve heard the same exact thing from woman after woman in that situation. Sometimes, like men, they believe that if they try harder, love harder he’ll come back, but most of the time there is this sense of denial, hopeless hope. Tears me up a bit to have to tell them the reality, but they need to hear it. Only thing worse is being that guy that has to stand there, look into her eyes, and tell her that it’s over. Tear ya up. We are conditioned to not harm women from the day we are born, and here we… Read more »

Great article, My fiancé and I have lived all of those things more than we both we would care to admit over the past three years, but somehow we ended up reconciling after each breakup and now our relationship is stronger than it’s ever been. Falling in love wasn’t the plan when we met and I wasn’t ready for it, not by a long shot. She fell hard and for as much as I wanted to be right there with her, I had my own issues that I had to deal with before I could fall as hard as she… Read more »

FacebookTweetPinEmailShares958
wpDiscuz
4
0
Would love your thoughts, please comment.x
()
x
| Reply
Share this ArticleLike this article? Email it to a friend!
Email sent!