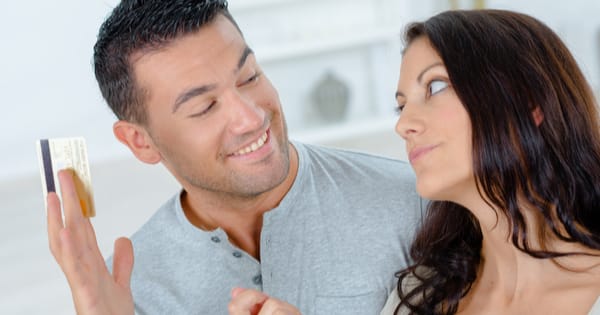 Money and politics are subjects we’re not supposed to talk about, right? But if you want to avoid an unhappy marriage, you have to talk about money.

I realize that’s a bold statement. Numerous studies cite the divorce rates for first marriages in American at around 50%.There has been some debate about that recently. Whatever the percentage, it’s higher than it should be.

To be clear, I’m not a marriage counselor, nor am I trying to be. We’re in serious trouble if that’s the case!

In our marriage of over thirty-five years, I can tell you that some of our biggest challenges have been over money. If you’ve been married for any length of time, I’m sure you can trace some of your more significant disagreements over the topic.

So, how do you talk about money? What do you do when you can’t agree? How do you resolve those issues?

What follows is a framework or formula for communicating that you can use in any area of conflict. It’s very effective when talking about money.

Lest you think I’m cherry-picking, take a look for yourself – what are the top 5 causes of divorce.

Communication – the antidote to an unhappy marriage

Whether it’s in your marriage, your workplace, on social media (don’t get me started), email, or texting, words matter.

The tone of voice matters. My wife, Cathy, and I both have to remind each other of that fact. Both of us are passionate people. Sometimes that passion gets a bit over the top. Okay, if I’m perfectly honest, it happens a lot more than it should. For those keeping score at home, my scorecard on that front is far higher than hers. It’s not even close.

Understanding each other’s passions while showing grace and patience with one another is not something that comes naturally to either of us. Does it for anybody?

There are times when we have to go to neutral corners (metaphorically). That’s something we learned to do over many years. Early in our marriage, we didn’t do that. It’s helped us get through difficult times. When you’re dealing with a son battling addiction, you either learn to communicate or your marriage will likely not survive. By the Grace of God, we learned to do that. Our marriage not only survived but is stronger than ever.

Here are three things we try to do to get through areas of conflict. They apply to money or most any topic.

These three fundamentals form the foundation for the rest of our discussion.

A budget should form the foundation of your financial life.  Operating without a budget is a recipe for problems.

A budget establishes saving and spending levels. It’s a way to keep score reasonably. If the two of you work together to create your budget, both have ownership of the outcomes. If one establishes it and tries convincing the other to agree to it, it can result in resentment.

It took us more years than it should have to figure this one out. We would both say we lived in an unhappy marriage the first few years we were together. Both of us spent money on whatever we wanted. Neither of us checked with the other when we did. We partied. We went out to eat all the time. It was not a pleasant period in our marriage.

We argued, we dug in our heels to defend our positions, we were relentless in our pursuit of being right. Two unhappy people found ourselves in a miserable marriage. Fortunately, we stayed with it and figured it out.

Let’s see how the three communication fundamentals apply when making a budget.

What you value should define how you spend. For this exercise, we’ll assume you are in sync on the values. If you aren’t, continue to step 2. Let one person express their views while the other listens. If taking notes helps you keep quiet, by all means, take notes. Whatever it takes not to interrupt (a difficult one for us) until the other says they’ve finished.

Once that happens, ask questions as needed for clarification. Follow the same process with the other person.

Look at the big picture things first (housing, cars, furnishings, etc.). Utilities, phones, internet, should make up the next level. Savings should be a line item. Agree on a percentage of income. From there, move to discretionary items like clothing, eating out, entertainment, and travel.

Doing this can bring you to a big-picture budget. Establish categories with spending levels for each.

If a couple isn’t willing to compromise on things, an unhappy marriage is a likely outcome. If one person has always to be right, it’s a recipe for trouble.

No couple, including us, agrees on everything. Rather than trying to convince your spouse to your way of thinking, be willing to meet somewhere in the middle. Disagreements usually come in the area of discretionary spending. Maybe one of you wants to travel more. The other may want to eat out more often.Talk through the issues and be willing to compromise in your position. That doesn’t mean compromising values. You’ve already agreed on those.

Whether it’s eating out, shopping, toys, “stuff” for the kids, or choosing a hotel when you travel, find ways to compromise to avoid an argument easily. We have an agreement to talk about any purchases outside our budget.

A recent example is the kitchen countertops. Cathy has wanted them for years. I resisted based on what I “thought” it would cost. I never actually researched it. In my head, I had a picture of how much it would cost and shot the idea down.

And we needed them. The old ones were in bad shape. I finally agreed to let her get some quotes (compromise). She is a great negotiator. The result? We now have some beautiful new countertops that were half of the price I had in my crazy head. They look great. Plus we got a new sink and faucet out of the deal.

It was a win-win.

In any marriage, one of you will make a financial mistake. You will spend money on something over the budgeted amount. Maybe it’s an impulse buy on a new dress or a $300 driver for your golf clubs. Either way, it will happen.

Beating up the guilty spouse over it will only make things worse. Go back to the fundamentals and listen to your spouse’s reasons why they did it.

I’ll tell you the truth; this is not easy. It is, however, critical to the process. Ask yourself this question – have you ever spent something outside the budgeted amount? Of course, you have. We’ve all done it at one time or another.

Another thing Cathy and I try to do in these situations is to listen as the offended party expresses how that makes them feel. Being on the receiving end of this conversation stinks. It motivates you to avoid it so you won’t be in that situation again. So, the next time you’re tempted to do it, it’s a good reminder to get in touch with how uncomfortable it is.

We’ve been at it so long this rarely happens to us anymore. We’ve learned to talk through these decisions.Both of us have made compromises over the years. Conversations about money become easier the more you have them.

It wasn’t always that way.

It takes effort. Like anything worthwhile, it’s work worth doing.

Since just about any study on divorce has money near the top of the list of reasons for divorce, it behooves us to pay attention to it. If you can have healthy discussions about money, it will be easier to talk through other tough situations. Here’s a summary of a formula to avoid having an unhappy marriage:

It’s a process that takes time, especially in the early years. You’ll make mistakes. Give grace to each other when you mess up.

Equally important, extend grace and forgiveness to yourself when you make a financial (or other) mistake. I don’t know about you, but I’m harder on myself than anyone else. If we don’t forgive ourselves, it has the same effect as not forgiving another person. It may have a more significant impact.

In our early years, we both dug into our respective positions on various things. As the years passed and we faced life’s challenges, communication became more natural. Like any marriage, we survived some difficult times over the years. Some came out of our own mistakes. Others came from things outside our control.

Crises force you to talk. If you do it healthily, it can strengthen your marriage. That’s been true for us for a long time now. But it wasn’t always that way.

Money has been a significant area of conflict at times. We didn’t always follow the communication fundamentals laid out here. Fortunately, we learned them in time. We still have our moments. But because of the work we’ve done over the years, money is usually not a part of those moments.

Communicate, listen, compromise, and forgive. It’s a formula for success to avoid an unhappy marriage.The method works whether the subject is money or any other area of conflict. At least that’s been the case for us. If you’re having problems communicating, give it a try.

Fred is the Founder and President of Leamnson Capital Advisory, LLC. He helps people preparing for and in retirement with financial, retirement, Social Security, and estate planning. At Money with a Purpose, he focuses on three primary areas: Personal Finance, Overcoming Adversity, and Lifestyle. He has been quoted in Forbes, USA Today and appeared in Money Magazine and MarketWatch, and many other publications.

Facebook7Tweet4PinEmailShares11
wpDiscuz
0
0
Would love your thoughts, please comment.x
()
x
| Reply
Share this ArticleLike this article? Email it to a friend!
Email sent!