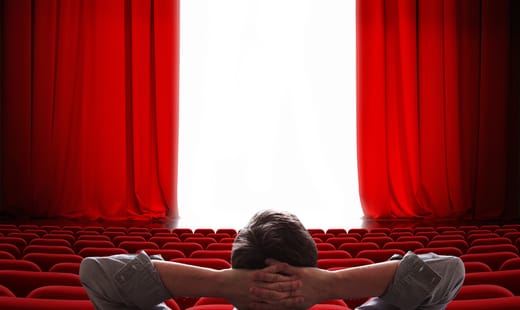 I’m not sure what it’s going to take for the older white men in the film community to see that some of the works that we have loved (and perhaps still love) have a problematic nature.

Frankly, there are a lot of white women in the classic film community that I could call out with this too but it’s mostly white men at the moment.

My current bone to pick (from a whole goddamn skeleton) is centered on the concept of blackface, comedy and film history. Where are we now in film appreciation that we have taken the Ralph Northam case and begun to apply it to comedy in film?

Here is my current case study.

I opened up my FB this weekend and what do I see? OH GOOD. Someone has collected a bunch of shots of comedians in blackface and a few in “whiteface” and made a post about it. Then, of course, proceeds to open up a discussion about comedy and blackface in film and entertainment culture.

In fairness, there are some intelligent comments. But on the whole? My head is ready to explode. And I haven’t even had coffee yet. Why do these things always happen before coffee? Is there some rule in the universe that says, “bring on the racist FB posts before Ariel has had her coffee”? I think there must be. It seems to happen too often these days. Although it could be argued that there are just more racist posts but I digress…

Most of the time I see these posts on my FB & I see Old White Guys talking and I think: the likelihood that these people are out there doing productive awesome things is very slim. They seem so intimately involved and concerned with women and #MeToo, the queers, the POC, the trans and non-binary folk that they clearly don’t have time to leave their computers to have other lives like the rest of us. So that is A THING. They are like mosquitoes, right? I mean, part of the ecosystem but like… yeah. I guess somebody out there likes mosquitoes. So that aspect of these Mosquito Men is very swattable but on the other hand? Those bites itch. This particular encounter? Yeah. This was a whole damn sedge.

So back to it. On a PUBLIC post…I encountered a guy who was just so racist and so mansplainy that…well, it makes sense that I finally looked at his personal page and he’s a Republican. But all that aside, he decided to make it his mission to tell me, a woman who has spent the last 20 years of her life engaged in film history and preservation work, all about why white people did blackface. And apparently (get this, dear reader) it is not what we have all come to believe! In fact, historians far and wide are wrong! His informed-by-armchair-PhD-discourse was centered on the following bizarre principles:

So I’m used to Old White Film Guys on the Internet telling me Everything There Is To Know About Film History because clearly, I don’t know anything.

I usually get defensive and the discussion usually goes like this:

Me: Dude, I have a few grad degrees from good Universities, been doing this for 20 years, you can stop, thx
Old White Film Dude: But there is this thing that you don’t know about and haven’t thought of.

Me: *sigh* I know about that. Actually, I wrote about it. *posts link*

Me: I love film too but flexibility is critical and we need to engage in new conversations now.

Old White Film Dude: YOU ARE NOT LISTENING TO ME. STOP BANNING ALL THE THINGS. YOU ARE A CENSORSHIP PERSON.

Me: I don’t want to ban anything. These materials continue to be critically important parts of our history and I enjoy many of them. But we need to look at them with new eyes now.

Old White Film Dude: YOU ARE A SJW POLITICALLY CORRECT PERSON AND ARE RUINING THE WORLD AND DON’T ENJOY ANYTHING.

Me: *starts to post GIFS (usually of drag queens being sassy)*

Today’s conversation went similarly but there was no sassy drag queen GIF-deployment and the guy in question didn’t go to the SJW-politically-correct-rage-place so quickly. He kinda did once I called him a racist for pointedly advocating and positively standing up for blackface. But I expected that.

There’s a lot about this post that bothered me beyond the actual fact that blackface is, without question, absolutely racist and wrong and cannot be defended. The post was full of tone-policing by the person who originally posted it which was wrong. I think he realized it had spiraled out of control when I started calling people out, I asked if anyone on the thread was actually a person of color and I just sorta…was making trouble and not shutting up. But like…that’s kinda what I do. Make trouble and not shut up (is there a dating app or job app for that personality type? if so, hit me up with that info).

As the post got “not fun” he decided to shut it down. Which is fine. His wall, his post, etc. It’s still public viewing. It’s all there for the world to see. That said, it’s still a disturbing indictment on the way that white men in the film community (and some white women) deal (or refuse to deal) with their privilege as far as media history, social communities online and racism.

What was not fine and even worse is that when I actually called him out on it (and the fact he continued to post tone-deaf photos that were making light of the pain, trauma, and lack of representation of African Americans in film/tv/media) he blocked me. All his posts are still public. These awful pictures where he jeers at “green face” (photo of The Mask) and “orange face” (picture of when The Incredible Hulk turned into The Red Hulk) and he (as expected) talks about PC sensitivity and how “thick” some people (read: me) are that they can’t understand satire.

I would say that this is White Men Anger but it is beyond that.

They are equal in the eyes of racist thought, practice and the spread of this disease and toxicity over social media.

As for me, I have a few final thoughts about White Film Dudes On The Internet:

Facebook48Tweet1PinEmailShares49
wpDiscuz
0
0
Would love your thoughts, please comment.x
()
x
| Reply
Share this ArticleLike this article? Email it to a friend!
Email sent!