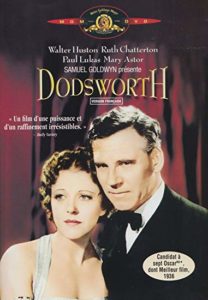 NOT TO BE MISSED: A restored print will have its premiere at the New York Film Festival— with a Q&A with Catherine Wyler, Melanie Wyler and Kenneth Lonergan — on Thursday, October 10, at 8:45 PM at Alice Tully Hall in Lincoln Center. For tickets, click here.

William Wyler got his first Oscar nomination for “Dodsworth,” launching a 20-year span of remarkable achievement and honors. He’s the most nominated director in Academy Awards history with twelve nominations. He is the only director in Hollywood history to win the Academy Award for Best Direction three times (for “Ben-Hur,” “The Best Years of Our Lives,” and “Mrs. Miniver.”) His other films include “Roman Holiday,” “The Letter,” “Wuthering Heights,” and “Funny Girl” — get the idea? Under his direction, 14 actors won Oscars. Wyler’s movies, in total, generated 127 nominations and 39 awards.

Of his films, my favorite is “Dodsworth.” Because it’s the exact opposite of today’s “event” movies. And because it’s a film no studio would greenlight today.

Here’s a checklist of elements you’d never see in a movie financed by an American studio now:
— A middle-aged love story.
— With infidelity on the part of the wife.
— Oh, and she isn’t a despicable slut.
— Oh, and her husband keeps trying to make the marriage work.

Sinclair Lewis and playwright Sidney Howard (who’d go on to win an Academy Award for his adaptation of “Gone with the Wind”) collaborated on the screenplay. “Dodsworth” was nominated for seven Academy Awards in 1937, including Best Picture, Best Director and Best Screenplay. It only won for Art Direction. If you will devote an hour and a half to this film, you will be outraged on its behalf — at the Oscars, it wuz robbed. But even more, you’ll be delighted to have had that hardest-to-find experience: entertainment so brilliantly accomplished you might as well call it Art.

The story is a simple one: Samuel Dodsworth (Walter Huston) is a rich Midwestern industrialist who sells his business and sets out to “enjoy life.” His wife Fran (Ruth Chatterton) couldn’t agree more — her daughter is just married, and the thought of growing old appalls her. She wants to be chic, she wants “to live.” She is, in short, a bomb waiting to explode.

Off the Dodsworths sail to Europe. They have barely waved goodbye to New York when Fran befriends her first suitor. Through it all Sam endures. Paul Lukas, David Niven, Gregory Gaye — he abides Fran’s suitors, as he tolerates her escalating insults. Here’s the introduction of David Niven.

Fran leads men on, then is shocked when they make advances — she’s really not very good at this game. And she doesn’t get better; she has a knack for falling “in love” with any Count of No Account who crosses her path. But Sam is no wimp. When he snaps, he is firm and manly and smart all at once.

But then, every element of the film dazzles. Especially the acting. These are complicated, sophisticated roles — the characters aren’t cardboard saints and demons, but conflicted, well-meaning people who remind us of ourselves (or, at least, People We Know). Every actor, even the young and callow, suggests a complexity we rarely see in movies today. And Sam Dodsworth’s speech at the breaking point — “ Love has to stop short of suicide” — strikes just the right note of determination and poignancy.

How does a film about the end of a marriage have a happy ending that is also grounded in realism? Credit great writing. And credit also Mary Astor, an American widow living in Italy.

It’s the rare film that, as the credits roll, makes you feel smarter. “Dodsworth” is one. Which is why it is, now and forever, on my ten best list.

As a director, he was famed for multiple takes (as many as 40) and unhelpful directions (“Again. Better.”) Here actors discuss this. Very amusing.

And here’s one great story:

“He had a quality I’ve never seen in anybody else in life,” Lillian Hellman said. “He totally forgot his good deeds. If he loaned people money, he didn’t remember that. During the McCarthy period, when he heard Hammett had gone to jail, he phoned and asked if it were true. I said ‘Yes,’ and he said he’d call back in an hour. He called back and said he’d just put a large sum of money in the bank – something like $35,000 – in my name. He said, ‘There will always be that sum of money in the bank – it’ll go in every six months and it will always be there. I have a lot of money and I want to do this. I like Dash and I love you.’ I never used much of it, and in time I returned it. Then recently we were having dinner, and I reminded him of it, and he said he didn’t remember ever doing it at all.”