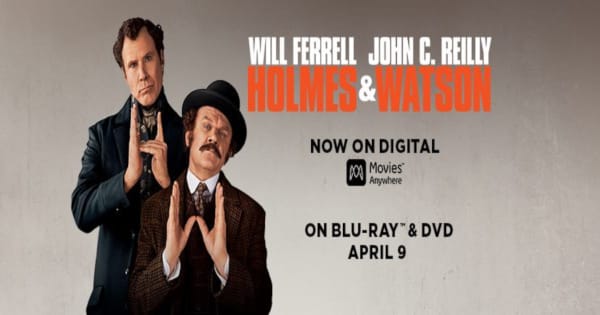 The unfunny comedy ‘Holmes and Watson’ is coming to DVD

I am familiar with the characters Sherlock Holmes and Dr. Watson. They have shown up in many ways on TV and in movies. The two Sherlock Holmes films with Robert Downey Jr. and Jude Law were a bit different but I thoroughly enjoyed them. When I heard about Holmes and Watson I had a feeling it was going to be bad. Yet I decided to give it a chance. Here is what I thought of this movie.

You can read the plot for Holmes and Watson here:

The stars of Step Brothers are reunited – this time playing the world’s greatest detective and his loyal sidekick & biographer – as Will Ferrell and John C. Reilly star as HOLMES & WATSON. Together they join forces to solve a murder at Buckingham Palace. They soon realize that they only have 5,760 minutes to solve the case, or the Queen will be next.

Holmes and Watson was a pretty bad film. I don’t think I laughed once. Which is a shame because both of these actors are quite talented. It is unclear to me why they agreed to make this movie, or why anyone thought it was a good idea. As the story progressed things only got weirder. There was a moment towards the end that had some characters breaking out in song, and it was truly hard to watch. If you like these characters I would recommend avoiding this movie. Yet I guess some people might enjoy it.